Purple belt, business owner, writer, pet parent, Jessica Sunier is a busy, accomplished woman. She took a break to sip some tea with me and share her take no shit attitude. She has solid advice on what makes a successful martial artist and business owner. Sunier does it all while making it look easy.

How did you get started in martial arts? 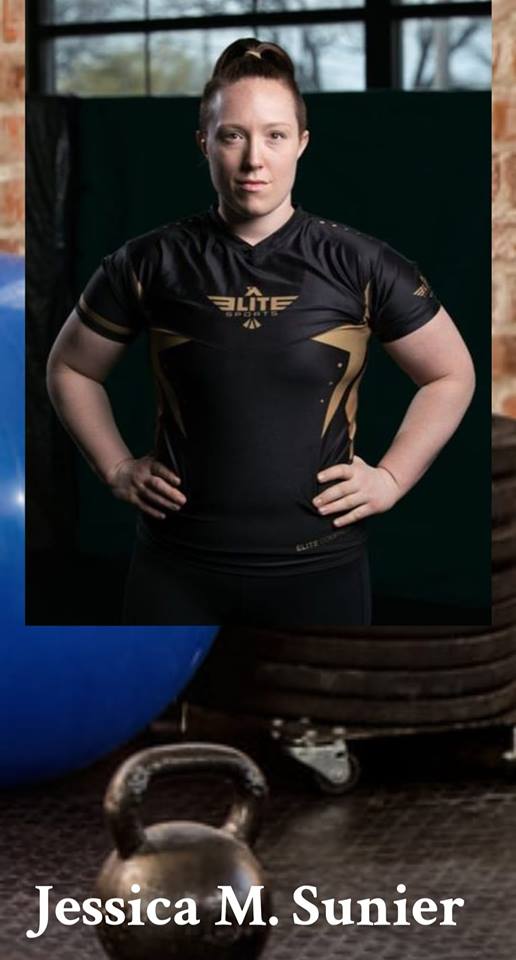 I started in bjj when my friend, Mike, told me about it back in 2012. My business was starting up and I was looking for a place to get exposure and teach some boot camp style classes. Mike suggested I start at Neutral Ground where he was. Originally I was planning on just watching, but he literally dragged me onto the mats to roll. I felt helpless, but not in danger. I was thinking I must learn more. My addiction started from there.

You run several businesses. Tell us about them.

My main one is FitPower LLC. I’m the owner and head coach. It’s a barbell gym. We just celebrated our 6-year anniversary. It started as a side hustle. I was working as a receptionist. I’d do online coaching on the side as well as run Friday night bootcamps at Neutral Ground. I dabble a bit in Advocare, a direct selling company mainly because I enjoy using their supplements. I’m a bjj coach for Red Schafer MMA. I run several classes there including competition bjj style classes as well as a women’s only bjj class. I just recently partnered with TNT Performance. I’m working with Ryan Toshner to bring play into strength training which is why he’s added in bjj to his classes.

Additionally, myself, Brie, Christine and Chris are currently working on a nonprofit. It’ll provide scholarships for Milwaukee area kids to participate in the bjj school of their choice for the months of May through August. We’ll be pulling from a lottery system. They’ll have their choice of gym because we know transportation can be a huge issue. We’re focusing our efforts on low income children.

What was your experience first starting out?

I came from a sports background, a team back ground. As a former collegiate ball player I understood working as a team. I already had the confidence you get when you feel comfortable calling yourself an athlete. The term athlete isn’t a gender thing or orientation thing. There isn’t a certain look to an athlete. If you call yourself an athlete it means you’ve probably competed in and applied your craft.

I wish all the time when I first started out that nobody would have told me to stop using my strength. I felt that as a woman specifically that was an asset that I had. I’m strong. I know I’m strong. I’d be told repeatedly that bjj isn’t about strength, which I do understand. However, when you tell a newbie not to use their strength when that’s all they have at the time because they don’t have the technique or flow yet it’s very disheartening. I doubt they meant it in the way it came off, but it made starting out a bit frustrating.

Red had a different approach. He told me I would be using my strength. We’d modify some of these moves that people said I couldn’t do. Nobody ever tells someone to stop being flexible, or too slow down if they’re naturally fast. I think someone may have been frustrated that I may hurt them which I understand or that I’m not as easily beatable as they’d like me to be. I’m not sure which ego clashed where, mine or theirs, but I’m a big believer in playing to your talents. 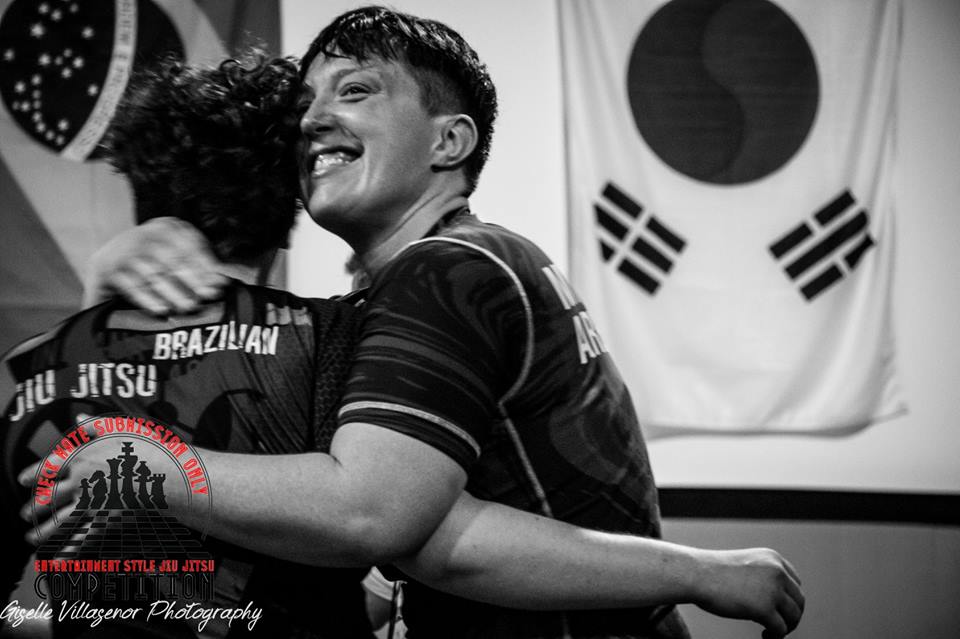 What advice would you offer to a female looking to join a martial arts gym?

The advice I offer depends on how the individual women feels when she walks in. I like to help them realize what assets they may already have and ways we can fill in the gaps. I’m a big believer in you need to be able to do the fundamentals before you can learn anything. I’m also a big believer in instead of teaching a single move I prefer to teach a chain of moves. If you don’t understand where a move came from or how to apply it then it’s not as helpful as it could be. My main goal with the women’s class is to help build confidence so they are able to protect themselves and roll with all our teammates.

When we talk about women in martial arts what routinely comes up is the topic of self-defense. When it comes to self-defense there’s not one class that is going to teach you everything you need to know to defend yourself. What bjj teaches you though is that body awareness, spacial awareness, who is around you, what is being touched on you, how to protect things around you, how to guard yourself and how to create barriers so you can’t be attacked. When I say you can’t be attacked what I mean by that is you are already being attacked, but now you’re trying to prevent further harm.

The goal is to be able to incompact  the attacker so you can get away. Training regularly changes your mentality. It allows you to walk taller, you exude a certain amount of confidence and you’re more aware of what is going on around you.

What advice would you offer to new female business owners?

First, know your worth and stick to your guns. If I say my price is this, that’s the price. We’re not going to debate it or haggle over it. If I say these are my rules, then that’s it. You are free to take it or leave it. I think a lot of people devalue their services especially in the beginning in an attempt to get clients. That can backfire though because then people always expect you to do that and it may attract the type of customers you don’t want. I think women tend to naturally be timid and it’s why we don’t negotiate as well as we could be. I had to teach the timid out of myself. While I want people to like me; I also know my worth.

Don’t fear rejection. It’s ok, especially as a coach. Not everyone is going to work well with you. It’s not personal. There’s generally nothing wrong with either side. Sometimes it just isn’t a match.

Lastly, competition is good. If you have a client that isn’t working well with your style and you know someone that they would work well with refer them there. Competition creates a community. There are so many gyms in Milwaukee, an absurd number, like any city. I don’t worry about what they’re doing. I know what my niche is and I’m working on making it the best possible. I’m working on creating a solid culture and not just following trends.

Bonus advice. In order to stay competitive, you have to stay educated. Things are constantly changing so make sure you’re investing yourself. Continue to learn. You’re never done learning and you don’t know everything. It was a big ego check when I realized that.

To read more about Jessica Sunier’s follow her blog at: https://www.jessicasunier.com/?fbclid=IwAR2BzcywwDxRNnAB1pw0kjYY4IaOJff7-gNoMub2ayhsH5MK_H5bZFs9q0o