John Gotti won his main event bout at Triton Fights 1 Friday night, at The Space at Westbury. Gotti controlled a Brazilian Jiu-Jitsu Black belt on the ground throughout the entire bout to take home a unanimous decision victory.

The Panza MMA/Long Island MMA fighter fought Anthony Wolter of East Coast MMA. The opening round Wolter chopped at Gotti’s lead leg with several kicks. Gotti and Wolter exchanged a few strikes before Wolter, a BJJ black belt, decided to seek the takedown. The two welterweights wrestled against the fence pummeling for over-under’s before the much larger Gotti dragged Wolter to the canvas.

In Round two, the newly crowned 170lbs champion scored an early takedown. Gotti used excellent positioning, pinning the submission expert with his head against the cage. Gotti worked from the guard delivering heavy body and head punches.

The much larger, stronger fighter, John Gotti, imposed his will onto Wolter throughout the entire three rounds of MMA action. Round three wasn’t much different than round two. A dominating final two rounds eliminated any doubt in the judges’ minds who won the main event. 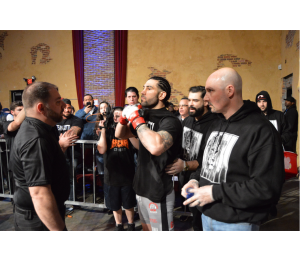 Gotti’s pace picked up toward the final moments of round three, as the chant of “Gotti” deafened The Space at Westbury Theater. Monster punches to Wolter’s rib cage and skull resembled Brock Lesnar finishing Frank Mir in their rematch.

For those who are curious, John Gotti is the grandson of the infamous John Gotti. The MMA fighter, John Gotti, has clearly made a name for himself with his hard work and dedication inside the gym. Once a light heavyweight fighter, six fights later, Gotti is the Triton Fights inaugural welterweight (170-pounds) champion.

Gotti’s victory at TF1 improved his record to 5-1. As the champion, numerous doors open, the discussion beginning ‘what’s next?’ for Gotti. Will he turn professional, or will Gotti battle one of two possible candidates? Austin Wolfson won a convincing victory Friday evening as well. Wolfson improved to 5-0 in his amateur career. The undefeated welterweight fighter is a strong striker with excellent cardio. Wolfson is an extremely tough fighter to not only take down but keep down. 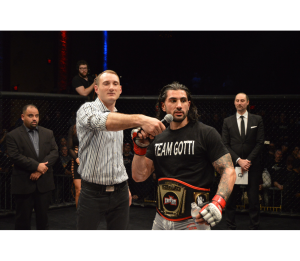 Another option would be to battle Aggressive Combat Championship, KTFO, and Cage Fury Fighting Championship title holder, Matt Roman. Roman (8-1) is on the verge of turning pro, but Roman wants to turn pro at the right opportunity.

Gotti mentioned inside the cage during his post-fight interview with commentator Eric Ott, that he’ll be back in the gym the next day. Long Island Fight fans are excited to see what’s in-store for the Triton Fights welterweight champion.