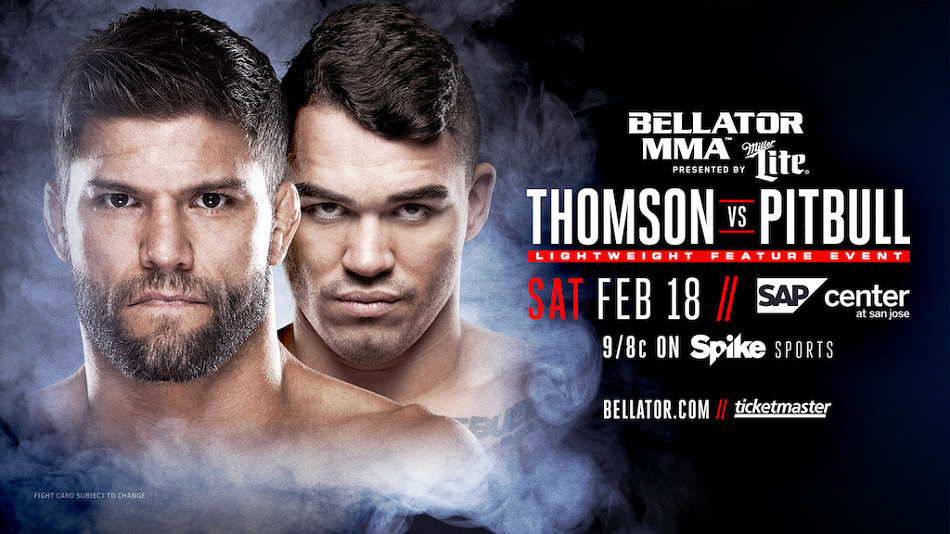 JOSH THOMSON RETURNS TO THE BELLATOR MMA CAGE AGAINST PATRICKY PITBULL FOR LIGHTWEIGHT FACEOFF AT SAP CENTER IN SAN JOSE ON FEB. 18

The contest joins a stacked main card that includes a pair of heavyweight competitors featuring Fedor Emelianenko (36-4, 1 NC) against Matt Mitrione (11-5) in the main event and Cheick Kongo (25-10-2) against Oli Thompson (17-9) in main card action. In addition, undefeated lightweights Adam Piccolotti (9-0) and Brent Primus (7-0) round out the Spike-televised main card. Additional contests will be announced shortly.

Bellator 172 will be broadcast live and free on SPIKE at 9 p.m. ET/8 p.m. CT, while preliminary action will stream on Bellator.com and the Bellator Mobile App. Tickets for the event are on sale now at the SAP Center Box Office as well as Ticketmaster.com.

After earning victories in each of his first seven professional contests, the 38-year-old Thomson joined forces with the UFC and Strikeforce, stringing together an impressive resume that included notable wins over Nate Diaz and Gilbert Melendez. Now under the direction of Bellator MMA, “The Punk” has recorded back-to-back finishes in his first two bouts with the Scott Coker-led promotion. With 16 of his 22 career victories coming by way of knockout or submission, Thomson is always a threat to end his opponent’s night early. Hailing from San Jose, Calif., Thomson hopes to put on a show in front of his hometown faithful and move one step closer to finally meeting Bellator MMA Lightweight Champion Michael Chandler.

The 31-year-old “Pitbull” enters the cage for the 17th time under the Bellator MMA umbrella, second most in the promotion’s history behind only David Rickels. The Brazilian knockout artist continues to be at the forefront of Bellator MMA’s lightweight division and has tallied six wins over his past nine bouts, including a trio of knockouts over proven veterans Rickels, Derek Campos, and Ryan Couture. Hailing from Rio Grande Do Norte, Brazil, Freire has notched 10 knockouts over his professional career, with five of the finishes coming in the opening round of action. “Pitbull” will once again look to play the role of spoiler when he tries to take down San Jose’s own Thomson on Feb. 18.