THE BOMB FACTORY in DALLAS, TEXAS

“Andrea Lee will defend her LFA flyweight title in her home state of Texas on July 14th,” stated Soares. “Andrea Lee is the first female champion in LFA history and will face a huge test against top Brazilian prospect Davina Maciel at LFA 16. Lee vs. Maciel is a fantastic title fight between two of the top flyweights in the world.”

Tickets for LFA 16 – Lee vs. Maciel are available for purchase now at TheBombFactory.com.

Lee (7-2) is one of the most talented female fighters in the world and a popular pick among fight fans to be the face of the newly announced UFC women’s flyweight division once the division takes hold later this year. “KGB” possesses a dynamic skill set, undeniable southern charm, and signature cowgirl accoutrements that has made her one of the most recognizable female fighters in the world. The 28-year-old champion now heads home to Texas to much fanfare as she prepares to defend her LFA flyweight title in the main event of LFA 16. 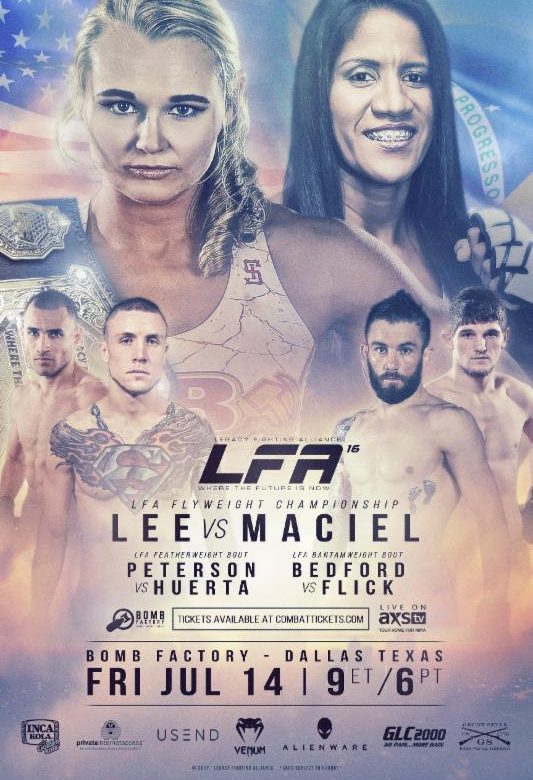 “I’m a proud Texas girl so I love that I’m fighting in Dallas,” Lee exclaimed. “This will be my fourth fight this year. I can’t wait to keep my momentum going with my first LFA title defense on July 14th!”

Maciel (6-1) is a highly-decorated Brazilian Jiu-Jitsu black belt under Cristiano Carioca. She is also a brown belt in Judo under Dejanir Nunes. The proud Brazilian fighter hails from Manaus, which is located in the state of Amazonas in the North Region of Brazil. It was there that she became an expert in various grappling disciplines before making a name for herself in MMA. Now the 32-year-old Manauense is about to realize one of her lifelong dreams. That would be competing in the United States for a world title.

“This is like a dream coming true. This opportunity coming up gives me huge satisfaction,” Maciel explained. “Since joining the sports, both MMA and Jiu-Jitsu, I had a dream of visiting and competing in the United States. Today we are one step away from this and I will strive as I have striven for all the achievements in my life. I am very grateful to LFA for this opportunity to fight for the flyweight world title at LFA 16.”

The co-main event of LFA 16 will feature a good old fashioned Texas showdown between two of Legacy FC’s most popular fighters. Former Legacy FC bantamweight champion Steven “Ocho” Peterson moves up to featherweight after headlining the inaugural LFA event at bantamweight in January. He will lock horns with fellow Legacy FC standout “The Chosen One” Angel Huerta in a bout between two fighters that competed a combined 17 times for Legacy FC. Huerta will be traveling north to Peterson’s hometown in what will be the latest chapter in the long and heated rivalry between Dallas and Houston.

In September 2016, Legacy FC and RFA officials announced that they would be merging to form the premier developmental organization in Mixed Martial Arts (MMA) starting in January 2017. Legacy FC and RFA have launched the careers of over 100 athletes that have reached the pinnacle of MMA by competing in the UFC.

LFA 16 will be the second LFA event to take place in the City of Dallas. It will also be the fifth time that the LFA has traveled to “The Lone Star State” of Texas. Further information about LFA 16 will be announced soon. The entire main card of LFA 16 will be televised live and nationwide on AXS TV at 9 p.m. ET / 6 p.m. PT.