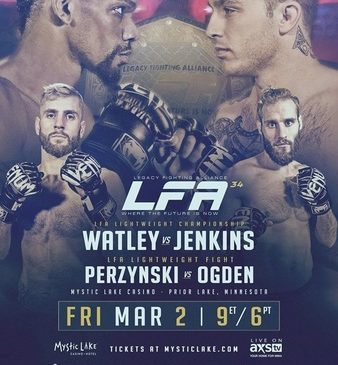 Legacy Fighting Alliance held LFA 34 from the Mystic Lake Casino in Prior Lake, Minnesota, March 2.  Robert Watley fought a technically sound if not terribly exciting match against Brandon Jenkins. He was able to capitalize on Jenkins background as a kickboxer by timing his kicks and shooting for takedowns throughout all five rounds. He was also able to consistently back Jenkins to the cage. While there were several good exchanges on the feet the majority of the fight was spent on the ground with Jenkins struggling to move Watley off of him.

One of he most entertaining fights of the night belongs to Bobby Lee and Nick Ammerman. Rumor has it that Bobby gets his red hair from the blood of his enemies. The bloodiest bout of the night showcased beautiful takedowns, grappling and striking all five rounds from both fighters. They seemed to have endless cardio as well as power shots. Easily a crowd favorite.

Alton Cunningham maintained his impressive knock out streak this weekend. He now sits at five wins, zero losses all via knock out on his professional record.

Jordan Griffin pulled off a stunning upset against the incredibly strong, skilled wrestler Darrick Minner. After getting dominated the whole first round as well as the majority of the second round, he trusted in his coach and went for an armbar picking up another win for his record.

Despite a major height difference Willie Whitehead was able to hold his own and strike well against the much taller Tim Hiley. Unfortunately, this would not be enough for him. He tapped out due to Hiley’s punishing ground and pound in the second round.