We have a truly epic preliminary fight coming this weekend in the welterweight division between two real sluggers in Li Jingliang and Dwight Grant. Both of these talents are coming off defeats, but don’t let that fool you. This fight could easily be Fight of the Night, and one of these two could easily get knocked out come Saturday night.

Jingliang came to the UFC back in May of 2014 with an 8-2 record, and while he went 2-2 in his initial four fights, he’s gone 7-2 since with five knockouts, losing only to Jake Matthews and Neil Magny since 2015.

Grant came to the UFC in December of 2018 with a record of 8-1, and has gone just 2-2 in the promotion since. He lost his debut to Zak Ottow via split decision, knocked out Carlo Pedersoli in round one, won a split decision over Alan Jouban, and was knocked out by Daniel Rodriguez in his last fight. 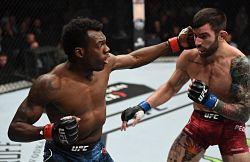 These two are always in absolute bangers, that’s what makes this fight so exciting. It’s honestly surprising these two are as low on the card as they are, they’re only the second fight of the night on the early prelims to a card that has 13 wicked fights booked on it.

We have another banger going down right after this one too between Karl Roberson and Dalcha Lungiambula, and there’s still nine fights left after that, this card is as stacked as they come! Another thing that makes this fight very compelling, they’re almost the same fighter, there’s only a couple differences between them.

Not only are these two both strikers and knockout artists, but they’re both the same type of striker. They’re both primarily boxers, and they both throw a lot of loopy-like punches with all the power in the world behind them. 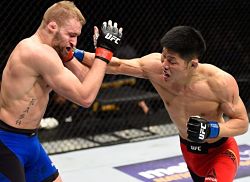 Though it is likely one of these men gets finished in this fight, it’s also likely it goes the distance. A little contradicting, but hear us out.

Jingliang has never been knocked out, he’s actually only ever been finished once, where he was submitted in round three of his back-and-forth battle with Keita Nakamura. Grant however, as mentioned above, was knocked out in his last fight, though his first two defeats were both decisions.

Grant nearly knocked Rodriguez out before being finished himself, but he blew his wad early on trying for the finish, and his arms were dead at that point. Even with the fight only lasting 2:24 into the first round, he expended too much energy and paid the price. 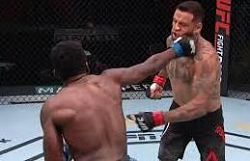 Grant may not have been around for long, and he may only have 13 professional fights, but he was one of Luke Rockhold’s main training partners at AKA while Rockhold was the Strikeforce champion, and during Rockhold’s earlier days in the UFC, back when Grant only had a couple fights, if that says anything about the talent level this man possesses.

There is one big difference between these two though, they’re not entirely the same fighter, and that’s due to their frames. Jingliang stands 6′ tall and has an average 72” reach, while Grant stands 6’1” and boasts a 78” reach. 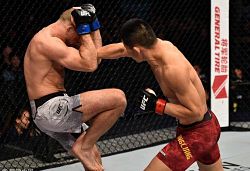 That could make all the difference in the world. If Grant uses his straight attacks, this could be a rough night for the Chinese prospect.

Sometimes they’ll mix kicks in with it; Jingliang will use leg kicks sometimes to gauge distance, and Grant will throw kicks to the body and head, but not anywhere near as often as they let their hands go.

Jingliang, 32, is also much younger than Grant, 36, but that hasn’t slowed Grant down any. If anything, it seems he comes in better every time he fights, he learns between camps, it’s evident he’s continued improving throughout his career.

This is such an exciting match up, we’re in for a real treat in this one!

Who do you see winning this epic battle of the heavy handed boxers?

By Eric Kowal 26 mins ago

By Adam Martin 28 mins ago