Coming off a first round knockout victory over Matt Frevola at UFC Fight Night 124 in January, Marco Polo Reyes talks about the win with MyMMANews.com reporter Tony Reid.

Tony Reid – In five UFC appearances you have earned three bonuses including two Performance of the Night and one Fight of the Night. Your style is a very exciting one. Where did you develop that fight finishing mindset and how are you always able to bring it to the cage?

Polo Reyes – “I attribute this mentality and this way of fighting to the fact that since I was little I liked to fight. I think it is also due to the place where I grew up and the friendships that I have had that have always given me good experiences and good techniques. I’ve always liked boxing and the style of Mexican boxing is this way, going forward but also handling the defense aspect as well. I think that’s the style I have and that’s what everyone knows about me.”

TR – Speaking of your exciting style, we saw recently at UFC Fight Night St. Louis where you stopped the dangerous Matt Frevola in one minute. What are your takeaways from that fight? 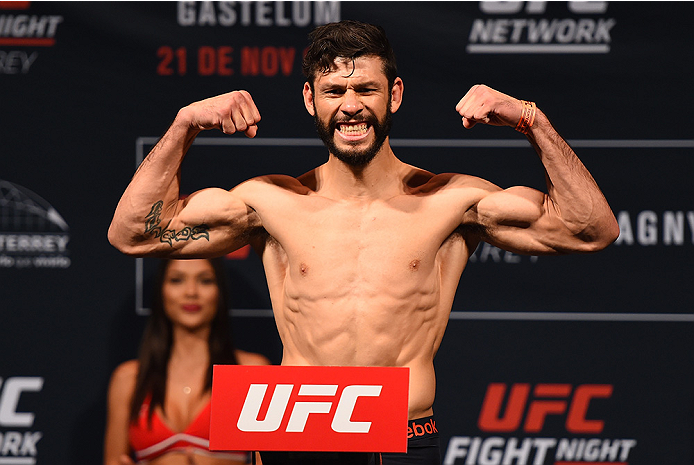 PR – “None of the fight game is predictable. We did not expect things to happen in such a good way. We were clear about what we had to do as far as strategy and we were not going to give up for any reason. Based on our gameplan, this was how we worked on our distance. I was cautious to knock down but using my boxing which is what I repeat I like to use most, because people place the Mexican boxer in high regard and respect them.”

TR – What are you looking for as far as your next challenge in the Octagon?

PR – “I need to be a more complete fighter. I want to get to a point where they do not see holes in my Jiu Jitsu or any aspect of my fight game. I want to take it to the point of real balance with the ground and my work standing up. This will give me more security to be able to face new opponents and more relevant levels of challengers in UFC.”

TR – Prior to pursuing MMA you were a carpenter. Can you share what that experience was like in comparison to your combat sports career?

PR – “Since I was 6 years old I held this job that I inherited from my family, from my dad. It is something that I suddenly miss from time to time and then I start rearranging the house and furniture and that helps me, like some kind of relaxing activity.”

TR – You appeared on TUF Latin America Season 2. What was that experience like for you?

PR – “The experience I lived on TUF Latin America was very good and at the same time it was difficult because it was six weeks in which I had no communication with anyone, not with my family, not friends, not even my girlfriend and somehow I knew that they were all fine. I did not receive any news from them yet somehow it had me calm. When meeting all my colleagues in six weeks and the fact of not having any other distraction led us to take into account that sometimes one also invests a lot of time in other issues, but if one is given enough time to meet people fully, well you can get to know them in a short time.”

TR – What was the most memorable moment from your time on the show?

PR – “To meet Dana White, to be in the place where the great legends of the UFC and the Octagon have come to fight for a place where we all want to arrive as mixed martial arts fighters. These are the type of things that make for a rewarding experience.”

TR – If you could choose one fight from your career that every MMA fan should see, which fight would you choose and why?

PR – “I think the fight that I could most recommend to fans would be the fight I had against Dong Hyun Kim. This fight helped us to know what our limit is and how much we can bear in terms of the pressure of a fight, in terms of the physical and mental demand that this case I could take as a fighter inside the UFC.”

TR – If you could fight anyone in any weight class who would you choose to test your skills against and why?

PR – “If I could choose a fight next it would be a fight with someone of my similar characteristics or someone I consider a good fit for my fight style. I would also think about the fans and people’s tastes, so I would like to fight Gilbert Melendez. I know we are working to reach that level and I am sure that as we are going we could think about that possibility. I would also like to fight Michael Johnson.”

TR – What was the most memorable moment from any training session you have been involved in?

PR – “The open workouts in Mexico City. I think that is one of the most important moments for me to this point. Also, when we trained there for a UFC Night Fight right next to Martín Bravo. It was a powerful moment and it went very well.”

TR – Who has the heaviest hands of anybody you have fought or trained with?

PR – “It is very difficult to define that because I have had colleagues who have hit pretty solid. I can say three people and they would be Alejandro Martinez from TUF Latin America 3, Masio Fullen from the first season of TUF and Jeremy Stephens who fought on the same card in the UFC and he was also my partner in camp.”

TR – Who are the people that inspire you most, personally and professionally?

PR – “It is definitely my mother who has always inspired me the most. The family is always an important pillar for everyone and now I am building my own story.”

TR – You were a carpenter before MMA, but if you weren’t a professional mixed martial artist what would you be doing for a living right now?”

PR – “I would probably still be a carpenter.”

TR – Who are your favorite fighters to watch and why?

PR – “The fighters that are most entertaining for me are definitely Frankie Edgar and Georges St-Pierre.”

TR – What is the most amazing thing you have seen in regards to the growth of MMA since the beginning of your career?

PR – “What surprises me the most is the growth of Mexican talent in Mixed Martial Arts and how Mexico is positioning itself internationally in this sport. The next generation is so strong and so complete.”