The Ultimate Fighting Championship returns to the UFC Apex Center in Las Vegas, Nevada tonight, July 24, 2021 for UFC on ESPN 27.

The card is to be headlined by former five-time UFC bantamweight champion TJ Dillashaw, who makes his long awaited return in the main event. He’s been out two-and-a-half years, but he looks to get that belt back he never lost in a fight, and it starts with tonight.

Does Dillashaw get back on track, where he left off in the bantamweight division, or does Sandhagen add another multi-time world champion to his highlight reel?

Co-headlining the event comes another bantamweight clash, this one between Kyler Phillips and Raulian Paiva, following the scrapped booking between Aspen Ladd and Macy Chiasson.

Before we get to all that, a woman’s bantamweight fight between Miranda Maverick and Maycee Barber goes down on the main card.

‘The Future’, Maycee Barber at one point in 2019 was the hottest prospect in the UFC. Starting her UFC career undefeated, Barber quickly progressed to 3-0 with three finish victories after an impressive performance on the contender series. Barber looks to end a two fight skid tonight.

Miranda Maverick stands at 9-2, with a 2-0 record in the UFC. Most recently, Maverick has been the one to watch at 125 pounds, she looks to keep record perfect inside the UFC.

Continue reading to see how this pivotal woman’s bantamweight fight went down:

Herb Dean is the man in the middle. Both woman in the center, Barber circling around the outside. Maverick trying to get the jab working. Both woman are still trying to find their range, a lot of winging shots. Maverick with the heavy pressure, she lands a huge body kick. They trade up against the fence, Barber circles out. Barber lands a straight rand hand down the pipe. Maverick investing into the body kicks. A heavy exchange ends round 1.

MyMMANews.com scores it: 10-9 to Miranda Maverick

Beginning of round two, heavy pressure again from Maverick. Maverick starting to switch up her kicks. They get close and engage in a clinch, Maverick keeps Barber up against the cage. Barber goes for a takedown of her own but Maverick uses the whizzer to get the fight against the fence. Barber lands a few elbows in the clinch and she disengages. Maverick shoots for a double leg and gets the takedown and immediately gets to Barber’s back searching for a submission. The round comes to a end.

Maverick pops Barber with a straight right to start the round. Barber picking up the pace in the third round. A heavy exchange from both woman, Maverick swings with power. Barber lands a right and steps in to clinch, she gets the takedown. Let’s see what Barber can do with the takedown. The strength of Maverick is evident, she powers right back up. Barber pushes Maverick up against the cage. Barber lands a spinning elbow of the break. Both woman are swinging to the end of the fight, Barber changes levels to end the round. 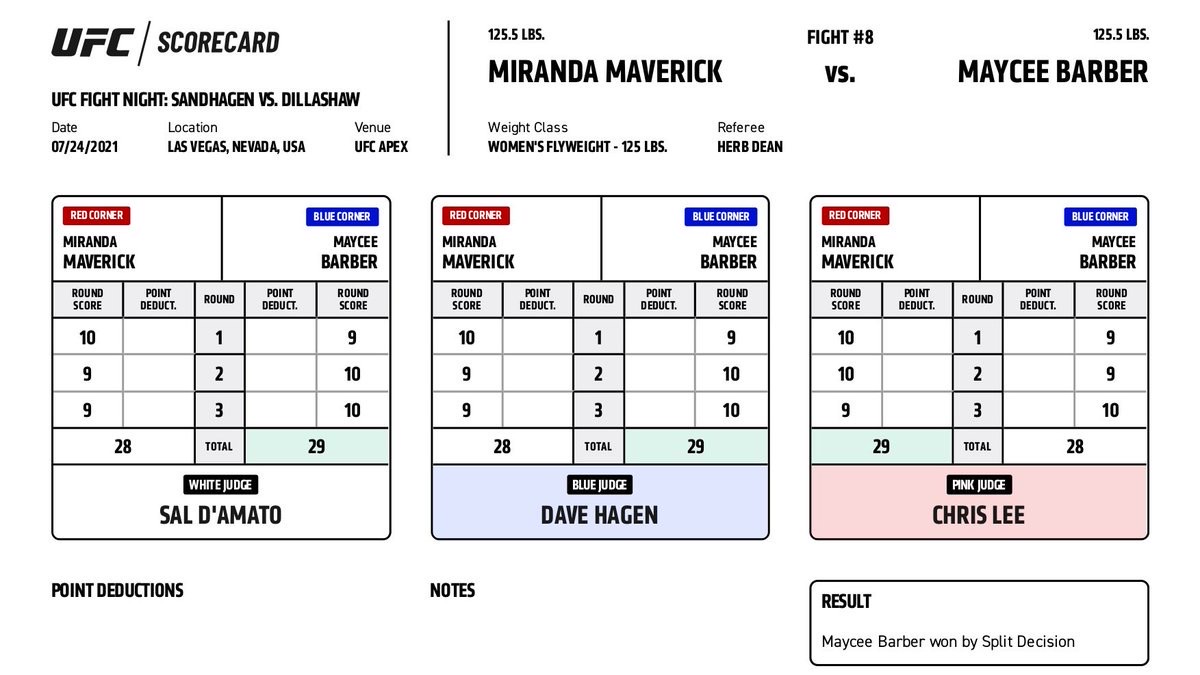 By Alex Behunin 10 mins ago

By Andy Stevenson 24 mins ago