We’ve got an absolute prodigy in the UFC’s lightweight division that most fans haven’t heard of, and his name is Arman Tsarukyan.

This kid is so incredibly talented and well rounded, we can only imagine he’ll win a few world titles before his career is all said and done. He came to the UFC in April of 2019, where he was first slated against Islam Makhachev. 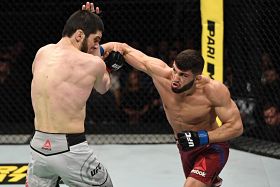 After losing that fight via unanimous decision, he went on to win his next three, improving his professional record to 16-2 in the process. Though he lost the Makhachev fight, it was quite a close contest. He was taken down a couple times, but got right back up each time, and even took Makhachev down once himself.

Tsarukyan also out-struck Makhachev 60-47 in total strikes, landing 66% of them. Next came a bout against Olivier Aubin-Mercier, who he handily out-classed to a unanimous decision victory, taking him down twice, and out-striking him 110-36, landing 63% of those strikes. Mercier was on a four-fight win streak with three finishes coming in.

The Armenian prospect then out-classed world BJJ champion Davi Ramos to a unanimous decision victory, taking him down just once, but out-striking him 118-49 in total strikes. 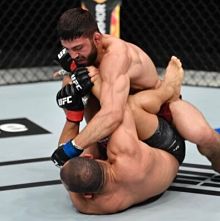 This brings us up to his most recent bout, where he defeated Matt Frevola via unanimous decision on one days notice at UFC 257. He was initially slated against Nasrat Haqparast, and while that was going to be a great fight, we got a great fight out of him against Frevola as well.

Tsarukyan took Frevola down a total of ten times in twelve attempts, astounding numbers, and out-struck him 103-51 in total strikes. He’s as dominant as they come, and he’s already so good at everything. Tsarukyan nearly secured a D’Arce choke toward the end of round two, but decided not to risk it and give up position.

That’s the one thing fans could criticize Tsarukyan for, he isn’t much of a finisher, at least yet. However, he’s still just 24-years-old, and he’s also still pretty brand new to the sport. He only made his professional debut in September of 2015. 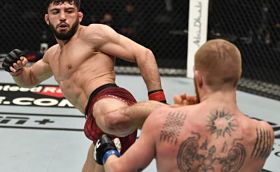 To think, this kid wasn’t even a professional fighter when Conor McGregor fought Chad Mendes for the interim UFC featherweight championship at UFC 189; hell, he only fell to 1-1 the same night McGregor fought Jose Aldo.

The cap to this young man’s potential doesn’t exist, he is a truly extraordinary talent. He also won the MPF lightweight championship and defended it once before coming over to the worlds leading mixed martial arts promotion.

Not only can Tsarukyan do it all, but he can blend to together better than anyone as well. The way he can transition from striking to grappling, not to mention his scrambling abilities, he’s one to watch, that’s for certain.

Standing 5’9” with a reach of 72”, Arman Tsarukyan is going to be a straight up handful for everyone he ends up facing.

If you enj0yed this piece, please feel free to share it on social media!