Undefeated Ukrainian mixed martial arts fighter Yaroslav Amosov has been nothing short of astounding since we first saw him compete. He came to Bellator in July of 2018 with a 19-0 record, and he’s gone 5-0 in the promotion in the two years since.

Amosov improved his record to 24-0 this past Friday at Bellator 244 with his TKO victory over the 11-1 Mark Lemminger. He’s dominated every fight he’s been in, as his record reflects, and he’s still just 26-years-old, turning 27 next month. 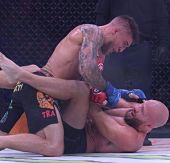 In his three fights before joining Bellator, Amosov won the Tech-KREP FC Welterweight Championship and defended it twice. Once arriving to Bellator, he defeated UFC veterans Gerald Harris and Erick Silva in back-to-back appearances, both via unanimous decision.

Yaroslav Amosov then defeated longtime Bellator veteran David Rickels, who’s only lost to the very best in the promotion. He became the first man to submit Rickels, as he got the tap with a D’Arce choke in round two. His next fight was the most impressive performance of his career, where he defeated Ed Ruth via unanimous decision.

This fight was so impressive because of Ruth’s potential, and because of his wrestling background. Ruth went 136-3 at Penn State throughout his collegiate career, and is a three-time NCAA Division I National Champion, while he took third place in his freshman year. He also went 20-0 in NCAA championship matches, 5-0 each year, it’s a wonder why he took bronze his first year. 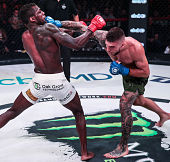 Ruth is also a four-time NCAA Division I All-American, as well as a four-time Big Ten Conference Champion, which is a pretty big deal. He did that during the four years he attended college, and he kept at it after graduating.

He became the 2013 US University National Championships gold medalist, a US World Team Member in 2014, a US Open bronze medalist that same year, a US World Team Trials silver medalist in 2015, and a US ASICS National Championships bronze medalist that same year. Ruth even beat Daniel Cormier’s teammate and Olympic freestyle wrestler Deron Winn by tech fall (12-2) in 2015.

Both Amosov and Ruth failed on their first couple takedown attempts, but ultimately, Amosov scored one takedown in each of the three rounds to Ruth’s one throughout the fight, and he looked great on the feet as well.

To out-wrestle someone like Ruth, it’s a real statement, it’s a huge deal. Ruth has been wrestling since he was eight years old. He’s one of the best wrestlers in the country, and has been for some time. 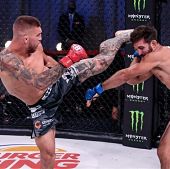 Amosov can mix it up as good as, if not better than anyone out there. The seamless transitions from striking to wrestling to grappling he has, it’s incredible. There’s a reason this kid’s 24-0. He’s been facing good competition too, but it’s time for a step up, considering he’s been dominating everyone quite handily.

He’s up there with Khabib Nurmagomedov and Khamzat Chimaev as far as dominance, and that really speaks volumes, if his record doesn’t already. Amosov has numerous credentials in Sambo as well, just before, and at the beginning of his mixed martial arts career. 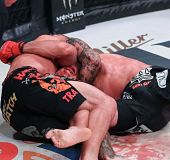 Of his 24 wins, he has 19 finishes with nine knockouts and ten submissions. His submission attack is also very diverse, having three rear naked chokes, two armbars, two north-south chokes, one D’Arce choke, and two anaconda chokes. Not to mention, he’s as good as anyone at getting the fight to the mat in order to use these lethal submissions.

This begs the question, what’s next for Yaroslav Amosov? He’s ran through everyone that’s been put in front of him since he started this journey, and it’s been a real privilege to watch. He has all the potential in the world to go down as a true great in the sport.

Jon Fitch would be a good test for him, he’d be by far the most experienced fighter Amosov’s ever faced. Fitch had an incredible run in the UFC, one that even many of the best fighters in the world aren’t capable of.

He won his first eight fights in the UFC, before losing to Georges St-Pierre in a title fight. He then won his next five after that as well. He was as dominant as anyone in the game without consistently finishing fights. He got his start in wrestling, where he went 45-51 in the NCAA Division I bracket. Though he wasn’t the most successful wrestler in college, he knew how to make it work in MMA like no other. 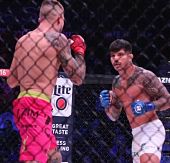 MacDonald is one of the best welterweights on the planet, and though this fight ended in a draw, most believe Fitch won. That’d be a great test for Amosov. There’s also UFC veteran Lorenz Larkin, who’s on a four-fight win streak in Bellator, with one of those wins coming against former Bellator Welterweight Champion Andrey Koreshkov.

Logan Storley would also be a good match up, he’s gone 6-0 in Bellator, improving his record to 11-0 in his last fight this past November. He’s a four-time NCAA Division I All-American, and he placed in fourth twice, sixth once, and third once in the NCAA Division I National Championships.

Soon enough, everyone will know Yaroslav Amosov’s name, it’s only a matter of time. If he keeps this pace up, he’ll have every record in Bellator along with the belt and numerous title defenses. It’ll be very interesting to see what the future brings for this young assassin.

Who would you like to see Yaroslav Amosov fight next?