Cage Warriors two-division champion Mason ‘The Dragon’ Jones hasn’t had the best of goings since coming over to the UFC, despite putting forth two great performances. 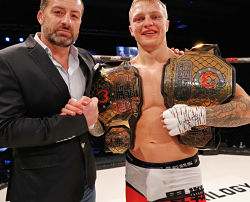 Jones came over to the worlds leading mixed martial arts promotion with a perfect 10-0 record, only to receive two immediate blemishes upon arriving, falling to 10-1 (1 NC).

It’s very unfortunate, because he really could, and probably should be 12-0 right now.

His first fight came against Mike Davis (8-2) in January of this year, a bout he lost via unanimous decision.

Jones showed his incredible durability in this bout, and more people thought he won than lost, aside from the judges. He out-struck Davis in significant strikes, as well as in total strikes, though the numbers were close, and he got right back up the couple lone times he was taken down.

Nonetheless, this fight showed us he’s ready for the big show.

His pressure and offense in this fight was really something to behold. He has that Colby Covington or Gregor Gillespie-like pace, but more so with his striking than wrestling, kind of like Max Holloway. 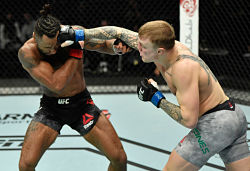 Next came a bout against UFC veteran Alan Patrick (15-3), who he was absolutely dominating up until it was stopped, resulting in a no contest toward the middle of round two. He looked even better in this fight than he did in his promotional debut.

Jones pressured Patrick the entire time, evaded most of his strikes, and ended the first round on top after a couple late takedowns. It didn’t stop with the takedown either, Jones’ ground-and-pound is absolutely vicious.

Maybe that has something to do with the Jones name? 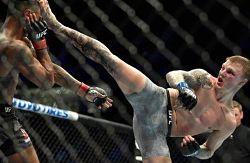 ‘The Dragon’ did get hit a couple times, as he did against Davis, and Patrick is a powerful dude, but he’s as tough as they come. That only makes him march forward with even more intent, making him more dangerous.

Jones secured a beautiful inside trip to start round two, before Patrick returns to his feet about 80 seconds later. He doesn’t have any room to breathe though. Jones is all over him, and unfortunately, pokes Patrick in the eye during an exchange.

This is of course why the fight ended in a no contest, and why he is still in search of his first octagon win.

Some could say this is how they expected his early UFC career to go, and others not so much. He did turn in two great performances, but he didn’t pick up a victory in either. That’s definitely surprised most of his fans. 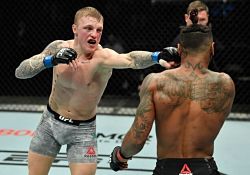 What he’s shown us in just these two fights however, and of course what he did prior, he has all the potential in the world. Prior to joining the UFC, as previously mentioned, he won the Cage Warriors lightweight & welterweight championships, both via very impressive finishes.

Jones is also 4-0 as an amateur, 3-0 as a professional boxer, and boasts black belts in Brazilian Jiu-Jitsu, Judo, Kickboxing, and Taekwondo. He also holds numerous national and regional BJJ & Judo championship medals.

Not to mention, he was the No. 1 ranked lightweight in Europe, and the No. 5 ranked welterweight in Europe prior to coming over to the UFC. At just 26 years old, all of that is quite remarkable. He has being a student of the game since age seven to thank for that.

Needless to say, Mason Jones has all the potential in the entire world, and that’s saying a lot given the division(s) he competes in. He’s a natural lightweight, which is the most stacked division in the whole promotion. 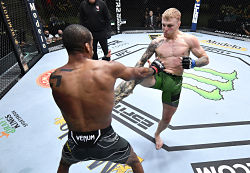 Having won a title at welterweight shows he’s capable of competing there as well, and that’s either the second or third most stacked division. Featherweight, or welterweight, could rightfully have the No. 2 spot.

When he was asked if he has any heroes before, Mason Jones simply answered, “Why have heroes when all you see is targets?”

That’s a championship mindset if we’ve seen one.

At 155 lbs though, how far can this young prodigy take it?

By Adam Martin 27 mins ago

By Ryan Truland 6 hours ago