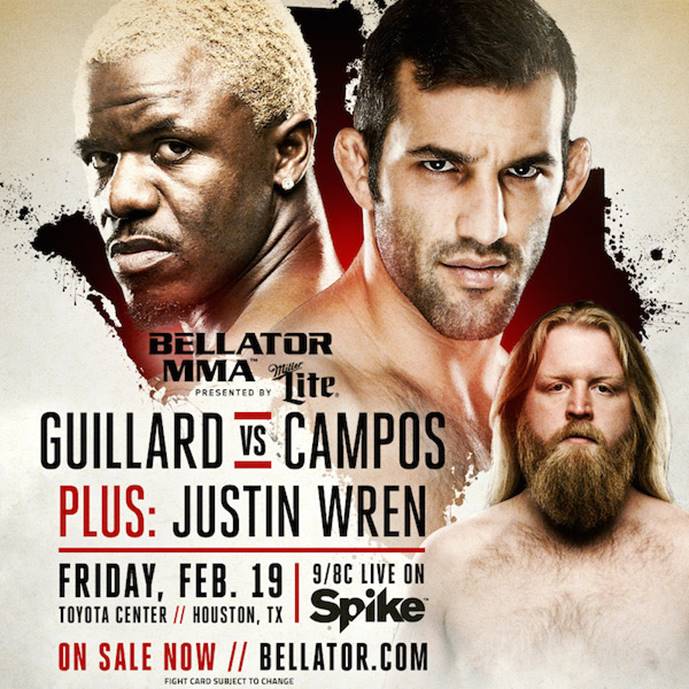 SANTA MONICA, CALIF. (February 2, 2015) –An injury to Mike Bronzoulis has shifted things during the SPIKE-televised main card of “Bellator 149: Shamrock vs. Gracie” on Feb. 19 at Toyota Center in Houston, Texas. Now, the lightweight contest will pit Melvin Guillard (32-15-2) against Derek Campos (15-6).

In addition, Justin “The Big Pygmy Viking” Wren (11-2) returns to action in what will be his second appearance under the Bellator MMA banner, when he meets Juan Torres (4-4) in heavyweight fisticuffs.

The fights join a card that already features a double main event — Ken Shamrock (28-16-2) meets Royce Gracie (14-2-3) for a third time and Kimbo Slice (5-2) will fight the man who has been calling him out since their friendship ended years ago, Dhafir Harris, better known as “Dada 5000” (2-0). In featherweight action, Emmanuel Sanchez (12-2) will look to continue his torrid pace when he meets Daniel Pineda (21-11) and former light heavyweight titlist Emanuel Newton (25-9) battles Linton Vassell(15-5).

Tickets for this mixed martial arts extravaganza start at just $50 and are on sale now at Bellator.com, as well as HoustonToyotaCenter.com, the Toyota Center Box Office and Houston area Randall’s locations.

Guillard suffered a horrific broken hand during his Bellator MMA debut againstBrandon Girtz earlier this year. “The Young Assassin” has made it clear that he intends on eventually fighting for the 155-pound title, and his road to the gold begins on Feb. 19 against a tough Texas native with plenty to prove. Of Guillard’s 32 wins as a professional, 23 victories have come before reaching the judges’ scorecards.

Known as “The Stallion” to those familiar with his mixed martial arts career, Campos will come into his meeting with Guillard riding a two-fight skid. During his eight-fight tenure with Bellator MMA, the 27-year-old Texan has faced a plethora of top lightweight talent, going up against names the likes of: Michael Chandler, Patricky Freire, Brandon Girtz (2x), and Estevan Payan.

You would be hard-pressed to find a better story in all of MMA than the one that Wren can tell. The two-time National High School Wrestling Champion generated massive amounts of media attention on the road to his promotional debut at “Bellator 141: Guillard vs. Girtz,” where he defeated Josh Burns. His story begins several years earlier, in 2010, when Wren confronted an opponent tougher than any he could face in combat sports: addiction.

With an opportunity to continue fighting on the table, Wren left the sport and began his recovery process. A chance meeting with a friend led Wren on a trip to the Democratic Republic of the Congo, where he came across and developed a deep connection with the Mbuti Pygmies, many of whom were enslaved, living on only the scraps the slave masters would pay them with. Wren found his calling there and wanted to do everything in his power to help the Pygmies. With multiple visits to the Congo, including a stint that lasted a year, Wren started a foundation called “Fight for the Forgotten.” Through his efforts, Wren and his staff of 17 have systematically bought the land of the slave owners, and have thus far legally given 2,740 acres of rainforest to the Pygmies, effectively freeing them from slavery.

Partnering with other groups like Shalom University and joining forces with Water4.org, Wren and his charity are responsible for drilling 26 water wells to help provide both the Pygmies and the former slave masters with clean water, and have plans to drill hundreds more. In addition, the team has begun a sustainable farming project to benefit and provide food to both the Pygmies and non-Pygmies of the community.

Take a look below at the complete 19-fight “Bellator 149: Shamrock vs. Gracie” card and be sure to tune into SPIKE on February 19 at 9 p.m. ET/8 p.m. CT for an event that has something for every fight fan.

By Kyle Carroll 7 hours ago

By Mary Hartman 15 hours ago