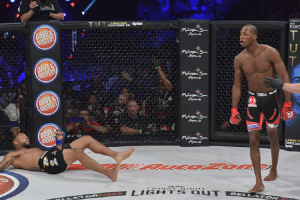 SANTA MONICA, Calif. (October 5, 2015) – Michael “Venom” Page (8-0) looks to remain undefeated to begin his exciting career, when he faces Charlie Ontiveros (6-3) in a welterweight contest at “Bellator 144: Galvao vs. Dantas 2” at the Mohegan Sun Arena in Uncasville, Conn., on October 23.

The bout will take place during the main card of “Bellator 144: Galvao vs. Dantas 2,” which airs live and free on Spike at 9 p.m. ET/8 p.m. CT, while preliminary bouts will stream on Spike.com at 7 p.m. ET.

Tickets for “Bellator 144: Galvao vs. Dantas 2,” which start at just $25, are on sale now at Ticketmaster.com and the Mohegan Sun Arena box office. Doors for the event open at 6:00 p.m. ET local time, and the first contest takes place shortly after.

Page will be competing for the second consecutive event at Mohegan Sun, a venue that just played host to “Venom” finishing Rudy Bears at “Bellator 140: Lima vs. Koreshkov.” A resident of England, the 28-year-old utilizes his unorthodox style to open up his opponents for his vicious, lightning quick strikes. This is evident when glancing at his record, which boasts eight wins, all before reaching the judges’ scorecards.

After fighting exclusively for regional promotions in his home state of Texas, Ontiveros will enter the Bellator MMA cage for the first time against one of the most exciting strikers in the sport. The 24-year-old “American Bad Boy” was most recently in action this past August, defeating Bilal Williams via decision at Legacy Fighting Championship 45.