Mike “No Mercy” Serrano has a justifiable nickname due to the relentlessness and constant pressure he puts on his opponents in the cage. 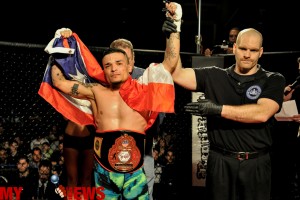 This Friday, “No Mercy” will take the step into the professional rankings as he’s ready to face Steve Jones at WCC 19 at the Spooky Nook in Manheim, PA.

Tune in below as Mike “No Mercy” Serrano goes head to head with MyMMANews’ own, Adam Crist as Mike discusses his upcoming pro debut, how he thinks it’ll end, his coaching team and much more!

By Cole Shelton 6 mins ago