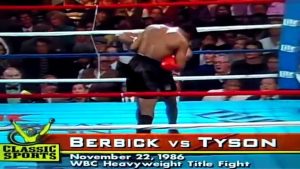 He was only about 20-years old when it happened, and nobody could have predicted the future that would soon follow, but 30 years ago, on November 22, 1986, one of the greatest heavyweight boxers of all-time, Mike Tyson, claimed his first professional title.

Tyson won his first 19 professional fights by knockout, 12 of them in the first round.

‘Iron Mike’ was given his first title fight against Trevor Berbick for the World Boxing Council (WBC) heavyweight championship. Tyson won the title by second round TKO, and at the age of 20 years and four months became the youngest heavyweight champion in history.

In 1987, Tyson added the WBA and IBF titles after defeating James Smith and Tony Tucker. This made him the first heavyweight boxer to simultaneously hold the WBA, WBC, and IBF titles, and the only heavyweight to successively unify them.

In 1988, Tyson became the lineal champion when he knocked out Michael Spinks in 91 seconds of the first round.

The Downfall of Iron Mike

In 1990, he lost his titles to underdog Buster Douglas, who knocked Tyson out in the tenth round. Attempting to regain the titles, Tyson defeated Donovan Ruddock twice in 1991, but pulled out of a fight with then-undisputed heavyweight champion Evander Holyfield (who had defeated Douglas later in 1990) due to injury.

In 1992, Tyson was convicted of rape and sentenced to six years in prison, but was released after serving three years. After his release in 1995, he engaged in a series of comeback fights. He won the WBC and WBA titles in 1996, after defeating Frank Bruno and Bruce Seldon by knockout. With his defeat of Bruno, Tyson joined Floyd Patterson, Muhammad Ali, Tim Witherspoon, Evander Holyfield, and George Foreman, as the only men in boxing history to have regained a heavyweight championship after having lost it. After being stripped of the WBC title in the same year, Tyson lost the WBA title to Evander Holyfield by an eleventh-round stoppage. Their infamous 1997 rematch ended when Tyson was disqualified for biting Holyfield’s ears.

In 2002, Tyson fought for the world heavyweight title at the age of 35, losing by knockout to Lennox Lewis. Tyson retired from professional boxing in 2006, after being knocked out in consecutive matches against Danny Williams and Kevin McBride.

Even with all of the controversy Tyson is still one of the most famed fighters to have ever lived. He is a top selling author, an actor, and even has his own cartoon mini-series.

Tyson was ranked No. 16 on The Ring’s list of 100 greatest punchers of all time, and No. 1 in the ESPN.com list of “The hardest hitters in heavyweight history”. Sky Sports rated him as “the scariest boxer ever” and described him as “perhaps the most ferocious fighter to step into a professional ring.” He has been inducted into the International Boxing Hall of Fame and the World Boxing Hall of Fame.