Miranda “Danger” Granger has put the world on notice only five fights into her professional career. She has finished all five of her fights, only leaving the first round once. In her last two fights, she took out veterans of both Invicta FC and Dana White’s Tuesday Night Contender Series. For her next act, Granger will look to add the inaugural Cage Fury Fighting Championships (CFFC) strawweight belt to her collection when she faces Heloisa Azevedo on May 25 at CFFC 75.

In her last fight, Granger made her CFFC debut at CFFC 71 against Jamie Colleen. Colleen had previously competed twice on the Contender Series, defeating Tiffany Masters during the first season and losing to Maycee Barber in the second season. The CFFC 71 fight took place in Atlantic City, N.J., a long way away from Granger’s home state of Washington and the fight was her first fight outside of Washington. Yet, Granger had one of the largest fanbases in attendance as close to 400 members of “Danger Nation” rooted for her. The experience was a positive one for Granger, but she did learn a few lessons as well, especially about cutting weight on the road.

“Definitely a different experience, definitely the weight cutting process for me was a little bit different. So typically, I’ll cut a little bit of weight the night before weigh ins, and then the morning of weigh ins, I’ll cut like two pounds or whatever and go to weigh ins, weigh in and everything is great. Just with the way everything was working, we had to do a photo shoot and sign some posters and a couple other things and then weigh in. So when we landed in Atlantic City, it was probably about, I’d say ten pm and by the time we got checked in and stuff it was midnight. So my coach and I actually found a 24 hour gym with a sauna and I ended up cutting the rest of my weight that night and I was up till 3:30/4 am cutting weight and just slept. Woke up, did everything I needed to do. I actually woke up a couple of pounds underweight so I got to hydrate a little bit which is nice.”

The fight itself was expected to be a war. CM Punk, who is a commentator for CFFC, even mentioned it would be a ‘fight of the night’ candidate as the fight got started. But after about 30-seconds of striking, Granger clinched with Colleen who proceeded to take her down. After attempting a guillotine, Granger switched to an armbar and was able to get the tap two minutes and eleven seconds into the first round. In fact, the worst damage done to Granger was by her coach who accidentally gave her a bloody nose while they were warming up.

“It’s actually funny, my last fight with Amy Montenegro, we were warming up and I like to get a really good warm up, so we usually fight a full round before I even get out to the cage and he gave me a black eye before my last fight and before this fight, he gave me a bloody nose, so it’s like this is going to be a trend, I get beat up by my coach before I get to the cage,” Granger said laughing. “It’s fun, Charlie (Charles Pearson of Charlie’s Combat Club) and I know each other since the day I was born so we have a really good relationship. It’s funny now but at the time we were like, “are you kidding me?””

Because of her success, Granger has grabbed the attention of the MMA world. She has done interviews with the likes of James Lynch and has been featured in Shawn Bitter’s Scouting Prospects for the Contender Series Season 3 series. And that attention doesn’t bother her at all.

“I think from a really young age; I’ve always liked being in the spotlight. I’ve always liked that type of pressure. Seeing my name in that kind of stuff, it just motivates me. It’s something I’ve been working for my whole life.”

In fact, she told her grandmother she would be famous one day when she was little and it’s coming true.

“My grandma always makes this joke, I signed this little piece of paper for her when I was in third grade and underneath it, it says, “keep this, one day I’ll be famous.” And she has it framed on her wall.”

Granger is living her best life every day, loving what she is doing and hopeful she can build a long career in the sport, even when she retires.

“I love this whole life; I love this whole experience. I know a fighter’s career as a fighter is not very long, it’s not a life long thing, but if I can make a name for myself, then hopefully I can pursue something in the field in the future.”

Possibly as a commentator.

Before she gets on the mic, Granger is heading back to the CFFC cage to face Heloisa Azevedo on May 25 at CFFC 75. This will also be CFFC’s first appearance in California and Granger will once again have to travel for the fight. But the trip is worth it for Granger as another belt is on the line in CFFC’s inaugural strawweight title and she is glad to be a part of history.

Granger hasn’t had much time to show off much of her skill set because of lack of cage time, but there is one aspect of her game she really wants to showcase.

“I think my stand up game hasn’t been as showcased as much as I’d like.”

And though she wishes to show off her complete arsenal, Granger believes she will get another finish.

Granger and her coach decided that the pull of CFFC’s title was enough for them not to wait and see if she was going to be asked to fight on the Contender Series. But with a win, she might still get a call or a call straight to the big show.

Get out of my cage. #dangeroustimes

If she does get another impressive finish, Granger will be one step closer to getting to the big stage. She and her coach decided they couldn’t turn down such a good opportunity in this CFFC fight instead of waiting to find out if there would be an opportunity to fight on the Contender Series. But it’s possible that another opportunity might arise.

To watch Granger and the entire CFFC 75 card, tune into UFC Fight Pass on May 25. 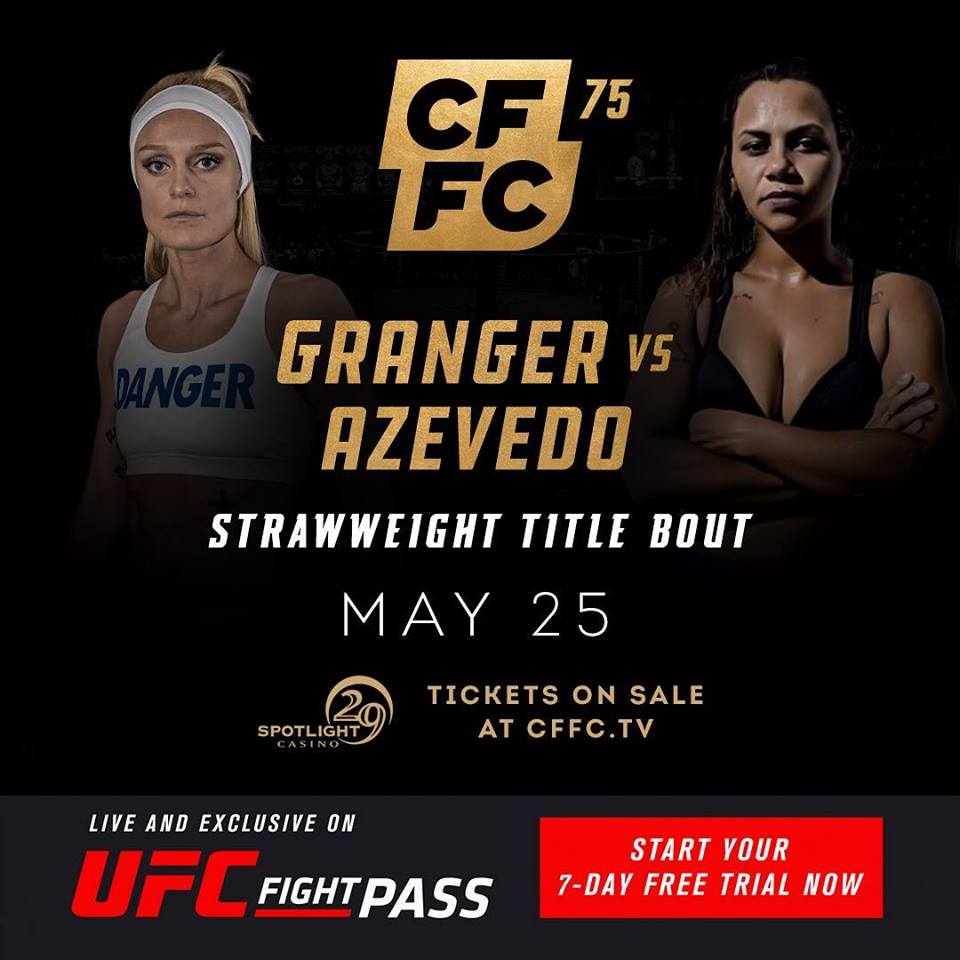