The WSOF 34 event was held on New Year’s Eve, just hours before, and less than a mile away from where the ball dropped in Times Square.  Thousands of fans packed the Theater at Madison Square Garden where after the first fight in the decagon, the statement was read and presented.

“It was great to sit and talk about what this means to local fighters like myself with my good friend Angelo Santabarbara. I thank him for his support and for including me in his efforts as a local voice from Amsterdam,” said Tommy Marcellino.

Marcellino, one of the competitors on the #WSOFNYC show lives in Amsterdam, New York, one of the cities in Santabarbara’s district, defeated Matt Denning via armbar in the first round on Saturday.  Marcellino had a sea of supporters at the Garden, many of them wearing yellow colored shirts that read “Tommy Gunnz” across the chest.

“For too many years our Mixed Martial Arts fighters have had to leave the state to compete professionally,” said Assemblyman Santabarbara.

“We continued the fight to finally make MMA legal in New York State so that our local athletes could finally get a chance to play the home game. And today, I’m proud to put the spotlight on one of Amsterdam’s local favorites, Tommy Marcellino,” said Santabarbara.

Nicole Parisi, Chief of Staff, Office of Assemblyman Angelo Santabarbara told MyMMANews today that the Assemblyman’s office called Marcellino this morning to congratulate him on his victory once again.  Both Parisi and the Assemblyman were at the Garden to witness the event unfold yesterday.

Assemblyman Santabarbara was one of the strong advocates and backers of the MMA bill that was passed earlier this year permitting mixed martial arts events to be sanctioned in New York. Marcellino was one of the athletes that the Assemblyman’s office worked with to help get the legislation passed.

The Assemblyman’s office hopes to see more events like World Series of Fighting come to the Upstate New York and the 111th Assembly District in areas such as Schenectady and Amsterdam.

“We are hoping to bring more professional MMA events to New York and especially to Upstate New York and the 111th Assembly District.”

“The UFC has been to New York earlier this year, and this is the first time here for World Series of Fighting.  The more events we have in the state, the better off it will be.” 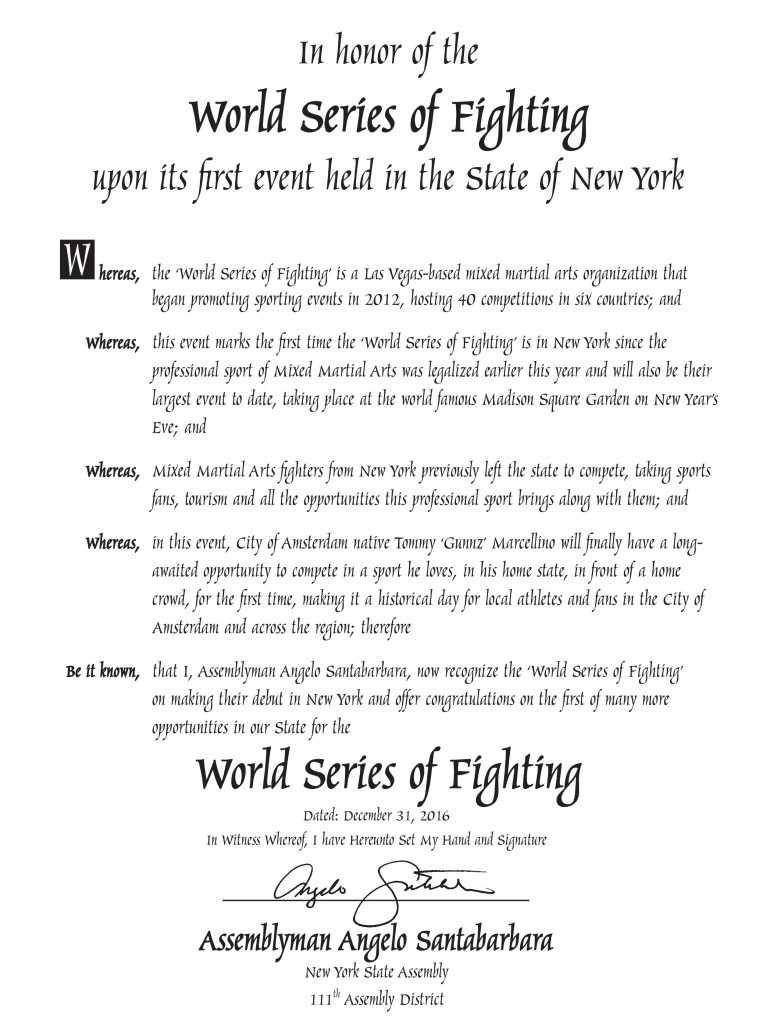