RDR has captured gold in two weight categories and is aiming to advance in the hierarchy of a third.

Buchecha was one of the hulking individuals caught in the proverbial crosshairs as de Ridder posted multiple heavyweight callouts via his personal Instagram. 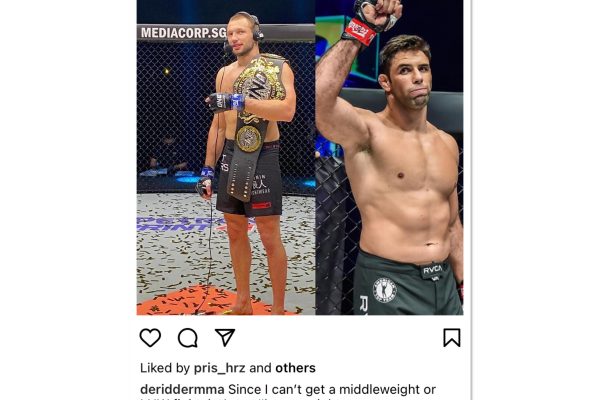 Marcus Buchecha Almeida is coming off of a first-round submission victory over Kang Ji Won at ONE: Winter Warriors earlier in the month. A caliber of win that had many thinking Buchecha could contend for the heavyweight title next considering Kang Ji Won’s momentum heading into that clash.

de Ridder captioned that post by saying “In MMA this would be way too easy but maybe you can last a round in Muay Thai. What do you think?”

Earlier in the calendar year, Reinier de Ridder was initially calling for a third title opportunity outright. With a focus on fighting current reigning ONE heavyweight belt holder Arjan Bhullar.

The matchup never seemed to get beyond a conceptual stage. As Bhullar is seemingly on a path to defend his gold against Anatoly Malykhin.

No specifics are out on the Malykhin vs Bhullar negotiations. But there are ONE Championship pundits and fans alike who are making the inference that will be the next heavyweight title contest.

The two-division titleholder last entered the ONE Circle in April. RDR captured his second ONE belt from the same individual he bested to capture middleweight gold.

The Dutch Knight is 14-0 as a pro mixed martial artist and is 5-0 under the ONE Championship banner specifically.

What are your thoughts on these recent heavyweight callouts from Reinier de Ridder?

By Dylan Bowker 2 mins ago