Penn State demonstrated this weekend why they are the number one team in NCAA wrestling. The Nittany Lions took home another Big Ten Conference title after putting six wrestlers in the finals and three wrestlers taking home gold. The Big Ten Conference is easily recognized as the toughest conference in NCAA wrestling. Cael Sanderson’s Nittany Lions captured the Big Ten championship with a 22.5 point margin over Tom Brands’ Iowa Hawkeyes.

Penn State put six wrestlers in the finals. Nico Megaludis at 125, Jimmy Gulibon at 141, 149-pounder Zain Retherford, Jason Nolf at 157, Bo Nickal at 174, and Morgan McIntosh at 197. Iowa placed four wrestlers in the finals, Cory Clark at 133, Brandon Sorenson at 149, Sammy Brooks at 184, and Nathan Burak at 197. Ohio State and Illinois each sent three wrestlers to the finals and Michigan, Nebraska, Rutgers, and Wisconsin each placed a single wrestler in the finals.

Seven of the ten bouts in the finals were won by three or less points, and three of which were decided in overtime. Returning national champion Tomasello needed overtime and a takedown to defeat the three-time all-American of Penn State. Clark of Iowa won a tight overtime bout with a 2-1 victory. 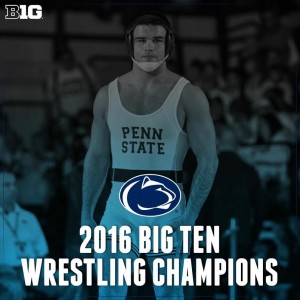 The match of the night honors would have to be awarded to Illinois returning national champion and Penn State’s freshman. Isaiah Martinez won a 4-3 UTB (Ultimate Tie Breaker) thriller against the man who ended his winning streak, Jason Nolf. Earlier in the season during PSU and Illinois dual-meet, Nolf caught Martinez on his back ending his 54-match win streak and undefeated career. Martinez avenged his loss after winning another thriller to capture his second straight Big Ten title.

At 165, cousins Isaac Jordan of Wisconsin and Bo Jordan of Ohio State met again in the Big Ten Championships finals for the second year in a row. Last year Isaac Jordan won 3-2, due to a riding point. This year Isaac Jordan once again defeated his cousin with another close score of 3-1. Both Jordan’s are Redshirt sophomores and wrestled together in high school at St. Paris Graham in Ohio. Isaac’s father Jim Jordan was a four-time OSHAA champion with a record of 150-1 in high school before becoming a two-time NCAA national champion at Wisconsin and holds the school record for wins with 156. Jim Jordan is also a congressman of Ohio since 2007. Bo’s father, Jeff, is the head wrestling coach at St. Paris Graham high school and a two-time NCAA all-American.

Zain Retherford of Penn State keeps his train steaming forward towards the NCAA championships in New York City after he defeated Iowa’s Brandon Sorenson 4-0 in the finals. Retherford is a returning all-American. The No. 1 ranked RS sophomore heads to Madison Square Garden with an overall record of 29-0 on the season. Retherford claimed his first Big Ten title, becoming the 22nd Penn Stater to win a Big Ten Crown.

The one of two Ohio State Buckeye champions, Kyle Snyder, defeated Michigan’s heavyweight Adam Coon 7-4 in the finals. Both wrestlers entered the match as returning national runner-ups. Snyder finished last season at 197, and Coon returning to heavyweight. Although Snyder’s record doesn’t represent the amount of experience he has, the Buckeye has been competing on the senior freestyle circuit. After defeating the former Olympic gold medalist Jake Varner, Snyder went on to become the freestyle world champion.