If you haven’t heard by now, this Friday Conquest of the Cage, a mixed martial arts competition in Spokane, Washington will feature two preteen girls getting their United States debut.

You read that right. Two twelve year old girls, one the daughter of a professional MMA fighter, will square off to test their skills. If that statement concerns you, this article might help clear some misconceptions about the bout, the organization and promoters involved. In what has to be an unprecedented match, is this feature a gimmick to sell tickets or could it be the first of many conversations regarding youth MMA? Ahead of the fight I talked with SikJitsu owner, and owner of Excite Fight Entertainment, Rick Little to make sense of what is about to take place.

But there is a lot to digest in this, so let’s start at the beginning. Cindy Dandois, a professional MMA fighter out of Belgium is the mother of Lola Flower Papadatos, one of the twelve year old girls competing. Papadatos has had previous bouts in MMA outside of the U.S. Her opponent, Darina Glassburn, is said to have been training in the sport since she was three years old. So how did this concept come to be?

“This concept came up through Cindy,” Little stated.

So… just fought yesterday, but still totally healthy so I will be fighting Bethany Christensen in two weeks at Conquest of the Cage in Washington… also my daughter Lola will get to action at the same card! Don’t miss it! 🔥🔥🔥 pic.twitter.com/kaF86cgkgi

“She just loves coming here to Washington state … She wanted to be here and her dream was to have her daughter compete in anything in the states. And she’s always asking me if I have anything for her daughter and I do not look because I do not want to see it … but I had one of my best friends who owns a gym start to pester me to find something for his girl. And he kept bugging me over time. And it literally took me six months to put it together in my brain,” Little continued.

Several times throughout the interview Little was asked about possible backlash, community views and what other parents might be saying. Some may look at this and assume this fight is to help sell tickets to the event. Little dismissed the idea and even added his thoughts on the match.

“It’s not designed to be spectacle … I’m not doing this to make money,” Little added.

If you ask Little, he had his own hesitations even piecing this fight together. After all, he is an MMA coach whose son competes and that idea wasn’t enough to convince him on it’s own.

“I almost feel guilty that I, myself, even have hesitation because I sit there and argue with everybody, ‘no our sport actually has a better safety record than this sport and that sport,'” Little claimed.

“And then, all of a sudden, it gets put in my face to put two 12 year olds together and I’m like, ‘Oh wait, no, that’s dangerous’ … I’m contradicting myself even there,” he continued.

So how does a match like this align with current MMA?

Several days ago, UFC President Dana White fielded a question from a reporter regarding a youth UFC program, to which White quickly dismissed. Whether this particular match fueled that question is not the important part (albeit post hoc ergo propter hoc doesn’t apply here). But this could be the start of something larger. What if this contest is the start of such a program or organization? It is important to note that as far as the Washington State Department of Licensing is concerned both athletes do meet the minimum age of competition should they have overseen such a fight card. Regardless this fight will take place at Northern Quest Casino, an Indian Casino located in Spokane.

I spoke with Christine Anthony of the Washington State Licensing Dep. and while she was aware of the match, she did acknowledge the rising popularity of the sport and how these girls fit into the parameters of any youth competition in the state.

When asked about the rules and regulations of this match Little spoke of how he views this fight taking place.

“Here comes a secret: I’m going to put as much stuff on them as I can,” Little assured.

From the sounds of it, the owner of Excite Fight Entertainment still seemed resilient to booking this match. After all, as a parent of a fighter, Little wouldn’t even let his son fight at this age. You could feel the frustration from Little of appeasing friends and colleagues while also battling with a moral dilemma regarding the age of these girls. At the end of the day, it appears to be the fighters and parents of the fighters pushing for this.

As the fight inches closer, the issue still appears to be whether these two are too young for such a sport.

If you’ve gotten this far, it’s a fair assumption that the sport of MMA is a passion of yours. It is of mine. The sport has spent nearly a quarter of a century defending the safety and discipline required. In the interest of full disclosure, I am not a fighter. I am not a parent. This is where the morality and age and parenting comes into question. Interestingly enough, a poll MyMMANews did last week questioned “should children be able to compete in mixed martial arts? No knees or elbows to the face, just punching, kicking, leg locks, etc. An overwhelming 71% of viewers agreed that children should be able to compete. 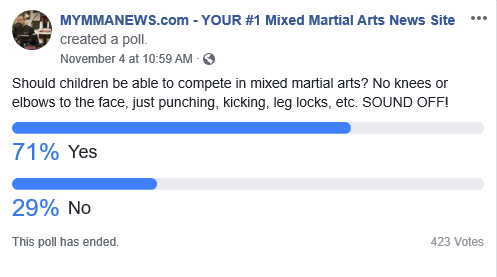 If we break this down from a youth sports aspect, we have youth BJJ classes and competitions. We have karate tournaments. We have youth boxing. Turn on Saturday boxing sometime and listen to the commentators praise a fighter for using youth boxing as a way to keep him/her off the streets.

Kids are also starting wrestling at a younger age. In a recent news story from FOX 6 out of Milwaukee, Wisc. “Girls wrestling is 1 of the fastest growing sports in the Midwest.”

So what, exactly, is so eye-popping about this particular story? Why is this where we draw a line in the sand?

“The whole cage gets people,” he continued.

In our interview, Little even alluded to the negative reaction coming from people based solely against MMA in general, not just youth MMA. He also believes that while he does have his reservations, the responsibility lies with the parents.

“These are friends of mine,” Little stated.

“I would just be judging the credibility of people that I respect. They want this. They know what they are doing. They can do it. Here is a good example: my kid wanted to compete when he was 13-14. I didn’t let him. I couldn’t comprehend it. So I mean it is weird because I didn’t let him go until he was 19. And it was still nerve wrecking for me,” the finished.

With the kids in their final preparations for the fight, could this jumpstart the conversation of youth MMA the same way we have youth football, gymnastics, wrestling, etc.? The answer is still not clear.

This article was written pending any comments from the parents of the fighters. It will be updated with any comments in the near future.

LISTEN TO RICK LITTLE BELOW: 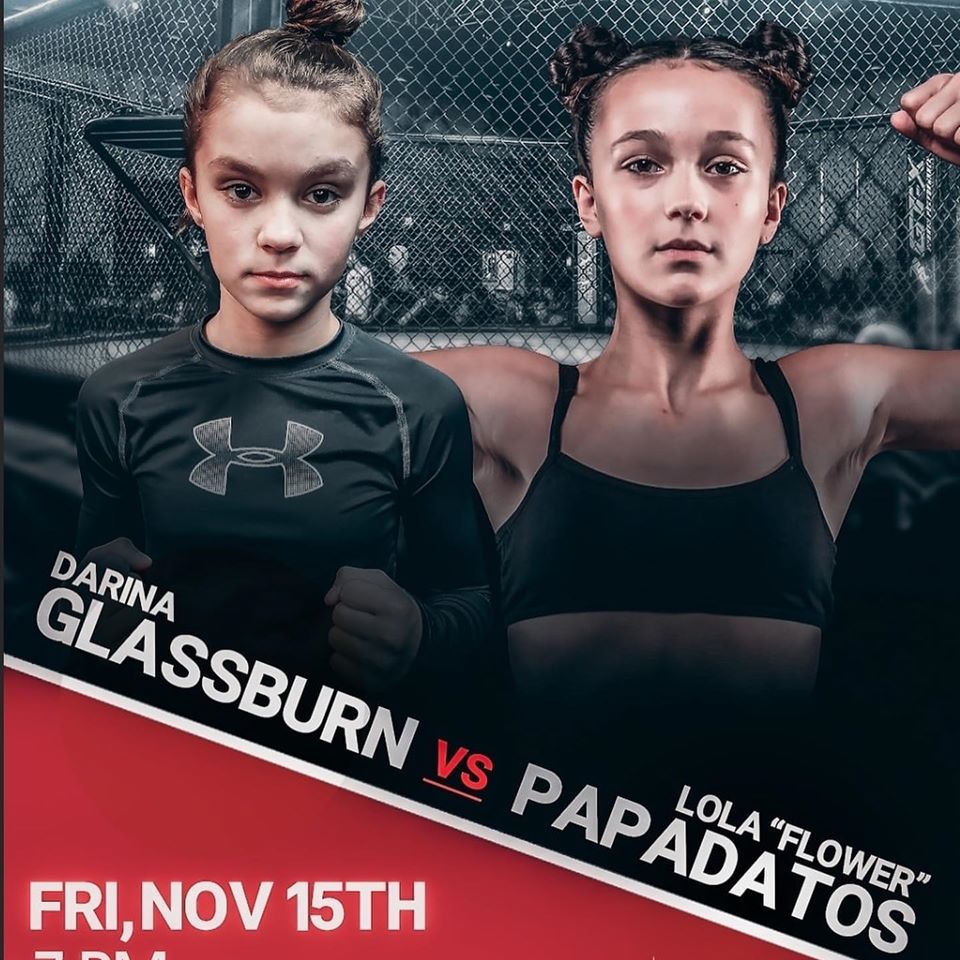 By Adam Crist 22 mins ago