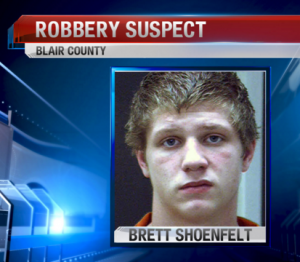 Pennsylvania State Police arrested Brett “Showtime” Shoenfelt, 26 after he allegedly assaulted a woman and stole her phone.  They say he was following a woman too closely in his vehicle, trying to force her off the road. Shoenfelt then allegedly smashed out her car window, grabbed the victim by the neck and assaulted her. Police say he then stole her cell phone and fled the scene.

The biggest stage that “Showtime” performed on was a World Series of Fighting card at the Sands Casino in Bethlehem, PA.  He lost that fight to Matt Secor via rear-naked choke.

Shoenfelt’s last fight was more than a year ago for GOTC, a split decision win over Andrew Osbourne.