Copeland returns to the Decagon for the first time in over 13-months to face longtime MMA fixture Kyle in what should be a heavyweight slugfest. Copeland went the distance with WSOF champion Blagoy Ivanov in June 2016 and received rave reviews for his bloody 25-minute skirmish. “Cuddly Bear” will look to get back in the win column and set himself up for the Professional Fighters League 2018 season.

Rosholt kicked off his MMA campaign with 14 wins in 16 starts but is in the midst of the first losing streak of his career after dropping two straight. The three-time NCAA Division I All-American wrestler will look to right his ship when he meets Rossborough in yet another heavyweight battle.

Firmino looked to be on his way to a stunning upset over Gaethje on the WSOF’s star-studded New Year’s Eve event but, despite being ahead on the cards, he was not able to answer the bell for the fourth round and his dream of becoming champion was put on hold. He’ll have an opportunity to revive his championship hopes when he takes on local MMA vet Eddy Ellis in a scrap that could help position him for the 2018 League tournament.

The eight-fight preliminary card will be streamed live worldwide on MyMMANews.com, ProfessionalFightersLeague.com, Facebook Live, via the FITE TV app and on the Kiswe Mobile App beginning at 6:00 p.m. ET.

At 16-0, Harrison has distinguished himself as one of the true fighters to watch in 2017. His 114-second dismantling of Bruce Boyington at WSOFNYC on New Year’s Eve earned him a title shot against highly regarded Lance Palmer this past March. Harrison earned a unanimous decision victory and the WSOF featherweight belt when he bested Palmer. He’ll now square off with Rodriguez with the top featherweight seed when Professional Fighters League inaugural season kicks off in January 2018.

Two distinguished welterweight veterans of mixed martial arts will join Harrison on the packed slate. Yushin Okami, a veteran of 43 MMA fights, will face a very tough Andre Lobato in the co-main event while Jake Shields will take on Danny Davis Jr. in hopes of establishing himself as a top contender in the 170-pound division heading into 2018 League play. Undefeated prospect Shamil Gamzatov and Rex Harris will round out the live broadcast with a middleweight affair that is slated to start at 9:00 p.m. ET.

“We are excited to be back in Everett,” said Carlos Silva, President of Event Productions and Business Operations. “I can’t wait to introduce the Professional Fight League to all the MMA fans in the Pacific Northwest as we continue to build towards the game-changing 2018 launch of our $10 million league format.” 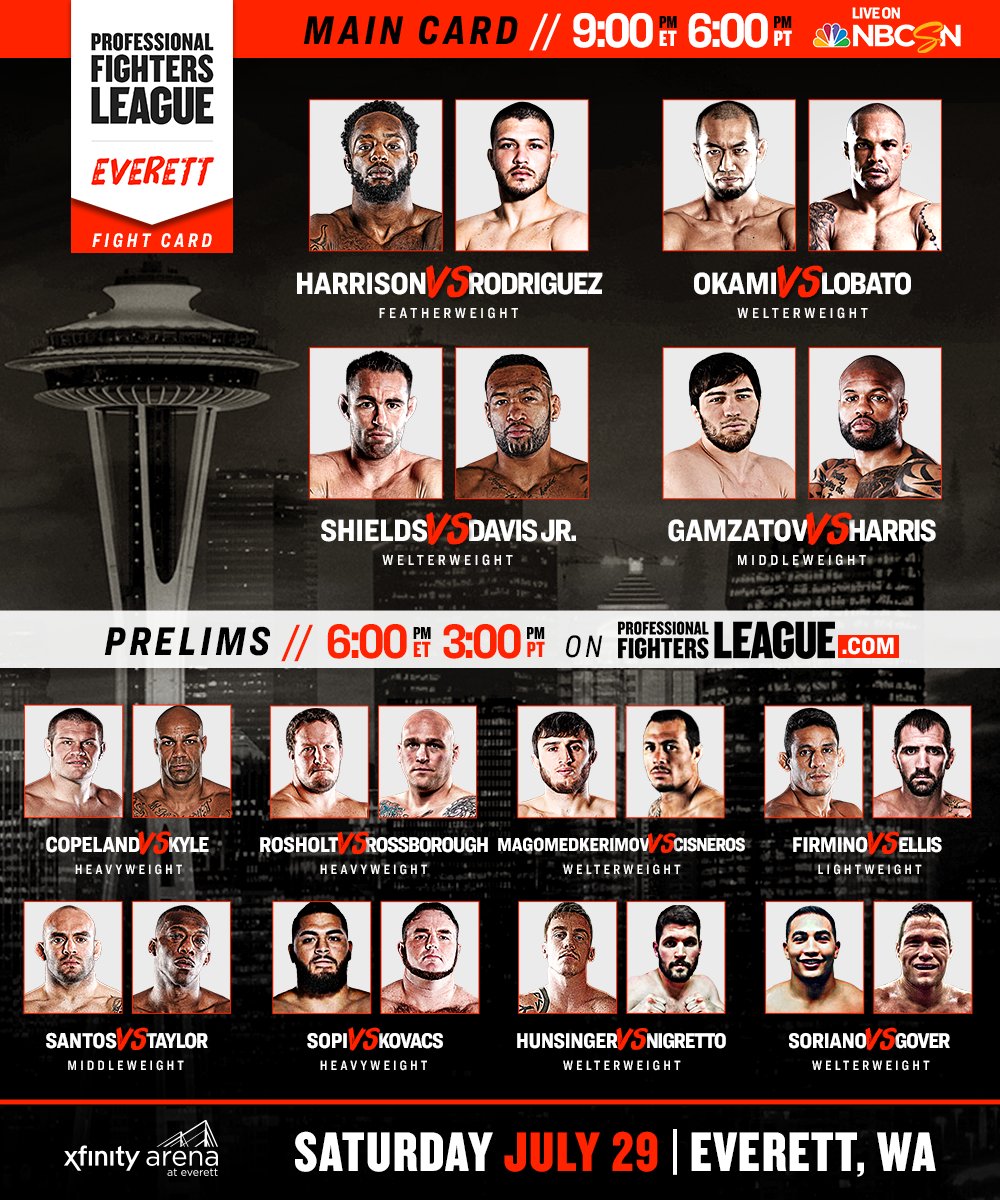