On the regional Mixed Martial Arts scene, depending on what state you are in, finding quality fights to watch live and in person is not always an easy task. Luckily for residents of Wisconsin, local fight fans will only need to look as far as Milwaukee to catch some great matchups this weekend, courtesy of Pure FC.

Live from RWB Milwaukee, Pure Fighting Championships is set to produce their 21st event since the promotion’s inception, and their first event of 2022. While most of the bouts on the card are between up-and-coming ammeter competitors, the evening does include an intriguing professional main event contest featuring two high level grappling experts.

Amateur Featured Fight of the Night

In the event’s featured fight, fans will see two undefeated welterweight contenders square off for the number one spot on Pure FC’s 170-pound amateur ladder. Milwaukee local Anthony Cain (3-0), training out of Pure Vida BJJ & MMA, added a second TKO victory to his record in his previous fight, and will be looking to add a third as he takes this next step towards a title shot. Entering the cage to face Cain will be Jeremy Landowski (2-0), the product of Unified Martial Arts in Wisconsin. Landowski has displayed skill sets in both grappling and striking in his short time with Pure FC, winning his amateur debut with a second round TKO. Following that was his latest match, which he finished after only 17 seconds with a well executed guillotine choke. Anything could happen in this bout between two up and comers. This fight also serves as an excellent lead into the next, given the shared weight class.

The Co-Main event of the evening will display a battle between two young, hungry amateur fighters. Both competitors are looking to secure Pure FC’s vacant welterweight title. Herbert Rogers-Williams (5-2) has had a slightly up and down career since his MMA debut, and lost his last fight in a unanimous decision. Preceding this loss, Williams was on a healthy three-fight win streak and will be looking to bounce back to his winning ways versus Matt Leonard. Making his first appearance in the Pure FC cage, Leonard enters his fifth bout undefeated. Additionally, all of his fights have come by way of stoppage (3 TKO, 1 Submission). Nicknamed “Jiu-Jitsu Jesus” the grappling messiah’s game plan should be obvious, gain the position, achieve the submission. Whoever comes out on top in this 170-pound championship match, will schedule their first title defense against the winner of the evening’s featured bout.

Although the card consists mainly of amateur matchups, the crowd will look forward to the event culminating with a professional heavyweight main event. Fighting out of Sacramento at Urijah Faber’s Team Alpha Male facility, 33-year-old Kacey “Hand Grenade” Sanders is still on the hunt for his first professional win. With a wealth of experience in the Amateur ranks and a strong submission grappling background, Sanders is highly motivated to break this losing skid he has found himself amid. Set to take center stage versus Sanders will be Nick Klein, fellow team member of Anthony Cain at Pure Vida BJJ & MMA. In addition to finishing his amateur career at 7 wins and only 1 loss, Klein achieved victory in his first professional showing versus Dan Almario, at Pure FC 19 back in June. His professional debut was also his first bout in the heavyweight division, so there is speculated to be a significant size difference, potentially giving Sanders an advantage. Both fighters possess heavy power, and both have reached high levels of expertise in grappling. Regardless of if this fight stays on the feet or goes to the ground, the crowd in Milwaukee will be in for a show!

The stage is set for a great fight night in Wisconsin! With an excellent lineup of amateur matches, followed by a can’t miss professional heavyweight battle. See below for start time information and how to watch. 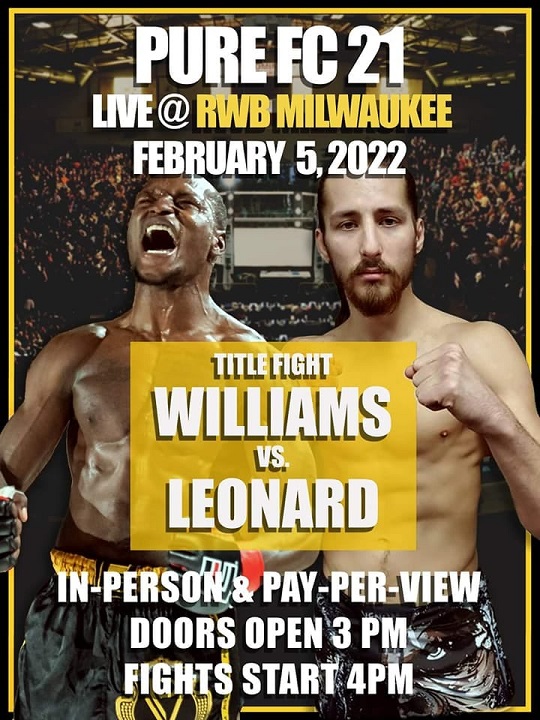 Grab tickets from www.purefightingchampionships.com or catch the action via PPV

Keep an eye on the EVENTS section of MyMMANews.com for more updates from the world of regional MMA.

By Chinyere Okafor 23 hours ago