Reena Norville became a champion one year ago. Norville fought Maraya Miller in Spar Star Promotions at SSP Fight Night 45, where she earned an unanimous decision win and took home two belts that night. She said in her post-fight interview immediately after the fight that the plan was to go for the next belt, but that plan would actually be put on hold for a bit.

Norville wanted to take some time off in order to give her body a much needed rest because she completed several fight camps ahead of the Miller fight. Once she felt ready to resume her normal training, the world was rocked by the coronavirus pandemic and shut down, so Norville would see her return to action pushed back further.

“It’s been exactly a year. Today was when I won the belt a year ago,” Norville told MyMMANews. “After I got that belt, I was taking a little bit of time off because I had done so many fight camps that had fallen through. And so, my body was just a little bit wrecked. Then, I took a couple of months off and as I was coming back, COVID hit so everybody was kind of messed up with all the COVID stuff. Everyone was in limbo on how to train, where to train and who to train with and so we basically took a step back. I was still training — running for the most part and doing some training here and there. Once things started opening up again, I hit it hard and I started back training super hard. Now, the state is still closed for fighting, but we decided to venture out into looking at other avenues of where I could fight, so now I’m getting ready for a LFA fight.”

Figuring out her return during a time like this was difficult, but Norville found a way. And it is what led her to make the decision to transition from amateur to professional fighter this year. She recently signed a one-fight deal with Legacy Fighting Alliance and will be making her professional and promotional debut on a soon-to-be announced card at the end of October.

This was not her first brush with LFA as opportunities had become available to compete under the banner previously, but with the uncertainty of cards staying together right now, Norville was unable to get a fight until now. She details what it was like for her and her manager to find, and finally sign onto, a fight.

“It was basically through my manager,” said Norville. “It was a lot of, ‘Hey. We have a potential card!’ and I was like, ‘Okay cool! Let’s go!’ and then it’s canceled. Everything just kept getting canceled because of COVID and I get it. It’s a weird time in the world, but it’s one of those things where things kept popping up and then they would just crumble. Finally, my manager found an LFA card that needed more fighters and so I was like, ‘Hell yeah! Let’s go.’”

As she prepares for her the first professional fight of her career, Norville believes the timing could not be more perfect. She has been thinking about taking this next step for some time, and she is confident in doing so now because her team out of 10th Planet Jiu Jitsu sees and agrees she is ready.

“I feel great! I feel confident. I am very confident in my skills and my knowledge of the sport, especially with the people I train with. My coaches are top notch. They are the top people and trainers in the fight world, so if they say I’m ready and I can kill it, then I completely one hundred percent trust in them and I believe it.”

**FIGHT ANNOUNCEMENT** I have received my FIRST PROFESSIONAL FIGHT contract, I’m excited and proud to represent @10thplanetsandiego when I fight for @lfafighting on @ufcfightpass !!!! I want to thank my coaches, training partners, my manager, and especially my husband @war_rhino for helping me live my dream and showcase my skills. I’ll release more information as soon as I can 🌵👊🏽 #lfafighting #wmma #meangirlsmma #alwaysupgrade #mma #jiujitsu #10thplanetfreaks #10thplanetsandiego #aztecaboxingclub #boxing #jiujitsu #muaythai #wrestling #kickboxing #havefistswilltravel #letsgo #timetoshine #letsgochamp #meanbeanreen

One of the main training partners to Norville is Bellator MMA lightweight Shane Krutchen, who is also her husband. The duo work together every single day and Norville credits him for helping shape her evolving game in mixed martial arts.

In essence, Krutchen is what Norville likes to call her secret weapon.

“He helps me with so much of his strengths in the game and he helps me with old school techniques and tricks that they don’t even teach anymore these days,” said Norville. “He has these little tips and tricks, especially since he is also tall and lanky for his weight class, so he will give me a little bit more insight on what works for his body type when I’m fighting an opponent like that. It’s really nice too because if we have some free time, then we will get up and go to the gym and drill some things. You always have that little partner with you that will always be willing to drill this or that. I think it’s helped my game excel at a faster rate.”

Speaking of her game, Norville sees herself as a very well-rounded fighter despite being relatively new in the sport. She makes sure not to boast in a manner that gives off the impression she is perfect because she knows there is no such thing in fighting. She says everyone, including herself, has holes in their game, but she has continuously worked to get better at fixing them.

Her record may reflect a different story though, as Norville is currently undefeated with four wins, three of which have come by knockout inside of two rounds. She is proud of this record and knows she has a ways to go, but she is on the right track thus far.

“I am new, but at the same time, the people that I’ve been sparring with and training with are absolute killers and they are in the top promotions in the world. It’s not like I’m going in and sparring with these people that just came in off the streets, one or two classes in, you know? It is very tough competition and it is very technical. As far as what I see in the future, I think that — you know I am older. But, I don’t have the miles on my body that some of the other women my age in the MMA world have. Therefore, I think I can last longer. My mentality and my experience in life really helps. I feel like I might have a one-up on them because I’m more poised and have a little bit more wisdom. Things don’t necessarily get to me like they used to when I was in my 20s, where I would have a lot of self-doubt. Now, it’s to the point where I am one hundred percent confident in everything that I have. I think I can have a very successful career in the MMA world for years to come.”

A long-term career goal Norville hopes to accomplish is joining the ranks of the strawweight division in the UFC. A Saturday night with a scheduled strawweight fight is awesome for Norville, who cannot help but visualize herself in the cage opposite of one of these women because it will certainly happen one day.

“I feel like that should be a goal for every fighter’s foreseeable future, but there are stepping stones,” said Norville. “I can’t just say, ‘I’m going pro. Hey, UFC. Hit me up.’ It doesn’t work like that. I get that and I understand that. I know that, yes, there are all these other promotions that are absolutely great and that I can perform under so that I can get to the UFC. Yes, that would be the goal I think for anybody. As far as if that is what I’m shooting for? Is that what is in the back of my mind anytime I step into the cage? No. It’s basically win and then get the next step.

“Obviously, there are a lot of stepping stones that I have to cross in order to get to that level, but I absolutely can do it. There are so many times where I’m watching the fights and I’m thinking, ‘Yeah, I can take that girl’ or ‘Maybe I wouldn’t win, but I can stand and bang with her all three rounds or whatever’. It’s one of those things that yeah, every time I’m watching a fight, I’m visualizing myself in the cage with that person as far as my weight class is concerned. I feel like if I didn’t truly love the sport, then I wouldn’t be doing that.” 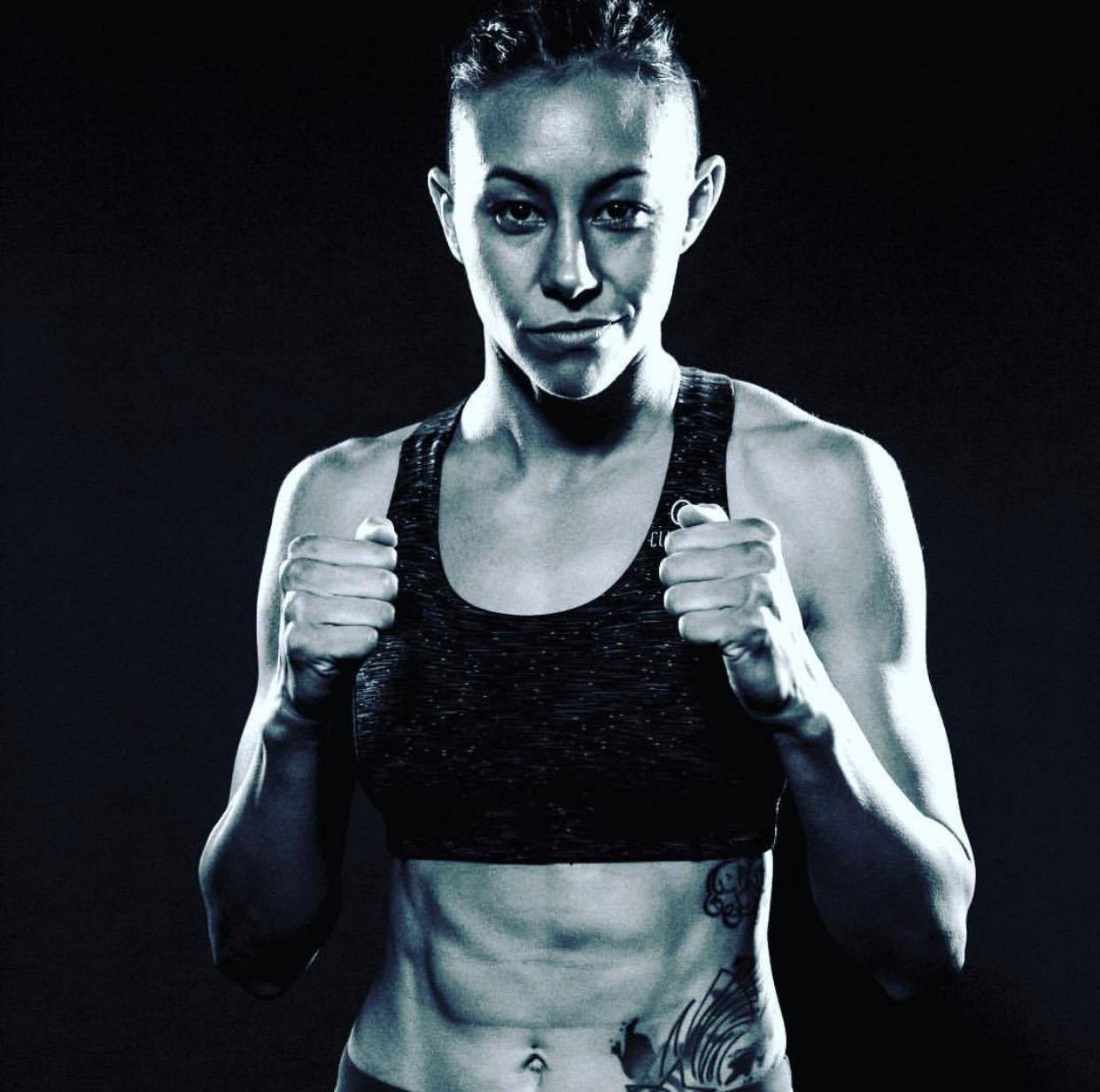