Khamzat Chimaev is the UFC’s newest rising star, and he’s been rising quicker than anyone in the sports history. He’s gone 3-0 inside the octagon in just 66 days, out-landing his opponents 196-2 in total strikes, securing a finish in each outing.

The level of competition he’s faced has been ridiculed by some, considering most don’t know who they are, at least his first two UFC opponents. However, they’re still good fighters, and he ran right through them. 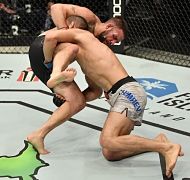 Chimaev first made his UFC debut with a 6-0 record opposite the 22-9 (1 NC) John Phillips, who isn’t the most skilled middleweight on the planet, but he is a very dangerous opponent for anyone, and in a weight class above.

Of Phillips’ 22 wins, 20 come via knockout. Chimaev wasted no time getting the fight to the floor, as he mauled Phillips for the entirety of round one, and the second round as well until the fight was stopped via submission (D’Arce choke) at 1:07 of round two.

The longest fight Chimaev has had was in his fight prior, where he submitted (D’Arce choke) his opponent just three seconds later. His next fight came just ten days later against the 10-2-1 rising UK prospect Rhys McKee.

This fight was in his natural weight class of 170 lbs. Though no one knew who McKee was coming in, considering he was making his promotional debut, but that doesn’t mean he isn’t a very skilled athlete. Everyone we know of and enjoy watching fight, there’s a first time we saw all of them. 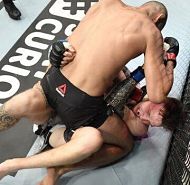 McKee is one of, if not the hottest prospect out of the UK right now, the UFC would have done a short promo on how he may be the next big thing if he wasn’t fighting Chimaev. He was fighting Chimaev however, so he got overlooked.

Chimaev ran right through McKee as well, finishing him via TKO in at 3:09 of round one. It would be almost two months before we saw Chimaev fight again.

He was initially supposed to fight at UFC 252, but was unable to get a visa to come to the US, and was forced to wait until UFC Fight Night 178 about five weeks later.

The bout came against the 31-13 Gerald Meerschaert at 185 lbs. This was thought of to be his first real test, but it turned out to be his easiest fight to date. Though he was a heavy favorite coming in, no one expected it to go the way it did. 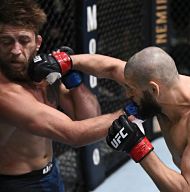 Chimaev only threw six total strikes, four of which landed, three of which were kicks. He one-punch KO’d Meerschaert with a beautiful straight right just 17 seconds into the first round.

For someone who has less than ten fights to have a performance like that against someone with over 40 fights in a weight class above, it’s quite remarkable.

Meerschaert is a dangerous talent in his own right, he has wicked BJJ and good striking, being a BJJ black belt coming out of Roufusport.

The issue with this, now everyone wants him to be thrown right into the top five. There’s been talk of him fighting the No. 3 ranked Leon Edwards, as well as the No. 5 ranked Stephen Thompson, both at welterweight of course.

He may be ready, it’s hard to tell, though it’s hard to say he isn’t. But, with the way his first three fights in the UFC went, he probably is already a top ten talent, at both welterweight and middleweight. Why push him so fast though? 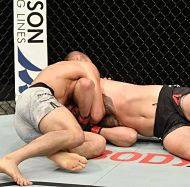 If Chimaev fights a ranked opponent next, let alone a top five opponent, he’s going to compete far less often. Part of the mystique of Chimaev is that he’ll jump between weight divisions and fight as often as his promotion lets him.

If he fights a ranked opponent and wins, he’ll only fight two or three times a year, like most professional fighters.

Jumping from 170 lbs to 185 lbs will help with that, but still, talents that are ranked want a full training camp. They want to be able to put everything into it, to not feel unprepared and lose their spot in the rankings.

Also, look at the top 15 of any weight class, half of them are always booked, a couple are injured, it will not be favorable with someone like Chimaev. Instead, the UFC should give him someone just outside the top 15, or maybe someone at the very bottom of the top 15. 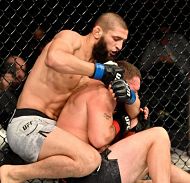 Sure, he’ll be the favorite in all of those fights and most likely win all of them, but that’s how you build talents.

He has the chance to build a real resume, have a long undefeated streak, have multiple fights a year, and even more hype than he has now should he win all those fights.

We’ve seen what happens when fighters are thrown straight to the wolves. Some make it, some don’t, but Chimaev’s still only 26-years-old, and he’s only had nine professional fights, he has time to shape into the best mixed martial artist in the world.

Chimaev didn’t even start fighting until September of 2017, where he debuted as an amateur, going 3-0 with three finishes before making his professional debut in May of 2018.

It would be super unfortunate to see Chimaev just skip the line. Yes they’d be great fights, but it needs to come in due time. That’s something he has, time, he’ll continue growing regardless, but chances are he’ll grow more if he gets to compete more.

At some point he well only be able to fight two or three times a year, that’s a given, no matter what, that’s going to happen. 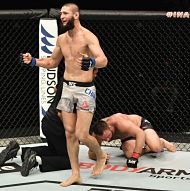 We know he’ll make it to the top of the division, or both divisions, but it’d be much better to see him work his way up and get as many great performances out of him as possible before we can’t see him fight x-amount of times a year anymore.

There was talk about Chimaev being booked to face Demian Maia at UFC 254, even before his fight with Meerschaert.

Though he handily finished Meerschaert, it appears the UFC is looking in a different direction for what’s next for him.

That’s a good thing. Even after his last performance, realizing Maia may be a good match up for him, it’s a good thing to look elsewhere for his next opponent. Maia has one fight left before he retires, we don’t want him to go out on a loss, and he’s ranked at No. 6, the same thing as mentioned above happens should Chimaev defeat him.

The No. 14 ranked welterweight Anthony Pettis would be a good match up. Pettis is the former WEC and UFC Lightweight Champion, and he’s equally as dangerous on the mat as he is on the feet. That’d be a great test for Chimaev.

The No. 13 ranked Nate Diaz would also be a good match up. The boxing and grappling Diaz possesses, those are the same strengths Chimaev has, along with his wrestling. That probably won’t happen, considering neither Diaz is willing to fight opponents they haven’t heard of at this point. Chances are, he hasn’t heard of Chimaev. 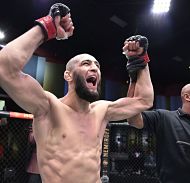 Or he could go back up to middleweight and face the winner of Ian Heinisch and Brendan Allen.

Heinisch is ranked at No. 15, and should Allen defeat him, he’ll most likely be No. 15 himself. The No. 13 ranked Omari Akhmedov would also make for a great match up. They’re both outstanding wrestlers with good striking.

Those are just the lower ranked welterweights and middleweights, there are still numerous unranked talents that are incredibly skilled and dangerous that’d make great fights for him.

Perhaps the best fight to schedule him in right now is a bout with the most recent welterweight talent to call him out, Alex Oliveira. This would be a perfect fight for Chimaev right now. Oliveira’s ranked somewhere between 16 and 25 at welterweight, and he’s a very well rounded, dangerous opponent.

Oliveira went to MMAJunkie to state the following: “I’ll take the fight no one else wants. Chimaev, I’m ready for a fight at welterweight right now. I see you picking and choosing opponents. I’m right here.”

The moral of this, we all know he’s going to make it to the top, just let him do it the right way.

Who would you like to see Khamzat Chimaev face next?