We have an incredible co-main event to look forward to this weekend, as the No. 14 ranked UFC featherweight Edson Barboza takes on Makwan Amirkhani in a three-round featherweight bout.

Barboza has only competed at 145 lbs a single time, while Amirkhani’s entire career, aside from one fight has been at 145 lbs.

Amirkhani has fought once at bantamweight, while Barboza’s first 28 fights were contested at lightweight. Barboza has also had a few opponents lined up for this card.

First, he was scheduled against Jeremy Stephens, but Stephens was forced out of the bout and replaced by Sodiq Yusuff. However, Yusuff pulled out about two weeks ago and was replaced by Makwan Amirkhani.

It’s too bad we aren’t seeing Barboza fight Stephens, or Yusuff, but this Amirkhani match up is also very compelling. Stephens is a ruthless striker, kind of like a featherweight version of Robbie Lawler, but bigger for his division.

As most of us know, Barboza got his start fighting in professional Muay Thai, where he holds a 25-3 record with 22 knockouts. He also has 17 first-round finishes, and 17 titles won in the art. Once coming to mixed martial arts, he quickly went 6-0 inside of 14 months before joining the UFC. 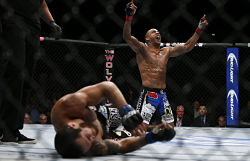 Once joining the UFC roster, ‘Junior’ went 4-0 with two knockouts, one victory of which was over 23-1 professional kickboxer Anthony Njokuani, before suffering his first defeat to former three-time WEC Lightweight Champion Jamie Varner.

Right before his defeat to Varner is when that epic spinning wheel kick KO of Terry Etim happened. The fight that really introduced Barboza into the fight community. 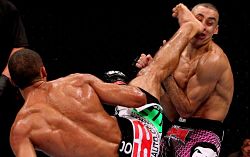 He’d only lost to the very best, and he’d beaten some of the very best. He had two very convincing one-sided outings over multiple-time world champions in Pettis (WEC & UFC) and Melendez (Strikeforce).

However, Barboza has gone 1-5 in his last six coming into this fight, with his only victory coming via KO over Dan Hooker. That one win is incredibly impressive, Hooker’s as tough as they come, he’s the No. 4 lightweight in the world, and Barboza’s still the only opponent he’s had to finish him with strikes.

Though Barboza has lost his last three straight, his last two defeats come via split decision to Paul Felder in a rematch and Dan Ige in his featherweight debut, and most people believe he won both fights. Really, the Felder fight could’ve went either way, it was so close, and he certainly won the Ige fight. 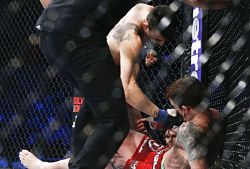 Amirkhani came to the UFC with a 10-2 record in early 2015, where he TKO’d Andy Ogle in just eight seconds of his debut.

This remains the only victory via knockout method on Amirkhani’s record, but it was the perfect way to make a promotional debut.

He’d then go 4-1 in his next five, losing a split decision to a real prodigy in Arnold Allen, and defeating the likes of Jason Knight (split decision) and former four-time Cage Warriors Lightweight Champion Chris Fishgold (anaconda choke).

The Allen fight was a tough night for him, the decision could’ve easily went his way, he and Allen both looked great that night. His Knight fight was very impressive, defeating a 20-4 prospect who’s now doing very well in BKFC, and he submitted a four-time world champion that also boasts a black belt in BJJ. 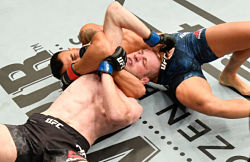 Amirkhani’s next fight came against Shane Burgos, who he looked incredible against early on, but all that wrestling made him tired, and he was TKO’d late in round three considering.

Next came his most recent fight, a bout against submission specialist Danny Henry, who he submitted (anaconda choke) at 3:15 of round one.

That brings us up-to-date on these two featherweight talents, but even knowing how they’ve done previous, this is a very tough match up to pick. They’re both so good at what they do, and they’re both very well rounded. 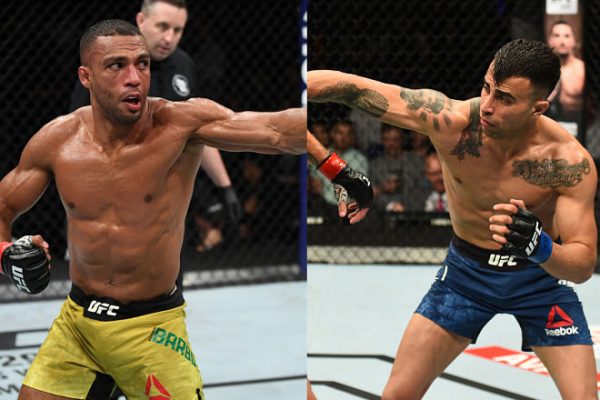 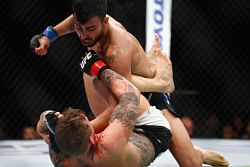 ‘Mr. Finland’ got his start in freestyle and Greco-Roman wrestling, each of which he started training at the age of four, having won numerous Iranian championships in both styles.

People often overlook Amirkhani as an elite grappler and wrestler because he doesn’t have a BJJ rank and he didn’t go to an NCAA Division I school for wrestling, but make no mistake, he’s about as solid as they come on the ground.

Amirkhani also took some time off from mixed martial arts between his fights with Jason Knight and Chris Fishgold in order to compete in amateur boxing, where he went 3-2 in just three months, both defeats coming via majority decision. 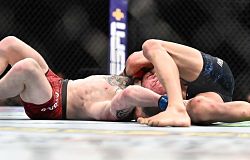 Amirkhani’s also had a year or more off a couple different times aside from that since he’s been with the UFC. If he could stay consistent with his appearances, there’s no doubt he’ll be a ranked fighter soon.

At 31-years-old, turning 32 next month, and the fact he doesn’t usually take much damage in his fights, this is the perfect time for Amirkhani to make a run.

Barboza is now 34-years-old, turning 35 in January, and it does appear that his best days are behind him. However, he did look good in three of his last four fights, the one where he didn’t, he fought Justin Gaethje, and the two losses prior to his last four outings were against Khabib Nurmagomedov and Kevin Lee.

Though Amirkhani has a real wealth grappling credentials, Barboza’s no slouch on the ground, and he has other credentials of his own as well. ‘Junior’ won a Brazilian National Submission Wrestling tournament, and also has black belts in both Muay Thai and Taekwondo. 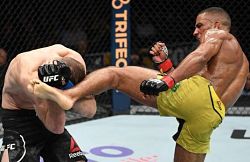 You see, not only is Barboza just a great striker, not only is he a dangerous striker, but he’s as well rounded of a striker as we’ll see in the sport. He has a better switch kick than anyone, he has better spinning back kicks and spinning wheel kicks than anyone.

His hooks to the head and body are vicious, then his leg kicks, we don’t even need to get into that.

We all know how ruthless his leg kicks are. This is something ‘Mr. Finland’ will definitely have to watch out for. Maybe he’ll be able to catch one of Barboza’s legs in order to secure a takedown, but ‘Junior’ pulls his leg back so quickly, it’ll be tough.

These two have a similar frame, with Barboza having the slight advantages, standing 5’11” with a 75” reach, while Amirkhani stands 5’10” with a 72” reach. If Barboza wins this fight, he’ll probably stay where he’s at in the rankings, but should Amirkhani defeat him, he should take Barboza’s No. 14 spot.

How do you see this epic featherweight co-main event clash going?