Next weekend at ONE Championship‘s 10-year-anniversary card, ONE: X, combat sports fans are in for a treat when Rodtang Jitmuangnon and Demetrious “Mighty Mouse” Johnson compete in a hybrid rules bout consisting of alternating rounds of MMA and Muay Thai.

Several month’s before ONE announced the signing of the contest, MyMMANews reporter Blaine Henry wrote about the possibility of such a clash, stating, “Demetrious Johnson and Rodtang are, or were depending on who is asked, the best in their respective sports. Mighty Mouse has the most title defenses in UFC history. Rodtang has over 300 fights professionally, is the ONE champion and has fought in the most prestigious of stadiums in Muay Thai, namely Lumpinee and Rajadamnern.

“Thai boxers and kickboxers routinely crossover into each other’s sports all the time. Here, we are simply getting to see Demetrious Johnson go to Muay Thai and Rodtang try out MMA at the same time, barring a quick finish by Rodtang in the first.”

The special rules contest will consist of four scheduled three-minute rounds.  The first and third rounds are slated to be contested under Muay Thai rules while rounds two and four will be evaluated under mixed martial arts regulations.  Fighters will also wear four-ounce gloves. 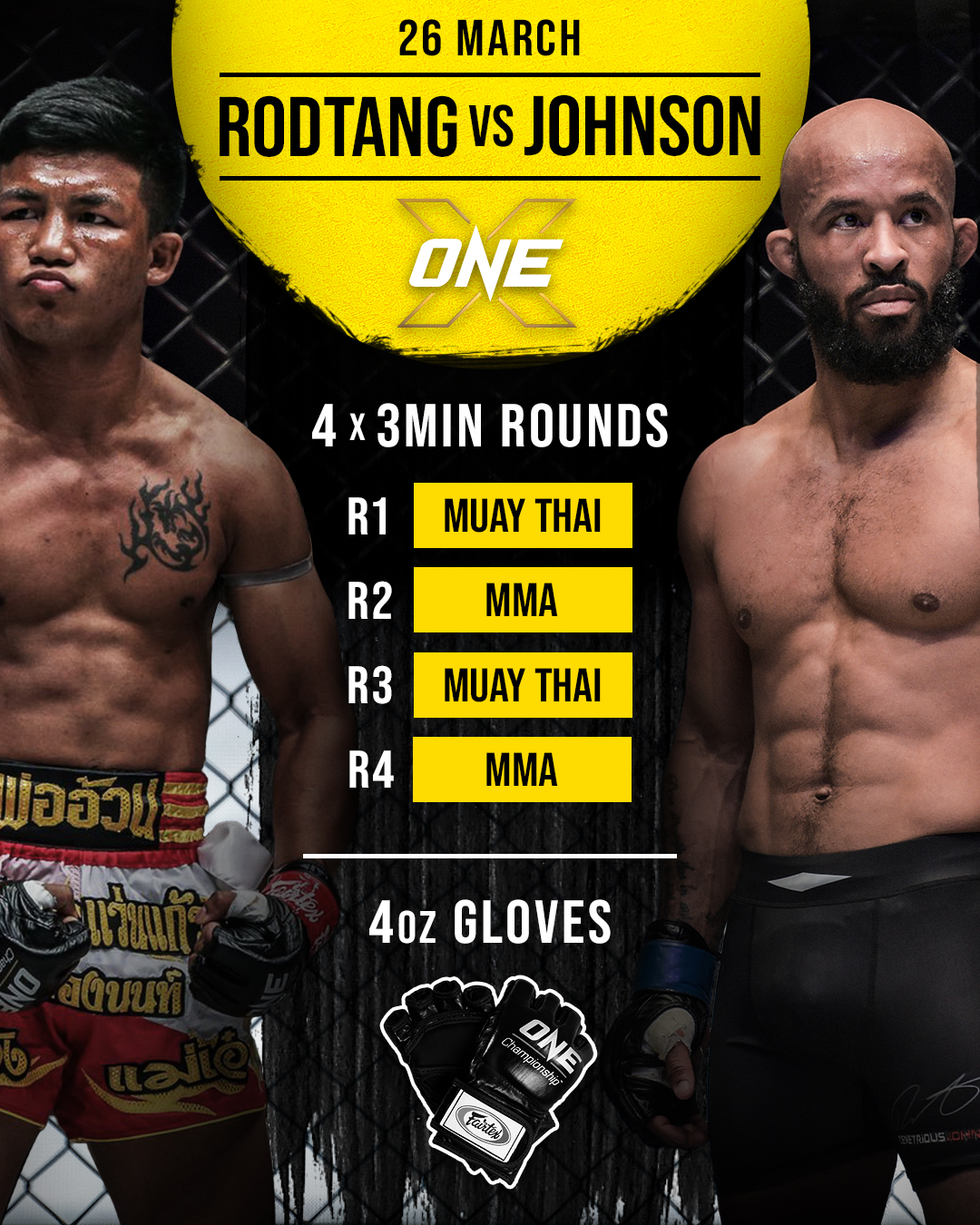 Now that the fight is actually booked for March 26 in Singapore, Rodtang was provided the opportunity to respond to Mighty Mouse’s comments that the famed Thai artist “did not stand a chance against him when it comes to wrestling.”

“I can’t answer that because I have no experience in this sport, really,” Rodtang said. “But what I can answer is I won’t give up easily. If you can get me on the ground, you have to beat me until I die or choke me to sleep, otherwise I will not give up. Anyway, if he thinks he can come close to me, I would not let him take me down easily. Let’s eat my punches first and he will know if he dares to come close.

“If he can survive my Muay Thai. He needs to submit me in round two, otherwise he will be out of luck. I thought I was going to beat him until he ran out of gas in the first round. So, he doesn’t have the strength left to hurt me in the second round.”

Johnson believes that he will outwrestle and submit Rodtang to have his hand raised victoriously, while the 24-year-old “Iron Man” from Thailand does not see the fight will go that way.

“You said you would submit me in the second round, huh? Why don’t you think that you might have a broken leg, a fractured rib, or a cut on your eyebrow in the first round? Or are you planning to keep running away from me in the first round. Don’t forget that you have to pass my Muay Thai in round one first.”

The bout order for ONE X: Grand Finale is as follows:

The bout order for ONE X: Part II is as follows:

The bout order for ONE X: Part I is as follows:

By James Colwell 12 hours ago