KSW bantamweight champion Sebastian Przybysz (8-2) will defend his title against top Brazilian prospect Bruno Santos (10-2) at KSW 64 on October 23 live around the world on www.KSWTV.com and the KSW App.

An exciting title fight will top the bill at KSW 64 as Polish fan favourite Sebastian Przybysz (8-2) makes the first defense of his KSW bantamweight title against Brazil’s Bruno Santos (10-2) on October 23 live from the Atlas Arena in Lodz, Poland, and available worldwide on www.KSWTV.com.

Przybysz realised his dream of becoming KSW champion earlier this year defeating the seemingly unstoppable Antun Racic at KSW 59. The 28-year-old, who joined the promotion in 2018, has risen in popularity due to his exciting fighting style and knockout finishes. Now on a four-fight win-streak, the champ is welcoming the challenge of Bruno Santos.

The Brazilian made his KSW debut last December immediately challenging for the title off the back of an impressive streak on the regional scene in Brazil. After a valiant effort, Santos came up short against then champion Antun Racic. The 22-year-old immediately bounced back with an impressive win over SBG fighter Pawel Politylo at KSW 62 a few months ago to earn his spot once again as title contender.

Co-billing KSW 64 will be the monstrous clash between five time world’s strongest man Mariusz Pudzianowski (15-7) and Sengalese wrestling legend Bombardier (2-0). Watch live around the world on www.KSWTV.com and the KSW App! 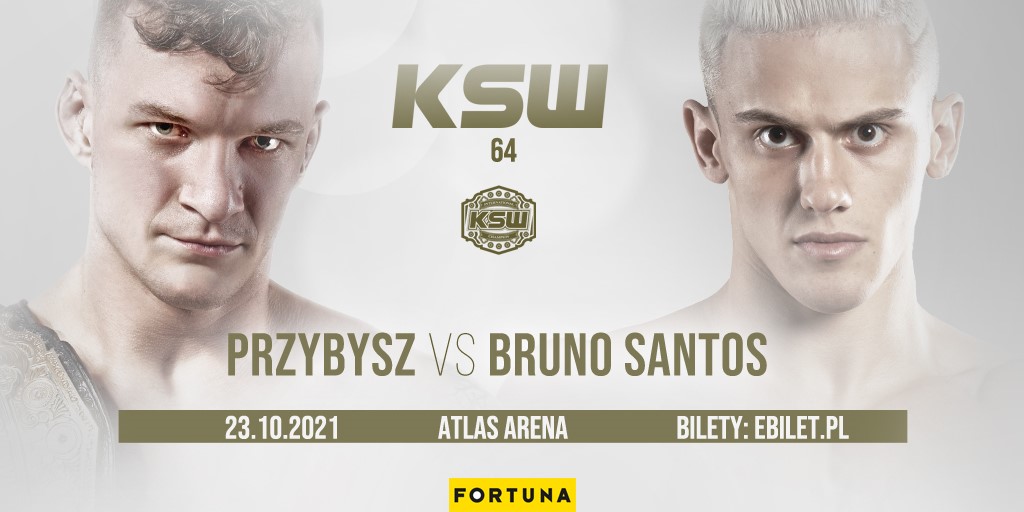