New details were revealed regarding the co-promotion between Bellator MMA and Oktagon Kickboxing. The partnership is set to take place on April 16, 2016, when the two combat sports promotions join forces at the Pala Alpitour in Torino, Italy. 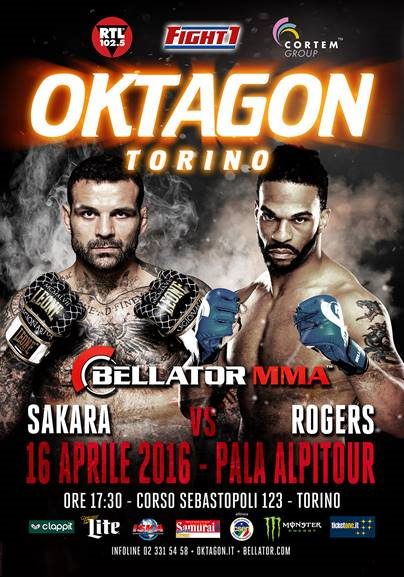 mune Di Torino this afternoon by several of the world-class fighters slated to take part in the highly anticipated event including Alessio Sakara and Brian Rogers who will face one another in a light heavyweight MMA match up. Also in attendance this afternoon was Dutch knockout machine Melvin Manhoef, who will be competing in a kickboxing match up, and mixed martial artists Danilo Belluardo of Milan and Anastasia Yankova of Russia.

Although they were not in attendance at today’s press conference, it was announced that one of MMA’s most promising young prospects, A.J. McKee will be fighting Belluardo, and kickboxing standouts Raymond Daniels and Kevin Ross will be competing as well on April 16.

The event will feature both Bellator MMA and Oktagon Kickboxing bouts, with the Bellator MMA portion airing in the United States on SPIKE. Exact broadcast information and fight card will be announced in the near future.

Bellator MMA President Scott Coker was unable to be in Italy for this announcement, but added: “We are beyond excited to be announcing the participation of these incredible athletes alongside Carlo Di Blasi. This is an incredible indication of the amazing show that we are putting together, and there is so much more to come!”

Oktagon Kickboxing President Carlo Di Blasi said: “When Scott Coker confirmed me of the coming of Bellator MMA in the Olympic city of Turin with Oktagon kickboxing I immediately thought this is actually the biggest hit ever in European history of fighting sport.

“The expectations are really high and I am sure the spectators at venue and on TV will keep this enthusiasm during the whole show.”

On April 16, Italy’s own Alessio Sakara will be making his first appearance for Bellator MMA and looking to build upon his first-round TKO victory this past September. “Legionarius” has competed at 185-pounds for a majority of his nearly 14-year career but going forward the 34-year-old will be facing opponents at light heavyweight. With wins against Joe Vedepo, Thales Leites, and James Irvin already on his record, Sakara will have plenty to fight for when he enters the fray in front of a partisan crowd on April 16. It’s worth noting that Sakara has also taken professional boxing tilts, compiling a record of 8-1 with six wins coming by way of knockout.

Sakara’s opponent Rogers recently moved up in weight classes, making the jump from 185 to 205-pounds. The 31-year-old Strikeforce veteran has been competing under the Bellator MMA banner since 2011 and has had 11 fights along the way. Most recently, “The Professional Predator” finished Virgil Zwicker via arm-triangle choke, putting the exceptional roster of Bellator MMA light heavyweights on notice. Now, the Denver, CO. based slugger looks to add to his impressive record of finishing fights when competes for the first time in 2016.

The 20-year-old McKee undoubtedly has the attention of everyone in the MMA world after a 3-0 start to his career, and for good reason. The son of respected MMA veteran, Antonio McKee, A.J. fights with fearlessly aggressive, unorthodox approach that results in pure excitement and has fans and media alike clamoring for more. He will be facing Belluardo (5-1), who is sure to have the Italian fans in full support of his effort.

With his stoppage of up-and-coming Bellator MMA middleweight contender Hisaki Kato at the conclusion of 2015, the 39-year-old Manhoef has proven once again that he has plenty left in the tank. “No Mercy” has competed in more than 100 professional bouts during his combat sports tenure, with more than 50 of his victories coming by way of knockout. Look for that trend to continue when the dangerous striker returns to action in Northern Italy.

It’s easy to classify Anastasia Yankova as “just another pretty face,” but the 24-year-old Russian Muay Thai Champion has the fighting skills to more than match her good looks. Undefeated thus far in her budding MMA career, the Moscow native has attacked the limbs of both her opponents and earned early submission stoppages, piquing the interest of promotions around the globe. Ultimately, the Akademiya Box product recently signed a long-term contract with Bellator MMA, which continues to build out its impressive women’s flyweight division.

The 35-year-old Ross is a highly regarded American Muay-Thai kickboxer. Ross has racked up a slew of championships during his 52-fight career, including the WBC Muay-Thai USA welterweight title, the WBC Muay-Thai International Super-lightweight title and the Lion Fight Super Lightweight Championship. Known also as “The Soul Assassin,” Ross is working on a transition into the sport of MMA.

Daniels is a multi-time champion karate fighter who made a name for himself under the now defunct World Combat League banner. A confident, explosive striker who owns some of the most highlight-reel worthy knockouts in kickboxing history, Daniels has only been defeated four times in over 29 appearances while competing in some iteration of combat sports. Now, “The Real Deal” looks to showcase why he proudly wears the acronym “G.O.A.T.” on the back of his tights when he fights in Torino, Italy on April 16.

2015 was a record-shattering year for the Scott Coker-led Bellator promotion. The success was powered by several major events including “Bellator 138: Unfinished Business,” which generated 2.9 million viewers and “Bellator: Dynamite 1,” which set company records for attendance and gate. The April 16 event in Torino marks Bellator’s first-ever event overseas, but it won’t be the last, as the promotion has announced plans for additional international events in London and Israel slated for later this year.

By Bjorn Morfin 17 hours ago