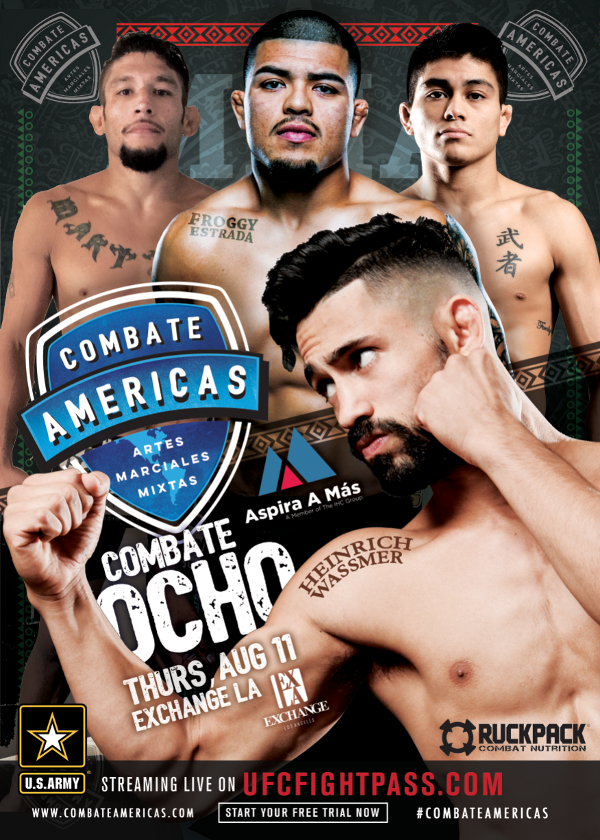 In addition, the planned women’s atomweight (105 pounds) matchup betweenKyra “Mogwai” Batara (5-3) and Lisa Ellis (15-10) has been scrapped due to a hamstring injury sustained by Batara.

“We wish Erick, Jonathan and Kyra speedy and full recoveries, and have the utmost respect for John Castaneda and Danny Martinez, two ferocious warriors who did not hesitate to accept our offers to face super tough opponents in the top two fights on our card, on short notice,” said Combate Americas CEOCampbell McLaren.

The 24-year-old Castaneda of Mankato, Minn. is riding a five-fight win streak, the last three of which came inside the Combate Americas cage, or “La Jaula.”

To date, the fast-rising star who normally competes at bantamweight (135 pounds), but who began his career as a featherweight, has notched 7 of his 10 professional career wins by way of (T)KO or submission.

Martinez of Chula Vista, Calif. will see action for the first time since his unanimous decision win over Richie Vaculik at UFC 193 last November 14.

The 31-year-old finisher, originally hailing from Tempe, Ariz., has earned 14 of his 19 career victories by way of (T)KO or submission.

Doors at the Exchange LA open for the event at 5:30 p.m. PT, and the first preliminary card bout will begin at 6 p.m.  The live UFC FIGHT PASS stream will commence at 6:30 p.m.