UFC returns to the world famous Madison Square Garden with a compelling pair of world championship rematches at UFC 268. Headlining the event will be UFC welterweight champion Kamaru Usman as he looks to defend his title once again against heated rival and No. 1 ranked contender Colby Covington.

The co-main event will see UFC women’s straw-weight champion Rose Najamunas aim to make it two in a row against former champion and No. 1 ranked contender Zhang Weili.

Before we get to all that, a bout that is guaranteed to be a banger. In the featherweight division Billy Quarantillo and Shane Burgos will compete in a match-up on the main card.

Quarantillo (16-3), is coming off a third-round TKO finish of Gabriel Benitez in his most recent appearance at UFC Vegas 31 in July. Quarantillo currently has a record of 4-1 inside the UFC, falling short to Gavin Tucker in that time.

Burgos (13-3), is on a two-fight losing skid – falling short to a Josh Emmett at UFC Vegas 3 in June 2020 via unanimous decision and a third-round knockout loss to Edson Barboza at UFC 262. Two of the last three fights for Burgos have finished inside the distance, including a third-round KO/TKO Nov. 2, 2019, over Makwan Amirkhani for his most recent victory.

Here is how the fight played out:

Billy opens up early with a leg kick, putting the pressure on early. Uppercuts from Billy, Burgos is returning at range. Burgos lands a leg kick of his own. The jab of Billy is staying active, redded the nose of Burgos already. A big swing from Billy over the top lands. The pace and pressure of Billy is admirable, the volume seems to be a problem for Burgos. Level change from Billy, stalemate up against the cage now. They break, Billy straight back to work with the jab. Burgos lands clean, Billy drops to one knee and bounces back up! The end of the first round.

Burgos opens up early this round, Billy returns of his own. The jab from Billy is relentless, constantly in the face of Burgos. Both men trading in the centre. Inside fighting from both men, this has been a fantastic fight. Unfortunately it followed Gaethje vs. Chandler, not getting the credit it deserves. Burgos lands clean, Billy is hurt bad at the end of the round. Burgos is POURING IT ON! THE BELL GOES.

Billy and Burgos land a straight right each to kick off the round. Billys lead leg is beat up, he’s a one legged fighter at this point. Billy still pushing forward and hunting for the takedown, with no success. Elbow over the top from Burgos, Billy returns firing hooks widely. A minute left in the round – the work rate these men have oit in across 15 minutes is CRAZY! What a fight, phenomenal. Both men swinging to the end of the bell. 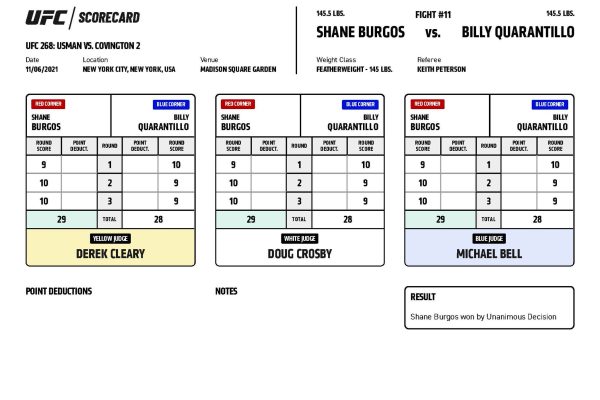 By Brady Briggs 10 mins ago

By John Eric Poli 17 mins ago