Shelton “the Gravedigger” Graves asks for Barrett, Gets wish at ROC 56

Shelton Graves is always eager to go to work. He will grind with the best of them. He has victories over Zu Anyanwu and a dominant TKO win over Bellator vet Lorenzo Hood to his credit. Graves yearns to get better and challenge himself.  He politely called Brendan Barrett to ask for the fight. Brendan is the defending Heavyweight champ and a wrecking ball in the cage. I got to talk with the challenger about his upcoming main event fight.

“The Gravedigger” is a master of leverage in the cage. When I asked him about his decided advantage in dictating where the fight goes, he said “I played football and basketball through high school, that’s where I seemed to develop and learn how to use my body.”

A big body it is, as he will tip the scales very close to the 265 lb limit.  Barrett goes around 260 so we are looking at two very large, athletic men in the cage.

Graves trains at Top Flight MMA, under Ron “Choirboy” Stallings for his boxing and kick boxing and credits all of his teammates and coaches for making him the fighter that he is today.

I asked him to describe his fighting style and he said “whatever it takes to win the fight is my style.”

Asked about a prediction for the fight, he said that he’s going to go to work and he won’t be outworked.

This is a battle of two titanic men. A heavyweight clash to finish the fourth of four championship bouts at Ring of Combat 56 this Friday night, September 23 in Atlantic City. 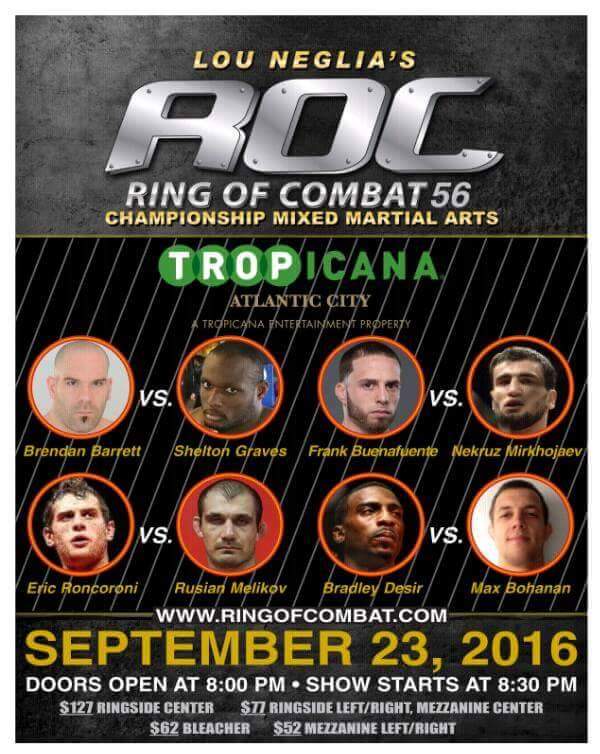