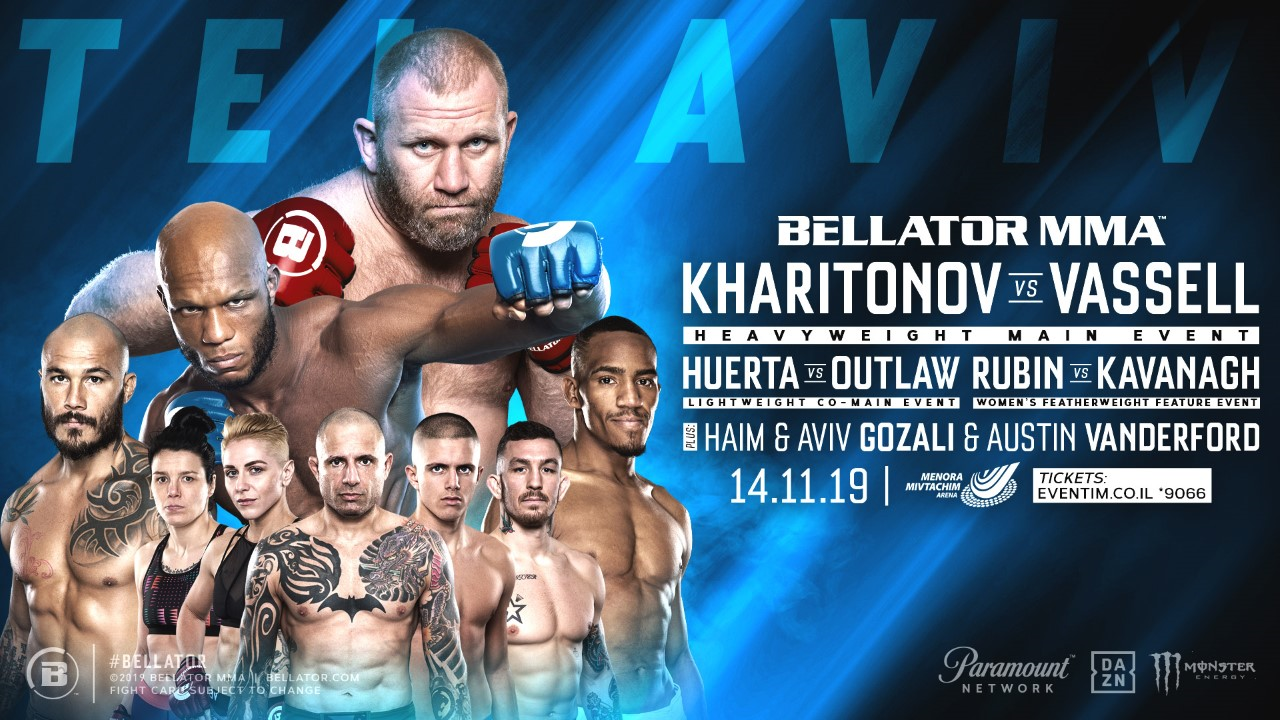 Plus, Bellator Inks Three New Israeli Athletes to Exclusive Contracts, Furthering Commitment to Growth and Development of MMA in Israel

On the heels of three consecutive sellouts, Bellator returns to Tel Aviv, Israel on Thursday, Nov. 14 with a heavyweight clash between the hard-hitting Sergei Kharitonov (30-7, 2 NC) and former No. 1 contender Linton Vassell (19-8, 1 NC) set to anchor Bellator 234 inside Menora Mivtachim Arena.

In addition, the always-exciting Roger Huerta (24-11-1, 1 NC) squares off against the recently signed Sidney Outlaw (13-3) in the lightweight co-main event and Austin “The Gentleman” Vanderford (8-0) looks to stay undefeated as a professional against Grachik Bozinyan (10-3) at middleweight. Rounding out the main card action, fans will see a women’s featherweight contest pitting Israel’s Olga Rubin (6-1) against Ireland’s Sinead Kavanagh (5-4), while father and son, Haim Gozali and Aviv Gozali, will both compete on their home turf once again, fresh off Aviv’s record-setting 11-second submission win in August.

Tickets are on sale now and are available at Eventim.co.il, as well as Bellator.com. The event will air in the U.S. via tape delay on Friday, Nov. 15 at 9 p.m. ET/8 p.m. CT on Paramount Network and can also be streamed on DAZN. Additional bouts will be announced in the coming days.

Bellator has continued to host incredible events in Tel Aviv, in what has become a highly anticipated annual return, delivering world class championship fights, as well as undercards matchups comprised of the best local talent. Maintaining its commitment to Israeli MMA, Bellator is pleased to announce the signings of Raz Bring (4-2), Adam Keresh (3-0) and Simon Smotritsky (5-0) to exclusive multi-fight agreements.

Bellator remains partnered with Ananey Communications, an Israeli television conglomerate boasting 14 channels, including the EGO and EGO TOTAL channels, which have broadcast Bellator in Israel since 2012.

Riding an eight-fight unbeaten streak, including four first-round finishes and three knockouts, Sergei “The Paratrooper” Kharitonov returns to action following his TKO finish of Matt Mitrione at Bellator 225. Now, the native of Plesetsk, Russia will seek to add another name to his list of victories amassed around the globe, which already includes Roy Nelson, Fabricio Werdum, Andrei Arlovski, Pedro Rizzo and Alistair Overeem.

A former title challenger at light heavyweight, Linton Vassell will return to the Bellator cage for the second time in 2019, following a bout against Valentin Moldavsky in March. A 12-fight Bellator veteran, “The Swarm” has made Florida his home following years on European soil. With 14 of his 18 wins coming by way of stoppage, Vassell will be looking to stop his opponent early in the main event matchup.

Hailing from Los Angeles, Roger Huerta will be returning to the Bellator cage for the first time in 2019 and sixth time overall when he challenges Outlaw at Bellator 234. An eight-fight veteran of the UFC, “El Matador” boasts an impressive professional record of 24-11-1, 1 NC over a 16-year stint that includes iconic battles with the likes of Eddie Alvarez, Pat Curran, Benson Henderson, and Patricky “Pitbull.” With 17 of his 24 career wins coming by way of knockout or submission, the Muay Thai fighter possesses the type of fire power necessary to put an end to Outlaw’s current seven-fight winning streak.

Now training at American Top Team in South Florida, Sidney Outlaw looks to keep the ball rolling at Bellator 234, where he plans to add an eighth straight victory and his second inside the Bellator cage. With half of Outlaw’s professional wins coming by way of submission, including five first-round finishes, the 27-year-old lightweight will be looking to make quick work of his opponent once again on Nov. 14. Making his first promotional appearance since defeating Mike Bannon at Bellator 118 five years ago, the Philadelphia-native hopes to remind Scott Coker and company just how dangerous he can be.

Fresh off his first Bellator victory at 185-pounds, Austin Vanderford will return to action quickly when he competes internationally for the first time. The undefeated Portland Gracie Barra-product has finished six of his eight victories and recently showcased his vicious ground-and-pound prowess when he sliced his Bellator 225 foe with a fight-ending strike. Now, with Bellator fighters taking note of his skillset, “The Gentleman” will get his toughest test to date when he meets Bozinyan.

Recently signed to Bellator, Grachik Bozinyan is only 24-years-old and has won five out of his last six in-cage appearances, most recently competing in ACB and on the regional circuit in Russia. Nicknamed “Black Stone,” Bozinyan has won all 10 of his professional wins via finish and enters his next fight looking to hand the unbeaten Vanderford the first loss of his career.

Making her sixth appearance since signing with Bellator in 2017, Olga Rubin looks to build on a pair of notable knockouts in her first two promotional appearances at Bellator 164 and Bellator 188. The 30-year-old prospect has bolstered her resume with dominating victories over the likes of Cindy Dandois and Iony Razafiarison. Now residing in Holon, Israel, “Big Bad” splits her time training between Tel Aviv and London’s Team Titan under the tutelage of UFC-veteran Brad Pickett.

Always one to favor her striking, Sinead Kavanagh has become a mainstay in Bellator’s women’s featherweight division, going toe-to-toe in exciting back-and-forth battles with Leslie Smith, Janay Harding and Arlene Blencowe. Now, the SBG Ireland-product will be looking to bounce back in Israel, against an opponent she was originally set to face at Bellator 217, before she was forced to withdraw due to injury.

The 23-year-old Raz Bring competed at Bellator 164 in 2012 and Bellator 188 in 2017, earning dominant victories in both appearances. Currently fighting at bantamweight, “New Level” has also appeared in the flyweight division. Bring made his professional debut in 2016 and currently trains at MMA Black Belt gym in his hometown of Modi’in, Israel.

Last competing at Bellator 209, unbeaten heavyweight Adam Keresh made quick work of “Baby Fedor” Kirill Sidelnikov, knocking him out at just 1:12 of the very first round to kick off the promotion’s main card. The finish follows his dominant ground and pound victory over Roma Kushnir in his 2017 Bellator debut at Bellator 188. Currently training at Team Bert in his hometown of Tel Aviv, the heavy-handed prospect has yet to see a fight go to the judges.

The undefeated Simon Smotritsky is currently competing at welterweight and stands at 5-0 in his pro career with several dominant finishes to his credit. At just 19 years of age, “Assassin” made his promotional debut last year defeating Matan Levi at Bellator 209 and looks to return to the Bellator cage this fall. Smotritsky trains at Teampact Holon in his hometown of Holon, Israel.

Julio Arce evaluates past to better his future

Four UFC Featherweights On The Rise