months, as he won his first championship at 135 lbs in November with a first-round submission (triangle choke) over then champion Dwight ‘Hard as Stone’ Cephas, a rematch of their first encounter.

After losing his first fight via a cut he suffered early on, he’s gone on an absolute tear since!

Since then, he’s defended his title two times against the likes of Darryl ‘Rampage’ Watson via second round knockout (head kick), and ‘Hard as Stone’ in their trilogy via third round submission (armbar).

‘Sensation’ then moved up to 145 lbs to capture his second title this past weekend on May 7.

His opponent, Cody ‘Kraken’ McCracken was coming off a third-round TKO victory in an amateur fight up at 155 lbs, where his opponent, Christian Lubenga, unfortunately passed away in the hospital two days following the bout.

‘Sensation’ beat ‘Kraken’ in a mere 14 seconds, and he fights two divisions below 155 lbs. Going into this fight as the bantamweight champion, this was of course the bout that saw him capture the featherweight championship, thus making him a champ-champ, or more properly termed, a two-division champion.

What’s really impressive about this streak however, he’s 11-2 in Satan’s Backyard (all 11 wins coming via finish), and he didn’t even train at a gym until he was leading up to his trilogy with Stone. 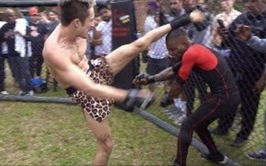 That was the first time he really had a proper camp, and proper coaching going into a fight.

The Korean-American from upstate New York also holds wins in both boxing and kickboxing, where he also boasts finishes in each victory.

‘Sensation’ showcases great top pressure and ground-and-pound when he’s on top; his guard is wicked, he catches a lot of opponents with submissions off his back, and he has a very flashy, yet incredibly dangerous style of striking.

Summed up, ‘Sensation’ is like a StreetBeefs version of Anthony Pettis.

Every time he fights, it’s ‘Showtime’. He’s perhaps the most entertaining fighter this regional show has on the roster, and he’s improving rapidly now that he finally has a gym to call home. 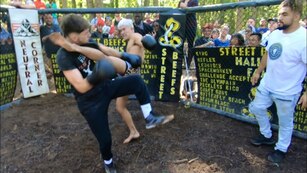 He’s as athletic, powerful, incredibly durable, and naturally gifted as they come.

Did we mention he’s still only 20 years old?

‘Sensation’ has all the time in the world to continue improving, and he’s already off to an incredible start.

Continue reading below to learn more about the prodigy we call ‘Sensation’:

What got you into MMA – “I’ve always been fighting as a kid, teenager, just because people would never leave me alone growing up. I’d seen a couple MMA fights on TV; the first real memorable one was McGregor vs Diaz.

“(It) Was in my YouTube recommendations back when I first got a tablet. I watched that and thought it was just the coolest thing. So I was always interested in it. But when Covid hit and I couldn’t play hockey anymore I decided to give it a try, and I fell in love with it.”

Were you bullied in school – “Oh horrifically, yeah. A lot of it I think was racial. I was like the only Asian in my school.”

Why do you fight – “It’s like, such a rush. There’s no other thing I can compare it to. I wouldn’t call it fear, but it’s like that intensity, it brings something out of me. I love it. I kind of do it for myself too because I like to feel, you know, proud of myself.

“It’s something I can work on. Every time I fight and I improve on something I’m proud of myself.”

Who’s been your toughest test to date – “I would say Turk was. He was so long and rangy, and I never really had to deal with that. I’m used to being the long (and) rangy one. And I was young and pretty new to it when I fought him, so I didn’t really understand how to handle that.

“I ended up getting clipped, and he was really strong too; I tried to wrestle with him, I was able to get him down but I couldn’t move him. So, I would say stylistically he was my hardest match up.”

Who is your favorite fighter – “I would say Charles Oliveira is my favorite right now. I like Colby Covington just because of how he shook up the welterweight division, and I’m always going to watch whoever he’s fighting just to see if someone kicks his ass, or if he makes everyone mad again.

“I kind of see myself in Oliveira because he’s counted out a lot, and you know, he’ll get hurt, he’ll get knocked down or something, you think he’s done, and he’s got no quit lately. My dream match up would be to see him and Khabib (Nurmagomedov).”

How far do you intend on taking this journey – “As far as my body will let me. I mean, I’d love to go pro and be a world champion one day. And to most people that’s going to sound ridiculous, but I’ve already done more than everyone else told me I could.

“People never thought I’d even win a fight, let alone be a champion.

“I don’t wanna limit myself, but if I get too injured or whatever, I’ll have a backup plan. I’m gonna take it as far as my body will let me.”

Have you had to deal with any injuries – “I’ve had so many injuries. So my first fight I took, I went into with a broken foot. It would take something very, very severe for me to pull out of a fight. Then obviously I had that big (shoulder) surgery, and I already said I was gonna fight so I went in (and) fought two fights in one day, with one arm.

“And in the fight with you actually, I broke my foot on your knee. All I did was ice it, and I had another fight in three weeks (kickboxing title fight) and I fought with one foot. So yeah, I’ve had to deal with a few injuries, I just try to not think of it in there. Just fight as if it’s not hurt, ya know?”

Where area of your game needs the most improvement – “I used to think it was my ground game, specifically my wrestling, but I’m starting to think it’s my boxing. And not my boxing boxing, because I feel like if I’m ready for a boxing match I can box with a lot of people, but my MMA boxing is kind of, not all there. Like my footwork especially.”

What’s been your biggest area of improvement since finding a gym – “Definitely my Jiu-Jitsu.”

What are your goals for 2022 – “So obviously I want to hold onto my belts now. And you know, I know there’s a lot of savages in StreetBeefs but I’d like to move up again and become the first triple-champ.

“I also wanna have my first sanctioned MMA fight, like my first amateur fight this year. I’d say those are my goals right now.

“I think there’s quite a few amateur promotions that I could be at least no. 1 contender (in) and have some wars with the champions. So I think I wanna be on a massive win streak before I go pro. My goal for that was to be before I turned 25, but I’m not gonna rush myself at all.”

What are your goals for 2023 – “To actually have a belt, as far as Jiu-Jitsu (goes). I’m not even a white belt technically. I’d like to become a blue belt by 2023. That’d be pretty cool, to actually get into a gi Jiu-Jitsu class and actually have a ranking.”

What’s next after this fight – “Well, I’m gonna go see my family after this fight, I haven’t seen them since I’ve been in the gym, when I moved away to start training. So I’ll spend time with them, obviously like I said, I wanna line up that other title fight if I can. But I think I might take a month to myself and just be with my family. That’s what’s really important to me.”

If you weren’t a fighter what would you be – “If I wasn’t a fighter, I’d still be at my old college. I started in biology, but it was a lot to handle when I wasn’t ready for college in all honesty.

“So I switched to psychology and I really liked that, and right now I’m enrolled in sports medicine. I’m on a break semester (right now). But I’d probably be getting ready to graduate. I’d wanna be an occupational therapist and work with veterans if I could.”

How do you juggle a job, school, and training – “I mean, it’s all mental. I always say, ‘if you have an excuse, you made it up.’ Because I get home from work, and obviously I’m exhausted; I wanna lay down, I wanna sleep, I wanna eat chips and ice cream, watch TV…

Most common questions you’re asked – “It used to be how long I’ve been training or what gym I’m from, and I never had a real answer for that. I was always kind of just training with my friends, not real, organized training. I was never in a gym. But it’s cool I have an answer for that question now.

“That, and a lot of people ask me if I took karate as a kid, and I think that’s because of some of the kicks I throw.”

If StreetBeefs had walkouts, what would your song be – “‘Cinderella Man’ by Eminem or ‘Many Men’ by 50 Cent (remix)”

Whatever is next for this young gun, it’ll certainly be exciting to say the least. Sky is the limit for his future, and it’d appear he’s just getting started. Give Sensation a follow on Instagram @eddie17brown

He’s up for accepting new sponsors if you’re interested, and he’s always down to make new fans.

Thank you for reading, and we hope to see you view his next fight!