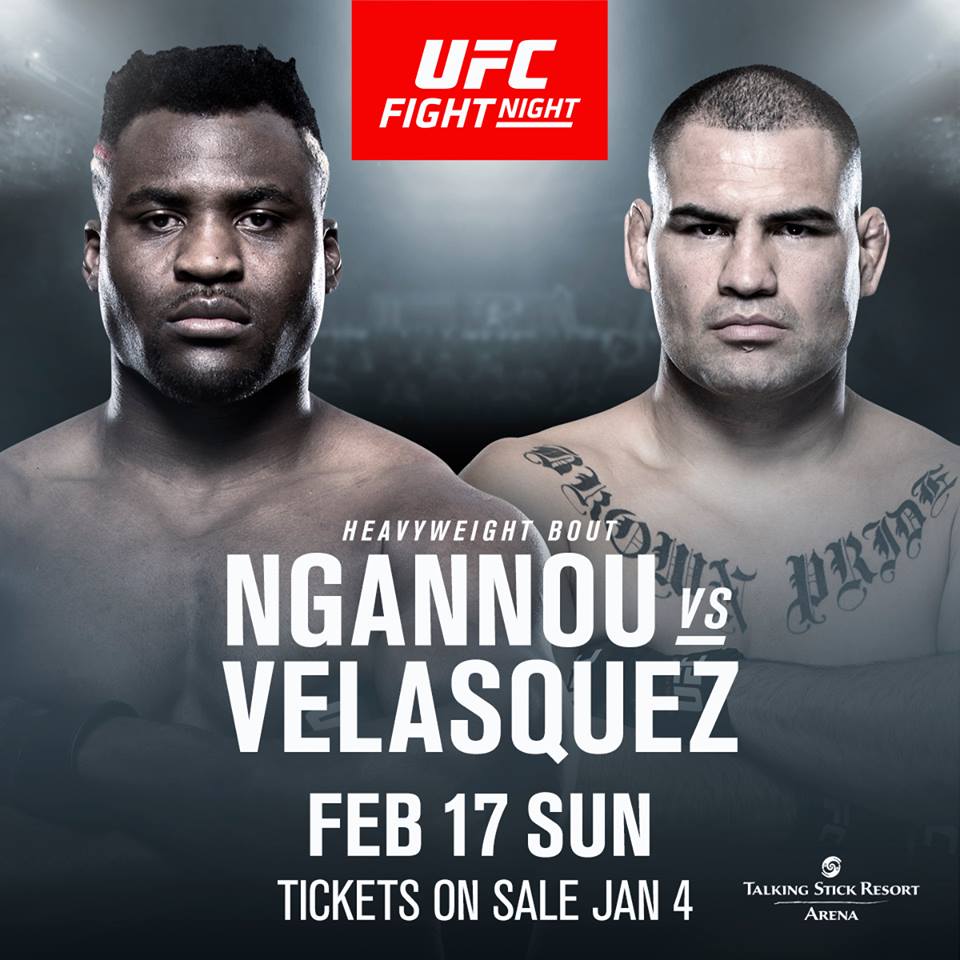 Known for his spectacular punching power, Ngannou (12-3, fighting out of Las Vegas, Nev. by way of Batié, Cameroon) looks to build on his momentum following a 45-second TKO win over Curtis Blaydes in November. During his UFC run, Ngannou has earned highlight-reel knockouts against Alistair Overeem, Andrei Arlovski and Luis Henrique, and is now poised to re-assert himself as a title threat by taking out one of the greatest heavyweights in UFC history.

A two-time heavyweight champion, Velasquez (14-2, fighting out of San Jose, Calif.) returns from a two-plus year hiatus. A talented grappler and striker, his last outing saw him net a TKO win over Travis Browne at UFC 200. Velazquez has delivered thrilling victories over the course of his legendary career, including wins against Junior Dos Santos (twice), Brock Lesnar and Minotauro Nogueira. He now looks to earn another shot at the title by stopping one of the division’s hardest hitters.

Having won four of his last five outings, Vick (13-2, fighting out of Fort Worth, Tex.) looks to get back on track with a show-stealing victory. Vick has netted impressive stoppage victories against Joseph Duffy, Polo Reyes and Abel Trujillo. He now hopes to derail another surging contender and re-stake his claim as one of the division’s biggest threats.

Known for his devastating elbows, Felder (15-4, fighting out of Philadelphia, Penn.) has asserted himself as one of the division’s most aggressive finishers. Felder has earned Performance of the Night bonuses for his KO wins against Stevie Ray, Alessandro Ricci and Danny Castillo. He aims to continue climbing the ranks by picking up his fourth consecutive lightweight win.

Announced bouts on the card include:

No. 5-ranked bantamweight contender Jimmie Rivera (22-2, fighting out of Ramsey, N.J.) looks to work his way back into the title conversation by taking out No. 7 Aljamain Sterling (16-3, fighting out of Uniondale, N.Y.)

Phoenix’s own No. 11-ranked women’s strawweight Cortney Casey (8-6, fighting out of Phoenix, Ariz.) intends to put on a show for her hometown fans when she meets No. 12-ranked Cynthia Calvillo (7-1, fighting out of Sacramento, Calif.)

Welterweight prospect Vicente Luque (14-6-1, fighting out of Brasilia, Brazil) looks to break into the rankings for the first time by taking out hometown favorite Bryan Barberena (13-5, fighting out of Glendale, Ariz.)

Scott Holtzman (12-2, fighting out of Knoxville, Tenn.) aims to extend his winning streak to four when he faces battle-tested veteran Nik Lentz (29-9, fighting out of Coconut Creek, Fla.)
Former women’s strawweight title challenger Jessica Penne (12-5, fighting out of Huntington Beach, Calif.) looks to start 2019 with a big win by taking out Jodie Esquibel (6-4, fighting out of Albuquerque, N.M.)