The unbeaten Gane takes one one of his highest ranked opponents to date in former Bellator heavyweight king, Volkov, inside the UFC Apex in Las Vegas, Nevada.  Sticking with the theme, heavyweight Tanner Boser and Ovince Saint Preux hope to crack the top 15 with a win in the evening’s co-main event on ESPN+.

Gane is a perfect 8-0 in his career, including six finishes.  He is coming off a unanimous decision win over Jairzinho Rozenstruik at UFC Fight Night 186 last February.

He finished three out of his previous five octagon opponents. He currently hold victories over Rozenstruik, Junior dos Santos, Tanner Boser, Don’Tale Mayes and Raphael Pessoa under the UFC banner.

Volkov is fresh off back-to-back second-round TKO victories over Alistair Overeem and Walt Harris. The pair of stoppages came after he dropped a unanimous decision loss to Curtis Blaydes at UFC on ESPN 11 a year ago.

Boser is looking to rebound after two-straight decision losses to Ilir Latifi and Andrei Arlovski. Saint Preux is returning to heavyweight after losing a decision to Ben Rothwell back in May 2020.

Saint Preux picked up a knockout win over Alonzo Menifield and suffered a TKO loss to Jamahal Hill at 205 pounds since making his heavyweight debut. 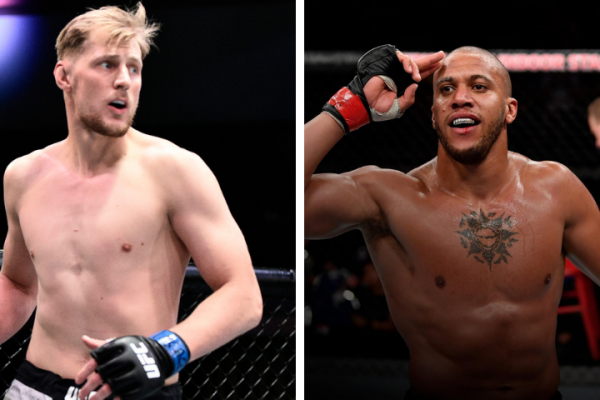 Official decision: Tanner Boser def. Ovince Saint Preux via knockout at 2:31 in round 2.

Official decision: Kennedy Nzechukwu def. Danilo Marques via TKO at 0:20 in round 3.

Official decision: Jeremiah Wells def. Warlley Alves via knockout [punches] at 0:30 in round 2.

Official decision: Marcin Prachnio def. Ike Villanueva via TKO at 0:56 in round 2.

By Cole Shelton 15 mins ago