The UFC set their all-time attendance record at UFC 193 in Melbourne, Australia back in November with 56,214 fans in attendance.

Now that mixed martial arts has officially been given the green light in New York, the possibilities for venues are endless.  Of course Madison Square Garden is first on the list, but what about other historic attractions, such as the home of the New York Yankees, Yankees Stadium? 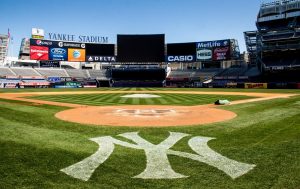 The stadium currently seats 54,251, however if seats are added on the field such as they were at Etihad Stadium for the Melbourne show, the attendance record could be shattered.

The North American attendance record of 55,724 was set at UFC 129 at Rogers Centre in Toronto.

UFC co-owner Lorenzo Fertitta recently spoke to Newsday and said that Yankees Stadium is on the list of places to talk to.

“There’s a bunch of other venues we want to go to,” said Fertitta. “We want to go to Barclays, we’ve had discussions with Yankee Stadium to do something next summer there.”

The UFC is currently booked for Madison Square Garden on November 12 of this year.  The announcement came last week after mixed martial arts was legalized in the state.