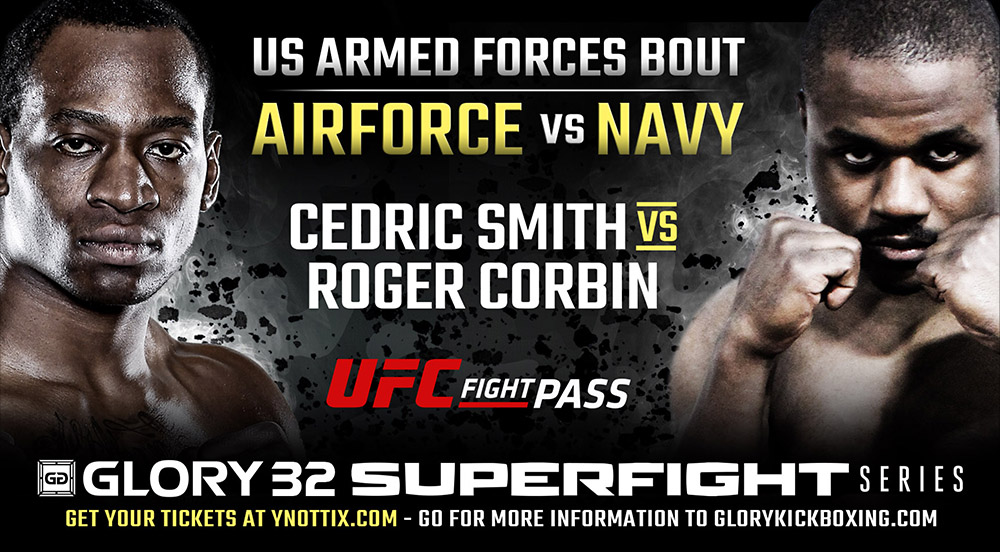 New York, NY – GLORY, the world’s premier kickboxing league, today announced a special exhibition bout between members of the US Armed Forces to kick off GLORY 32 SuperFight Series from Ted Constant Convocation Center in Norfolk, Va. on Friday, July 22. Streaming live and exclusively on UFC Fight Pass at 7:30 p.m. ET, the bout will feature competitors from the US Air Force and US Navy.

Representing the US Air Force, Cedric Smith (aka Cedric Savage) defends his military championship belt – earned at GLORY 19 Virginia – against Roger Corbin, representing the US Navy. The bout will be contested at a 195 lb catchweight.

Corbin, training out of Level Up Boxing & Fitness in Bowie, MD, made his muay thai debut on July 8th, winning via first-round knockout.

“Cedric [Smith aka Savage] dazzled the crowd with an incredible performance at our last event in Virginia. The servicemen and women in attendance — along with the rest of us — were impressed,” said GLORY CEO Jon Franklin.

“We are proud to have both Cedric and Roger [Corbin] competing in front of a global audience on UFC Fight Pass on behalf of their respective branches of service and we are appreciative of all those that are currently serving or have served.”

The updated six-fight card for GLORY 32 SuperFight Series can be found below:

Tickets for GLORY 32 Virginia and GLORY 32 SuperFight Series are on sale now, priced at $100, $75, $45, and $25. Tickets are available for purchase via ynottix.com or by visiting the Ted Constant Convocation Center’s Box Office.