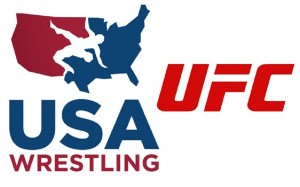 Colorado Springs – USA Wrestling, the national governing body for wrestling in the United States, and UFC® have jointly announced that they have renewed their partnership to promote interest in wrestling and mixed martial arts (MMA), while working together on a variety of projects to support each organization’s activities.

“USA Wrestling is pleased to renew its partnership with UFC, coming off a successful first year working together. Our sports are closely entwined, and there are many ways we can help support each other. We look forward to finding creative and effective ways to add even more value to this strong relationship,” said Rich Bender, USA Wrestling Executive Director.
“We are extremely excited to renew our partnership with USA Wrestling and continue to build on the success we’ve experienced over the last year,” UFC Vice President of Federation Relationships and Corporate Social Responsibility Lou Lauria said. UFC has a long and rich history supporting the development of amateur athletes and our relationship with USA Wrestling dates back to the very beginning of UFC.”

This is the second straight year the organizations have agreed to work together and find new ways to build and expand their cooperative efforts. Wrestling and MMA share a close connection which positively impacts both sports. Wrestling is a core skill set needed for success in MMA and is considered a foundational discipline within the sport.

Working together, USA Wrestling and UFC will continue to support and promote the development of wrestling. By leveraging UFC’s industry leading expertise and resources, USA Wrestling and its activities will be featured across several areas such as UFC’s broadcasts, social and digital media.

USA Wrestling is one of a select few national governing bodies within the Olympic community to be an official partner with UFC.