Venator FC, the leading mixed martial arts promotion in Italy, returns in Milan on October 14th for the first time since the monumental and controversial Venator III.

The upcoming card is stacked with many italian talents, one former UFC fighter and a couple of european prospects. The main attraction will be the “4-men welterweight tournament” disputed in one night for the gold at 170lbs. 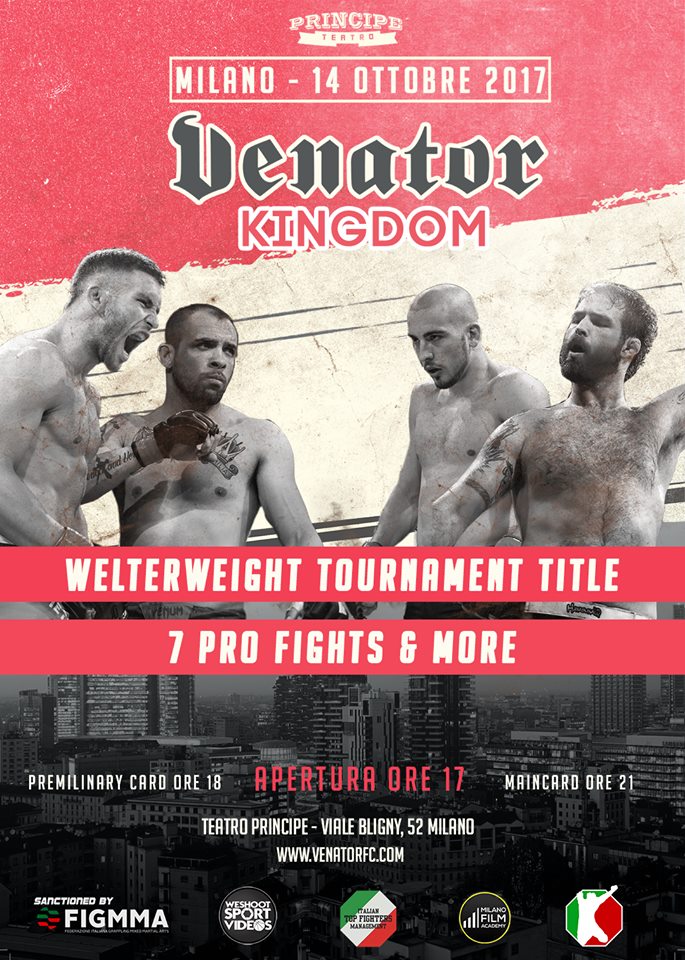 The welterweight belt is the most prestigious in Venator FC because the previous champions Marvin Vettori and Emil Meek were both immediatley signed by UFC after their last wins at Venator III in May 2016.

In this new tournament for the vacant title two italian rising stars will fights against two acclaimed foreign fighters. Not an easy task for the italian athletes because Giorgio Pietrini (11-4) will fight against the Spain’s own Eulogio Fernandez (11-7), winner of 8 in a row, and Stefano Paterno (7-2) squares off against the former UFC fighter Cody McKenzie (16-10).

Venator will take steps with fighter safety in mind. The semifinals of the tournament will be only two rounds, rather than three. Plus, alternate bouts are in place in the event of one of the winners not being healthy enough to continue. An alternate will only be used if a winner of matchup cannot advance due to injury concerns.

Venator Kingdom will be sanctioned by FIGMMA (Italian Federation of Mixed Martial Arts and Grappling) that will provide a full anti-doping testing. Plus the tourmanent will be officiated by the international referee Marc Goddard.

Other fights in the card includes: Angelo Rubino (5-3) vs Gheorghe Gritko (6-3), Marco Saccaro (5-0) vs Simone  Tabaglio (3-2) as alternate semifinals of the tournament and a lightweight scrap between Manolo Zecchini (5-0) and Marco Manara (8-4).

A worldwide live streaming of the show will be available on www.venatorfc.com provided by
cleeng.com.

Tickets are available online at www.clappit.com, starting from 33€

By Adam Crist 23 hours ago