Our co-main event at UFC 251 is the immediate rematch we all wanted, Alexander ‘The Great’ Volkanovski versus Max ‘Blessed’ Holloway II. Their first fight was a good one, it was competitive, but ultimately Volkanovski bettered the former champion throughout five rounds to become the new UFC Featherweight Champion. Now in his first title defense, he faces the man he took the belt from. Has Holloway made the proper adjustments since their first encounter? He’s only had half a year to make them, and as previously stated, it’s an immediate rematch, neither of them have fought since UFC 245.

‘Blessed’ is one of the most talented fighters we’ve ever seen in the sport. Even in his UFC debut when he was just 20-years-old, just 4-0 as a professional, he stunned the far more experienced Dustin Poirier and Joe Rogan was talking about how seasoned of a striker he looked like. He’s a prodigy, he always has been. After losing that fight, he won his next three, before losing his next two, bringing his record to 7-3. Those two losses came to Dennis Bermudez and Conor McGregor; he lost the McGregor fight hands down, but that Bermudez decision was incredibly controversial. 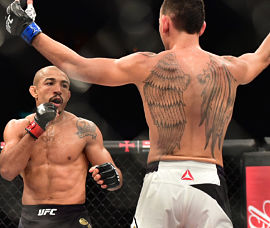 He then went on a 13-fight win streak, defeating the likes of Andre Fili, Cub Swanson, Charles Oliveira, Jeremy Stephens, Ricardo Lamas, and many more. In the middle of that win streak, he fought former WEC and UFC Lightweight Champion Anthony Pettis for the interim UFC Featherweight Championship, who he finished via TKO in round three. He then fought undisputed champion Jose Aldo in back-to-back outings, winning via TKO in round three in both of those fights as well, winning, and defending the UFC Featherweight Championship.

Holloway’s next bout came against Brian Ortega, and man what a fight that was! This fight showed the full arsenal ‘Blessed’ possesses, it was one of the most dominant performances ever, and it was one of the highest level featherweight match ups ever. An opportunity came to rematch Dustin Poirier for the interim UFC Lightweight Championship, considering Tony Ferguson was supposed to get the fight, but was going through personal issues at the time. Holloway jumped on the opportunity, and while it was an incredible fight, he ultimately lost via unanimous decision (49-46, 49-46, 49-46).

We saw, maybe he’s not a natural lightweight like we thought, he looked pretty small in there. He went back down to featherweight a few months later to defend his belt against Frankie Edgar, a fight he won all five rounds of, though the scores were (50-45, 49-46, 48-47), before dropping his next fight to ‘The Great’.

Volkanovski is a very athletic, physically strong, technical fighter that has given everyone he’s fought in the featherweight division fits. This is partially because he used to weigh 215 lbs when he was a rugby player, which is pretty insane to think about when we’ve seen him make 145 lbs numerous times. The other reason for this is due to his coaches and teammates; he’s got guys like Israel Adesanya, Dan Hooker, Brad Riddell, Kai Kara-France and others to train with, and an absolute genius in Eugene Bareman as his head coach.

‘The Great’ started out his martial arts tenure with Greco-Roman wrestling, which he won a national title in when he was just 12-years-old. He decided to give that up in order to focus on rugby, but ultimately gave rugby up and started training in mixed martial arts by time he was 22-years-old. He went 4-0 as an amateur at middleweight, then dropped down to welterweight for his professional debut. Once at welterweight, and once a professional fighter, Volkanovski won his first three fights, winning two titles, before losing to a 12-4-1 opponent in his fourth. 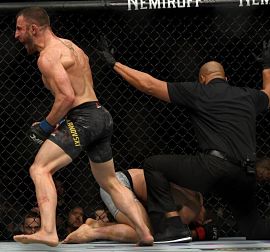 Once in the UFC, Volkanovski kind of flew under the radar for some time. It wasn’t until he fought Chad Mendes, or even Jose Aldo until people knew who he was, or how good he was for that matter. He doesn’t really do anything that stands out, he just does everything correctly and either out-points his opponents to a decision or out-points them until he lands those bombs on them.

After winning his first four fights in the UFC, two unanimous decisions and two TKO’s, he fought longtime UFC veteran Darren Elkins, a fight he dominanted and almost finished multiple times in round three. Then came his fight with Chad Mendes, who he almost got knocked out by, but ultimately ended up TKO’ing him toward the end of round two. This was his breakout performance, Mendes is the best featherweight ever to had never won the belt, and he finished him. 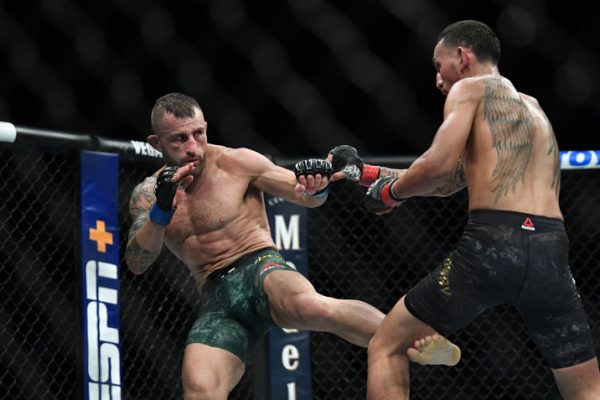 This is such a high level match up, it’s great we’re all being gifted the chance of witnessing it again. The first round of their first fight was very close, it could’ve went either way. Volkanovski quickly started off with leg kicks, and he just never stopped throwing them throughout. They both countered one another throughout the round, it was a close one. Round two showed Volkanovski chew Holloway’s leg up through most of it, though Holloway landed some nice combinations toward the end, but it wasn’t enough to steal him the round.

Volkanovski started opening up with his hands in round three and tagged Holloway numerous times, while still chopping down Holloway’s leg. Holloway started switching stances, which shows they were at least effective enough to where he didn’t want to be kicked there anymore, but Volkanovski just started kicking that leg then. Holloway made a mid-fight adjustment where he started attacking Volkanovski’s body, but it wasn’t enough to get any other offense going. Both fighters had their moments in round four, but Volkanovski did more, and the fifth was a pretty close round, but still probably went to ‘The Great’. The striking totals for the bout favored Volkanovski 157-135.

One of the more unfortunate things about this, Holloway has now lost twice in his prime, at least at the beginning of his prime. He’s 28-years-old. Luckily he was given the chance to defend his title against Edgar before Volkanovski, because had he not, he would’ve lost two straight. Nothing against ‘The Great’, but it would be less than fortunate to see Holloway lose two straight, go 1-3 in his last four. He’s so talented, we should be seeing the best Holloway for a few years to come.

Now that Volkanovski is 31-years-old, he’s also at his peak, right in the middle of it. He’s shown us he’s capable of great things, including dethroning a featherweight goat. Holloway is one of the best strikers in the sport, that’s why it was so surprising to see his last fight go the way it did. He can fight from both stances, and he can strike in the middle of switching stances, it’s really a beautiful thing to see. It’s almost like watching TJ Dillashaw without the consistent head kicks.

The problem is, Volkanovski kicks so often, and his arms are actually longer than Holloway’s. ‘The Great’ is 5’8” with a 71.5” reach, while ‘Blessed’ is 5’11” with a 69” reach. Not to mention, it’s pretty unlikely Holloway finishes him, he most likely doesn’t hit hard enough. Volkanovski is used to fighting people bigger than him, and as previously stated, he used to weigh over 200 lbs, along with having a pretty massive head. The real question when predicting or thinking about this rematch though, how does their first fight look had Holloway checked those leg kicks?

Who wins this epic featherweight rematch?

By David McKinney 8 hours ago