Marlon Vera just broke through in a big way this past weekend at UFC 252, as he dismantled the ultra talented, formerly undefeated Sean O’Malley. This was such a highly anticipated match up that we’ve all been waiting to see for some time now. They were supposed to face one another about 13 months ago at UFC 239, but O’Malley was unable to compete due to his second run in with USADA for a tainted supplement. 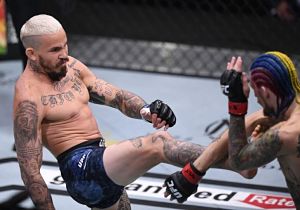 This fight didn’t last too long, and both looked great throughout it. Unfortunately, O’Malley was injured about half way through round one, which spelled the beginning of the end for him. He started off the fight as well as he could have, looking better than ever as he usually does, but he couldn’t get anything effective off once his leg was injured.

O’Malley landed some nasty calf kicks early on, along with other strikes. His footwork, angles, and feints were working great, until he wasn’t able to keep mobile. It appeared to be a leg kick thrown by ‘Chito’ Vera that injured O’Malley’s leg, though it’s uncertain. O’Malley started fumbling on himself and couldn’t move the same way he was at the start of the fight.

‘Sugar’ had one last ditch effort, where he threw a nice combination while switching stances in the middle of it, but he lost his footing and his leg gave out again. Immediately following his leg giving out, ‘Chito’ followed him to the ground and landed a thunderous elbow, followed by more punches to get the TKO finish at 4:40 of round one. 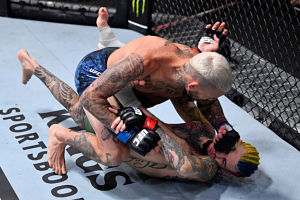 Marlon Vera was a relatively heavy sized underdog going into this fight, which is kind of surprising considering how good he is. O’Malley is something truly special, but we can’t count ‘Chito’ out of any fight, he could beat literally anyone on any given night.

This improved Vera’s bantamweight win streak to 6-0, his overall record to 16-6-1, and he’s now 6-1 in his last seven fights. Almost everyone believes he won his fight prior to O’Malley, though the result was a unanimous decision for Song Yadong. Vera has shown us one thing time and time again however, he’s a finisher, a very dangerous finisher at that. He also hasn’t ever been finished, all six of his defeats went the distance.

Of his 16 wins, 13 are finishes, with seven submissions and six knockouts. He’s very diverse with his submission attack as well; two came via rear naked choke, three triangle chokes, a heel hook, and an armbar. He’s had a Brazilian Jiu-Jitsu black belt for some time now to thank for that.

His striking has just gotten better and better too. He’s always been a good Muay Thai fighter, but he’s really pushed it lately. He’s constantly in his opponents face, breaking them down with a wide array of beautiful, technical strikes, and they just keep coming. He’s as fearless as they come in there. 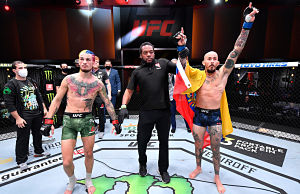 After the biggest win of his career, this begs the question, what’s next for Marlon Vera? To all of our surprise, he’s not ranked on UFC.com, but he did just finish the No. 14 ranked bantamweight in the first round. He belongs in the top 15, maybe even in the top 10. Vera is a serious problem for everyone at 135 lbs.

The No. 15 ranked Merab Dvalishvili just picked up his fifth win in a row this past weekend as well, as he dismantled former two-time UFC flyweight title challenger and The Ultimate Fighter 14 winner John Dodson. That’d be a good fight for all the fans, they both do nothing but come forward, but with very different attacks.

He could also rematch the No. 13 ranked Song Yadong, but do it at 135 lbs this time, rather than 145 lbs. It’d be great for him to get that win back. Rob Font is also a very interesting match up, he’s ranked at No. 10 and is coming off wins over Sergio Pettis and Ricky Simon. He’s a great boxer that has some decent kicks and front chokes to go along with it.

‘Chito’ is still only 27-years-old, and he’s already just about as good as they come. He should continue improving for another five years or so, and that’s very exciting.

What’s next for Marlon ‘Chito’ Vera?

By David McKinney 60 mins ago