Vicente Luque had an epic, trademark performance last weekend at UFC Vegas 5, as he finished yet another opponent, securing yet another knockout victory. He is now tied with Thiago Alves at eight knockout victories in the UFC welterweight division, the second most in the history of the company. The man on the list below him is Matt Hughes with seven knockouts, and the only man above him is Matt Brown with eleven knockouts. Even Robbie Lawler only has six knockouts in the UFC welterweight division, after all the time he’s been here. 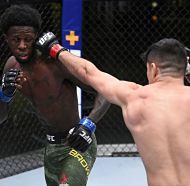 Luque is still only 28-years-old, he’s just approaching his peak; no one below him on that list is going to catch up, and Brown is close to retirement at almost 40-years-old. At the rate Luque’s been going, he’ll certainly have the most knockouts in UFC welterweight history by time his career is all said and done. He also stays very active, which will help this, as he’s had fifteen UFC fights in five years since joining the promotion.

Vicente Luque has been in the UFC since 2015, coming off The Ultimate Fighter 21, where he went 1-1 on the show with a submission (anaconda choke) victory and a split decision defeat. He lost his UFC debut via unanimous decision (29-28, 29-28, 29-28), bringing his record to 7-5-1. He then went 10-1 in his next eleven, avenging his TUF loss, finishing nine of those opponents (three submissions, six knockouts). 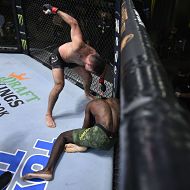 This man has such a marauder of a fighter, he just keeps coming forward no matter what, has great gameplans, and has all the skill in the world. He even TKO’d Thiago Santos in a middleweight bout in 2012 when he was 3-2-1 and Santos was 7-0. He hits so hard, he kicks so hard, his striking is very technical, but also brawler-oriented, and his grappling is phenomenal, especially his front chokes. He brought his record to 19-7-1 (12-3 UFC) on Saturday with his win over Brown, and that begs the question, what’s next for this welterweight assassin?

He’s expressed an interest in fighting Nate Diaz next, which would be an insanely entertaining fight, though it’s doubtful it’ll happen. Diaz does want opponents that will stand and trade with him, real fighters as he likes to say, but Luque most likely doesn’t have a big enough name to get him excited. There’s the winner of Geoff Neal and Neil Magny, which goes down at the end of this month. Whoever wins that fight would be a great opponent for him, or Robbie Lawler, Anthony Pettis, Rafael dos Anjos, they’re all top fifteen talents that would make for great match ups with him.

What’s next for Vicente Luque?

By Staff Report 7 mins ago

The Prodigy’s Successor: The Career of Frankie ‘The Answer’ Edgar