The Iron Lady: Who is UFC 208 headliner Germaine de Randamie?

Germaine de Randamie fights Holly Holm this Saturday in Brooklyn, New York at at UFC 208. This fight is to see who will become the UFC’s first ever women’s featherweight champion.

Everyone knows Holly for her huge upset win over long time bantamweight champion Ronda Rousey, but who exactly is Germaine de Randamie?

Germaine de Randamie is a Dutch fighter who is ranked currently as the #10 bantamweight fighter in the UFC.

The 5’9 “Iron Lady” started her martial arts career at the age of 15. In a short amount of time Germaine became a talented Muay Thai. Her Muay Thai record is an outstanding 37-0 with 14 KOs.

Cesar Gracie has called her the “female Anderson Silva.”

Training out of American Kickboxing Academy (AKA) in San Jose, California, Germaine just received her purple belt in BJJ.

Germaine’s MMA career started off in 2008. Unfortunately, she lost her first fight via armbar. Almost two years after her first fight, de Randamie returned to the cage and won her second fight by unanimous decision.

The following year Germaine received a contract from Strikeforce. 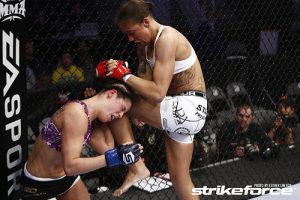 Germaine’s first fight with Strikeforce was June 29, 2011 on the Diaz vs Cyborg card. She fought Stephanie Webber and won via KO in the first round.

Her next fight was five months later and she lost by unanimous decision. The UFC called her and offered her a contract the following April. In her first UFC fight on July 27, 2013, Germaine fought Julie Kedzie.

She won that fight by split decision. A few months later she fought the current bantamweight champion, Amanda Nunes. Amanda dominated Germaine and won by TKO in the first round.

Coming off a year plus layoff, she returned with a nice TKO of Larissa Panchecho in the second round at UFC 185. Germaine’s latest fight was this past May in Rotterdam, The Netherlands. She beat Anna Elmose by TKO with some great Muay Thai knees to the body.

Germaine is 6-3 in her short career heading into the title fight this Saturday against Holm. She has the tools to not only beat Holm but, beat her with some devastating Muay Thai strikes. Both fighters are well established on their feet, so this will make for an exciting kickboxing contest.

Tune in to UFC 208 this Saturday night only on PPV to see who becomes the first female featherweight champion.

By James Lynch 17 hours ago