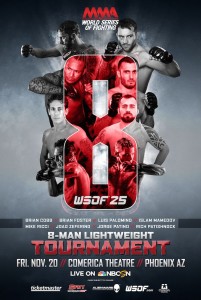 Winner will be named number one contender for world 155-pound title
LAS VEGAS (October 7, 2015) –World Series of Fighting (WSOF.com) will return to Comerica Theatre in Phoenix, Ariz. with a historic, one-night, eight-man tournament that will appoint its winner the number one contender in the promotion’s fearsome lightweight (155 pounds) division, on Friday, Nov. 20, live on NBCSN at 9 p.m. ET/6 p.m. PT.

Priced from $29.99, tickets for “WSOF 25: Eight-Man Lightweight Tournament” go on sale on Friday, Oct. 9 at 10 a.m. PT at the Comerica Theatre box office as well as online at Ticketmaster.com and WSOF.com.

Quarterfinal stage matchups for the tournament will be announced soon.

“We are excited to roll out our first-ever, one-night tournament filled with some of MMA’s top lightweight fighters, and to distinguish a new number one contender in this weight class that has been growing aggressively and is packed with world-class talent,” said World Series of Fighting President Ray Sefo.

Palomino (23-11) of Miami, Fla. is coming off an unforgettable, second, all-out slugfest with reigning, undefeated World Series of Fighting lightweight champion Justin Gaethje in the main event of WSOF 23, a fight that was named “Fight of the Month” for September last week.

The 34-year-old Palomino, who holds notable wins over the likes of Jorge Masvidal, Gesias Cavalcante and Patino, put Gaethje on the defensive in the outset of their rematch before being stopped near the close of the second round (4:30) with a Gaethje barrage of punches.

Another proven entity who has fought remarkable wars in the cage, Foster (23-7) of Sallisaw, Okla. is fresh off a spectacular performance at WSOF 23 where the 31-year-old scored a thunderous, first round (:32) KO (punch) of previously unbeaten LaRue Burley.

Ricci (10-4) of Montreal, Quebec, Canada is one of the latest additions to the ever-growing World Series of Fighting roster.  The 29-year-old, Firas Zahabi-trained Brazilian Jiu-Jitsu brown belt has faced and defeated a collection of top rivals during his seven-year professional career.

Mamedov (12-1) of Jersey City, N.J. via Derbent, Dagestan, Russia is a ferocious 25-year-old who is unbeaten in his last 10 starts, a streak that dates back to Aug. 1, 2010.  To date, Mamedov has made two appearances in the World Series of Fighting cage, scoring vicious, first round TKO’s on Leon Davis and Jimmy Spicuzza at WSOF 20 and WSOF 22, respectively.

Cobb (20-8) of Bakersfield, Calif. is a wrestling and Jiu-Jitsu expert who has produced submission finishes in 12 of his 20 career wins since his professional debut in 2004.  He holds notable victories over fellow standouts Rad Martinez, Drew Fickett, Kazunori Yokota and Ronys Torres.

Patino (38-15-2, 1 NC) of Houston, Texas is a native of Sao Paulo, Brazil who holds black belts in both Brazilian Jiu-Jitsu and Judo, and boasts the most one-night tournament competition experience of the six competitors slated for action, thus far, in the Nov. 20 affair.  Of the seven previous one-night tournaments he saw action in, the 42-year-old emerged the winner in five of them.

Zeferino (18-6) of Florianopolis, Santa Catarina, Brazil is a submission ace who has won 13 of his 18 career conquests by way of submission.  A new addition to the World Series of Fighting roster, the 29-year-old will make his promotional debut in the midst of a five-fight win streak.

Patishnock (6-2) of East Stroudsberg, Pennsylvania is a 27-year-old rising star and a three-time veteran of World Series of Fighting action.  Under the promotional banner, he holds victories over Igor Gracie and Gregor Gracie, both members of MMA’s legendary first family.

World Series of Fighting will announce additional details concerning the format and rules of the tournament, soon.

By David Lee 32 mins ago

By Larry Jhon 3 hours ago