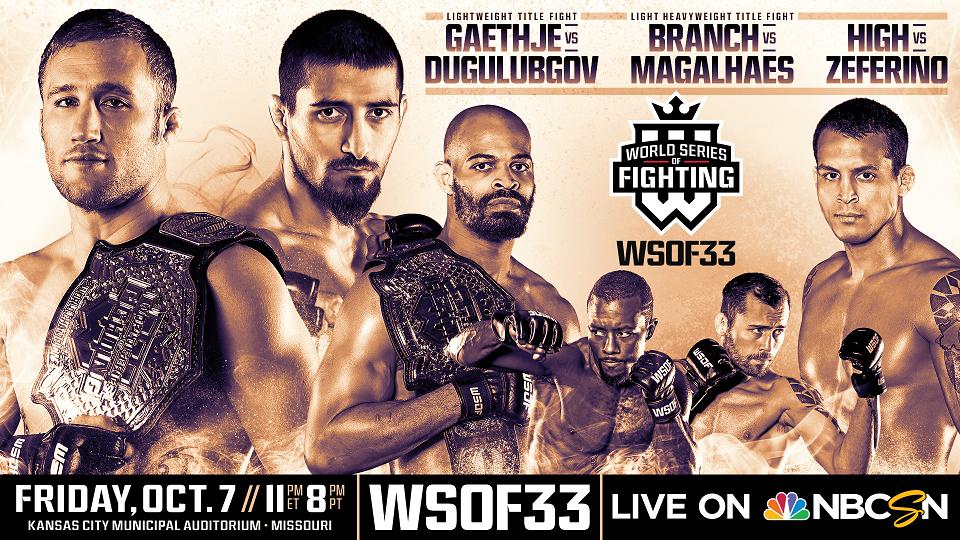 Priced from $20, tickets for WSOF33: Gaethje vs. Dugulubgov go on sale on Friday, Sept 2 at the Kansas City Municipal Auditorium box office as well as online at Ticketmaster.com and WSOF.com.

“This is, without a doubt, the most stacked fight card from top to bottom that we have put together, thanks in large part to NBCSN, which has given us a three-hour window for the first time since we launched on the network four years ago, to showcase our best fighters in action,” said World Series of Fighting President Ray Sefo.

In other action on the six-bout telecast, John “Doomsday” Howard (24-12) will collide with Abubakar Nurmagomedov (12-1-1) in a welterweight (170 pounds) matchup.

Kicking off the main card will be a heavyweight showdown between two World Series of Fighting newcomers and knockout artists – Shawn “The Savage” Jordan (18-7) and Ashley “Gio” Gooch (10-4).

The WSOF33 preliminary bout card will be announced soon.

Entering the World Series of Fighting decagon cage for the third time, the 5-foot-9, 34-year-old High of Kansas City, Mo. has been nothing short of spectacular in his first two starts.

In his promotional debut at WSOF25 on November 20, 2015, the UFC and Strikeforce veteran and 2009 DREAM Grand Prix tournament runner-up scored a highlight reel KO on Estevan Payan with a head kick-punches combination in the second round (:47) of their matchup.

High followed up the victory with an inspiring comeback against fellow star Mike Ricci. After taking punishment for the majority of each of the first two rounds, High went on the offensive and scored a devastating TKO on Ricci with an onslaught of punches in the second round (4:08) of their WSOF31 meeting on June 17.

The 5-foot-11, 30-year-old Zeferino of Middletown, N.Y. via Florianopolis, Santa Catarina, Brazil has earned a remarkable 15 of 20 career wins by way of submission.

The Brazilian Jiu-Jitsu black belt finished as runner-up in the first-ever World Series of Fighting one-night, eight-man tournament on November 20, 2015, suffering a second round (4:51) KO (punches) loss in the event’s championship round at the hands of Brian Foster, whom Zeferino had handily defeated earlier that night in the first stage of the tournament, by way of first round (1:46) submission (heel hook).

Following the win over Foster, Zeferino notched another first round (1:24) heel hook submission, this time on Jorge “Macaco” Patino, in the semifinal stage of the tournament. The result marked Zeferino’s seventh consecutive victory.

The 5-foot-7, 33-year-old Howard of Boston, Mass. is coming off a successful World Series of Fighting debut on June 17 when he earned a unanimous decision over Michael Arrant.

A 14-fight veteran of the UFC, Howard triumphed over the likes of Dennis “Superman” Hallman, Uriah Hall and Siyar Bahadurzada over the course of two different stints with the promotion, and earned “Knockout of the Night” honors for his first round (2:01) KO (punches) of Daniel Roberts at the ‘UFC Live’ event on March 21, 2010, as well as a “Fight of the Night” award following his split decision win over Chris Wilson at UFC 94 on January 31, 2009.

Nurmagomedov of Makhachkala, Dagestan, Russia is a 6-foot, 26-year-old protégé of Abdulmanap Nurmagomedov, the father and trainer of UFC superstar Khabib Nurmagomedov, and a 2014 Combat Sambo World Championships bronze medalist.

When he faces Howard, Nurmagomedov will look for his fourth consecutive win in the World Series of Fighting decagon cage, and his fifth straight win overall, following his crushing, second round (3:05) TKO (punches) of Matthew Frincu at WSOF30 on April 2.

To date, 10 of Nurmagomedov’s 12 career wins have come by way of either (T)KO or submission.

The stocky, 6-foot, 31-year-old Jordan of Baton Rouge, La. will make his much-anticipated debut for World Series of Fighting following a 10-fight stretch with the UFC, during which the heavy-handed fighter posted a strong, 6-4 overall record, with all of his wins coming by way of (T)KO.

A veteran of Strikeforce and Bellator action as well, Jordan is an accomplished athlete who earned a football scholarship to Louisiana State University (LSU) where he was a member of both the 2003 and 2007 national championship teams.

Gooch of Glendale, Ariz. earned his shot with World Series of Fighting as a result of his recent surge that has seen the 6-foot-3, 41-year-old emerge victorious in each of his last eight bouts, with all eight of the wins having come by way of (T)KO or submission.

By Adam Martin 20 mins ago