ROAD Fighting Championship announced the official opening of Xiaomi ROAD FC 046 which will take place at the Jangchung Arena in Seoul, South Korea on March 10, 2018. The main event will be Openweight Champion Mighty Mo defending his belt against former tournament adversary Myung Hyun-Man.

ROAD FC Openweight Champion Mighty Mo (12-5, Team Mighty Mo) is a 2-time K-1 World Grand Prix winner who also fought in DREAM and Bellator. He made his promotional debut in 2015 with a resounding 37 second KO of PRIDE legend Choi Mu-Bae. Mo then entered the first ROAD FC Openweight Tournament and defeated Choi again by TKO, submitted Myung Hyun-Man in their first meeting in the semifinals, then became the Champion when he rubber matched Choi Hong-Man. Since then, he has defended his belt twice. Mo brings 130kgs of pure power into the cage with a 70% KO rate from his kickboxing, boxing and MMA records.

Challenger Myung Hyun-Man (5-3-0-1, ROAD Gym) is a heavyweight Muay Thai standout of over 30 wins who transitioned to MMA in 2013. In the 2015 ROAD FC Openweight Tournament, he KOed his first opponent, and met Mo in the semis. The fight nearly went the distance with a thrilling stand up display from both knockout artists, but Mo got the submission win on the canvas in the third. Myung then faced the legendary Cro Cop in RIZIN, and suffered a repeat result. After two unfulfilling results – a win by a cut and a No Contest when Aorigele couldn’t recover from a groin shot, Myung ended 2017 with a second round face-plant KO of Chris Barnett.

Openweight Champion Mighty Mo will rematch Myung Hyun-Man for the belt, Mo’s only adversary to make it into the third round with him in the last 4 years. Fans can surely expect a war! 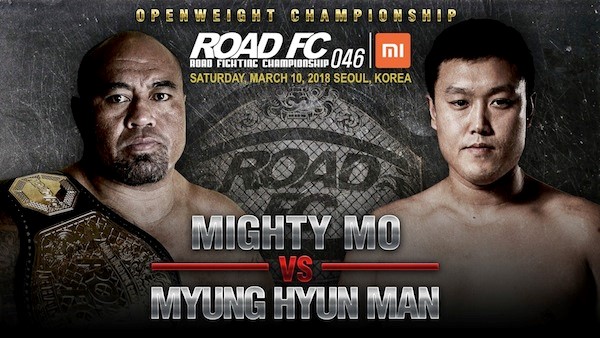