The card for LFA’s first trip to the Land of Enchantment is coming together as nine more additions have run the cards total to 11 fights for January 25.

The additions start with flyweight as UFC vet Joby Sanchez meets Demetrius “Coco” Wilson. Sanchez is 4-2 in his last six fights. The last time Sanchez fought on home soil, he won a decision over Jesus Urbina. Wilson comes in off decision win over Kevin Gray. 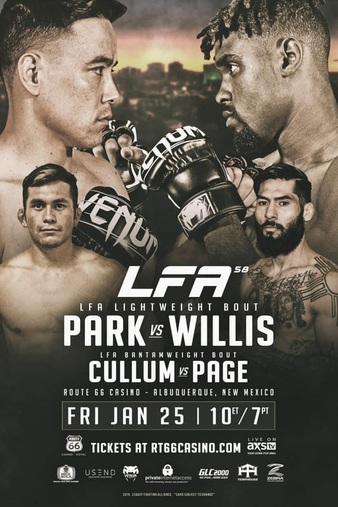 Former King of the Cage champion, Donald Sanchez squares off with Mexico’s Fernando Padilla. Sanchez has been fighting professionally since 2005, amassing a (35-21) mark between MMA, Boxing, & Kickboxing. This past August, Sanchez competed in the first Sparta Combat League one-night King of Sparta tournament. Where he won the boxing match in the quarterfinals and kickboxing match in the semifinals by knockout, before losing a decision to LT Nelson in the finals, an MMA match. Padilla comes in off scoring his 10th finish, 8th by submission, forcing Fard Muhammad to tap from a triangle choke at the KOTC 20th Anniversary event.

At featherweight, heavy handed Brazilian Luis Gavinho will collide with Alaska FC Lightweight champion Vincent Fricilone. Gavinho has 7 of 8 wins by knockout, while Fricilone has finished half his victories, with three of the four coming by knockout.

At lightweight from Fit NHB Sherwin “The Genius” Price faces BMF Ranch/JacksonWink representative Flavin Pilgrim. Price a former KOTC champion, has all five his win by stoppage, four by submission, including three rear-naked chokes. Pilgrim, a former professional surfer from Hawaii, training in New Mexico, won his first three fights by submission and comes in off a TKO from ground victory at Combate 22.

Opening the main card at Welterweight unbeaten Josh Moreno, who has three of his four wins by knockout, faces battled tested Brazilian Maycon Mendonca who’ll be making his fourth appearance in the LFA.

The prelims will see at Featherweight, unbeaten Israeli submission artist Natan Levy against Jacksonwink banger Henry “Boom Boom” Barahona. At welterweight Luttrell/Yee product Jalin Fuller makes his long-awaited pro debut against Texas’s Ricky Rosas. After spending most of 2016 and 17 competing as professional Boxer, Javier Cepeda will make his pro MMA debut opposing Ricky Esquibel, who Cepeda submitted in his final amateur bout. Esquibel has all 3 of his wins by submission, including a short notice win over Cameron Miller at LFA 28. The card also currently has one amateur match-up that will see Calob Ramirez from Luttrell/Yee MMA vs. Ozzy Chavez from Fit NHB.

By Brian Jensen 17 hours ago