Perhaps the most highly touted prospect this sport has ever seen, Aaron Pico makes his return to the Bellator cage this Thursday live on CBS Sports Network. Standing across the cage from him is 21-fight veteran John de Jesus, who is 1-0 in Bellator as of August 1, 2020. 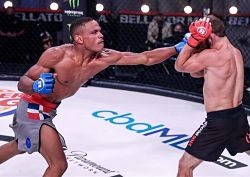 This fight is compelling for one real reason, Aaron Pico is a part of it. That’s no disrespect to John de Jesus, he’s a very good fighter that had one hell of a promotional debut, but Pico is a special, special talent many of us have had high hopes for since before he even made his professional debut.

Pico is the most hyped prospect this sport has ever seen, and that’s saying a lot considering there were guys like Rory MacDonald and Sage Northcutt. However, we’re going to talk about John de Jesus first. 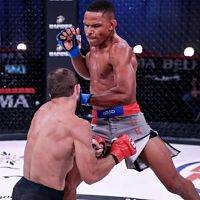 De Jesus doesn’t have the prettiest record at 13-8, but he has twice as many fights as Pico, and twice as many wins as him. He’s the more experienced man, and he’s 30-years-old, as opposed to Pico still being just 24-years-old.

De Jesus made his Bellator debut with a record of 12-8, and was coming off back-to-back second-round knockout victories coming in. His opponent was Vladyslav Parubchenko, who was 16-1 with 15 finishes, and de Jesus out-pointed him to get the unanimous decision (29-28, 30-27, 29-28) victory. 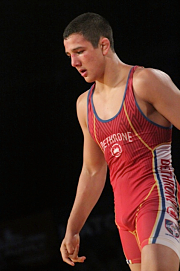 Pico caught everyone’s attention early on because he has such a deep wealth of wrestling and boxing experience. He started wrestling at age four, he started boxing at age ten, and he’s also competed in Pankration tournaments.

He has won the US National Wrestling Championships in freetyle, folkstyle, and Greco-Roman wrestling at the junior and cadet levels, which is really, really astounding when you consider how hard wrestling is. Not to mention, most wrestlers wrestle one style their whole life and only dream of even placing at a tournament like that.

As a sophomore in high school is when Pico started competing in senior level tournaments, and he placed at many of them, defeating numerous NCAA Division I talents, some of which were actually Division I National Champions and one of them being a former Senior World Champion. 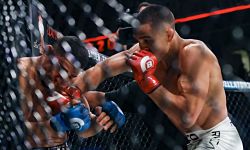 Pico then qualified for the US Olympic Trials, the first teenager to make that team in 40 years. And he did very well in the tournament, winning every match up until the finals. He won round one 4-2, but lost the second 3-4, and ultimately lost the third 4-4 on criteria, making him the 2016 US Olympic Trials runner-up. 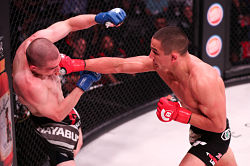 Then we move to his boxing, where he was also incredibly successful. He won the National PAL Championships in 2008, and was the National Junior Golden Gloves Champion in 2009, winning the Most Outstanding Boxer award in both tournaments.

Follow this up with being the 2008 Desert Showdown Champion (boxing), and the California State PAL Championship in 2008 (boxing), the same year he won one of his Pankration state titles, and this is why he’s been so highly regarded.

As far as him as a fighter though, it’s taken some getting used to for him. He lost his debut to an 8-2 opponent, as he was rocked with an uppercut and choked out (guillotine choke) in just 24 seconds.

Pico rebounded from this beautifully however, as he rattled off four-straight first-round knockout victories. These four opponents records in order were 7-3, 12-3, 18-8, 18-4. As you see, he’s literally been thrown to the wolves right out of the gate. 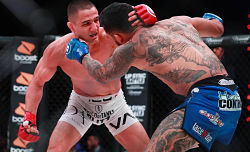 He was able to showcase his thunderous knockout power and crisp boxing in these four fights, and he started to do the same in his next against Henry Corrales (16-3), but he saw red once Corrales was hurt and got far too reckless, much like Cody Garbrandt has done in the past.

The result of this saw Pico get KO’d in 67 seconds, a fight he was doing so well in, a fight where the win was right there for the taking, but it turned into a learning lesson for him rather than a victory.

Pico then fought Adam Borics (12-0), and this is where we got to see how good his wrestling is, but that’s all we saw.

He did take Borics down repeatedly, every time he wanted to, except for the final attempt. Borics timed one of those takedown attempts perfectly and landed a vicious flying knee, TKO’ing Pico at 3:55 of round two.

At this point, our most touted prospect in the sport had a near .500 record, a surprise to us all, and he’d been hurt and finished in all three defeats. 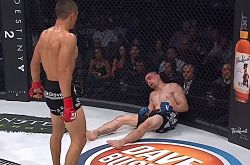 Pico stated himself, I know how to wrestle, and I know how to box, but I’m only learning how to fight. After that second-straight setback, Pico decided to move out to Jackson-Wink’s gym, and he’s looked incredible since.

Yes, Pico did knock Carey out with a left hook, which would stem from his boxing background. However, he faked a front snap kick just before cracking Carey with that punch. He set it up. He faked the kick so Carey’s hand wouldn’t be protecting his chin, and it worked out beautifully. He also out-wrestled Carey in round one, he mixed it up very well in this outing. 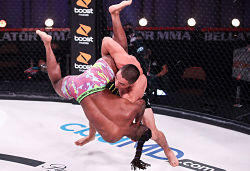 Then his last fight where he fought Solo Hatley Jr (8-2), who he took down early on and landed some vicious ground-and-pound on. We were seeing his evolution in this one too, it was the first time we’d seen him land real ground-and-pound.

We saw him use his wrestling twice before, against Borics and Carey, but it didn’t work out for him the first time because he didn’t mix it up enough. It did however work for him in the Carey fight, but he didn’t win the fight with it.

He was already showing us more on the ground than we’d ever seen from him, then he ended up submitting (rear naked choke) Hatley, something we didn’t really expect. 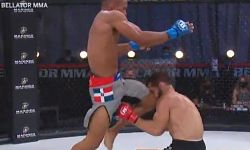 Pico will always be a dangerous striker, but we saw him secure his first submission victory of his career in his last fight. He’s been chaining everything together nicely and has gotten some good results from it since moving camps. It’s great to see him evolving into a well rounded mixed martial artist.

John de Jesus does hit hard, that’s something Pico will have to watch out for. As mentioned above, de Jesus doesn’t have the best record, but he is a very dangerous opponent.

No one expected him to win his Bellator debut and he did. Not to mention, three of his defeats come to current UFC talents. He also has some great flying knees, something Pico’s been finished with before. This is a great test to see where each talent is at in their careers.

How do you see this featherweight match up going?

By Blaine Henry 34 mins ago