We have a very, very exciting main card opener this Thursday, November 12, at Bellator 252, as undefeated welterweight contenders Yaroslav Amosov and Logan Storley go to battle in a three-round affair live on CBS Sports Network. 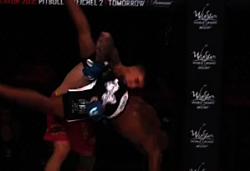 We’ll start off with their ages. Amosov is 27-years-old, and Storley is 28-years-old. Storley’s actually exactly 366 days older than the Ukrainian talent.

They’re both about to enter their athletic peak in the next couple years, which is incredibly exciting because they’re both already so good at what they do.

Both of these talents are so credentialed, it’s a wonder where to start.

Amosov didn’t even start training in martial arts until he found Sambo when he was 16-years-old, which is very surprising considering how well rounded he is and how seamlessly strings everything together. 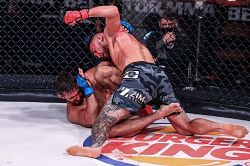 In Combat Sambo competition, Amosov won the World Combat Sambo Federation (WCSF) Championships three times, in 2013, 2014, and 2015, and he won the European Sambo Fighting Cup (ESFC) twice, in 2013 and 2014. He also won a couple bronze medals in the process.

Amosov’s now a Master of Sport in the art, and he decided to take on MMA next, where he’s also had massive amounts of success. Amosov won his first 16 fights with 16 finishes before defeating Roberto Soldic via split decision for the Tech-KREP FC Welterweight Championship.

Soldic is now 17-3 and the current multiple-time KSW Welterweight Champion. Amosov defended his title twice, both victories coming via submission, before joining the Bellator roster. 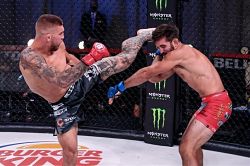 Since coming to one of the worlds leading mixed martial arts promotions, he’s looked nearly unstoppable, going 5-0 thus far in the promotion.

The Ukrainian prodigy followed this up with a unanimous decision victory over Ed Ruth, who is perhaps the best pure wrestler in the entire sport of mixed martial arts, and Amosov out-wrestled him, as well as out-struck him for three rounds.

This brings us to his most recent fight against Mark Lemminger (11-1), who he TKO’d at the end of round one via doctor stoppage, improving his record to 24-0.

Honestly, that fight didn’t even make sense to put on, we all knew what was going to happen. Perhaps they wanted to keep him busy, which we can’t argue with.

A fight we don’t know how it’ll go however is this one. Logan Storley is no pushover for anyone, and though Ed Ruth couldn’t keep up with Amosov in the wrestling department, Storley may be able to. 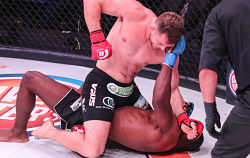 Storley started wrestling when he was just five-years-old, and he was pretty great at it. 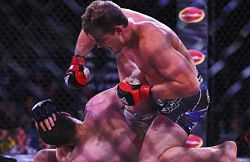 Since transitioning to mixed martial arts in mid-2015, he’s been perfect thus far as a professional, going 11-0 with eight finishes, all eight coming via (T)KO.

After starting out with a record of 4-0, he made the move to Bellator, where he’s dominated literally everyone he’s faced, just like Amosov. 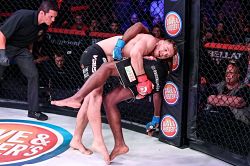 This is Storley’s first big test, and it’s also a pretty sizable test for Amosov as well, these are two of, if not the two most dominant talents in Bellator, and they’re not even title holders, yet. Storley’s sheer strength and wrestling ability is really something to behold.

Knowing Logan Storley’s a part of this fight, we’ve got to assume it hits the mat at some point. That’s where things really get interesting, both men have the ability to take anyone at 170 lbs down.

Who do you see winning this epic clash of Bellator welterweight contenders?